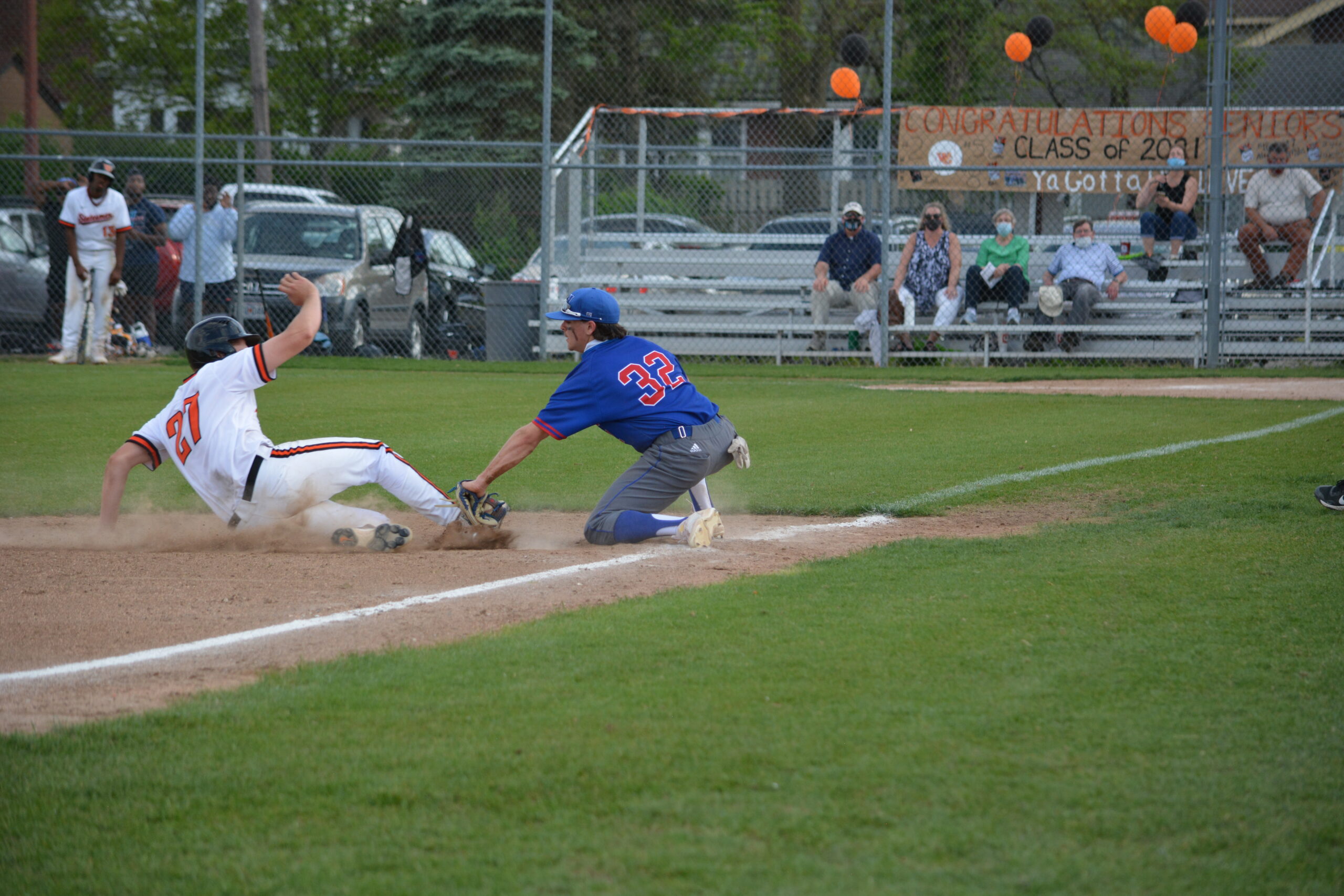 The Hillsboro Hawks Varsity Baseball team earned their third win in a row on Monday May 3rd, defeating Webster Groves 15-5.

Hillsboro Varsity Baseball hit the ground running on Monday May 3rd when they traveled to Webster Groves to take on the Statesmen. The Hawks scored 15 runs on 17 hits and only gave up five in the seven innings played, putting up runs in every inning but one.

“Right now I’d say we are just playing with more confidence which is key in this sport,” said Head Coach Kevin Lucas. “I feel like we are taking better at bats and guys have really started to trust the process.”

DH Zach Whaley started the game off with a double to left field. Connor Jenkins followed that up with a single, and Austin Romaine was struck by a pitch to load the bases up. Noah Shuman scored two runs on a double, and Andrew Chaves hit a sac fly to deep center field to score the third and final run of the first inning.

Micah Cook went the distance for the Hawks. Giving up 10 hits but only 5 runs, 2 earned. Cook silenced the Statesmen in his first inning on the mound and the Hawks were right back in the batter’s box to extend their 3-0 lead after the first inning. Cruz Valencia was hit by a pitch and moved to third base on a single from Whaley. Gabe King lifted a ball into deep left field to score Valencia, making the score 4-0 to enter the Webster half. The Statesmen got on the board in the bottom of the second, but Hillsboro was able to keep them to only the one run, leaving the inning up 4-1.

Romaine led off the third with a single up the middle, followed by Shuman and Andrew Brody who did the same. Tyler Watson hit a sacrifice fly to score Romaine, and Valencia hit a ball to the left fielder, who made an error that scored Shuman. Whaley came up to bat for his third plate appearance in as many innings, and laced a single up the left field line to score Brody. Hillsboro entered the bottom of the third up 7-1.

Webster struck back in the bottom frame by getting timely hitting and capitalizing on Hillsboro mistakes to make the game 7-4, but Romaine answered by ripping a triple into deep center field to lead off the fourth inning. Shuman grounded out, but it was enough to pick up an RBI. Chaves tagged a double down the left field line, and Brody drew a walk to put two runners on for Watson who doubled down the right field line, scoring them both. The score was 10-4 entering the bottom of the fourth.

Webster tallied their fifth and final run of the game in their half, scoring off a hit by pitch and an error, but the Hawks responded in the top of the fifth and got that run back when Romaine drew a walk and Shuman hit a ball to the towering right field fence to score him. That put the score at 11-5. Both teams were held scoreless in the sixth inning, but the Hawks defense really started to come alive. Romaine hosed a runner from center field who was trying to reach third base to highlight the defensive surge.

Whaley led off the seventh with a walk, and King dropped down a bunt to get on base. Jenkins then hit a comebacker to the pitcher, who made an error that scored Whaley, and Romaine reached base on a hit by pitch. Shuman ripped a ball into left field to score King. Chaves hit into a fielder’s choice, which scored a run, and finally Brody roped a single into center field to plate the final run of the game. The Hawks had a 10-run pad entering the bottom of the seventh, but the defense was not done shining yet.

A leadoff walk followed by a stolen base threatened to rain on the Hillsboro parade, but Brody at third base was having none of it. The second batter of the inning hit an absolute laser to Brody at third who made a spectacular leaping catch at full extension. He then fired the ball to Chaves at second who made the tag for the double play. A ground ball hit to Shuman at shortstop ended the game and the Hawks had won three straight.

Chaves commented on the adjustments his team has made to reach their recent success. “[The] adjustments we have made are all just mental things. When we go up the plate we have more confidence in ourselves. When we are in the dugout, we are on the fence cheering the whole time.”

“One of the biggest things that we as a team have improved is our plate approach,” said Watson. “We are more aggressive and are watching less strikes go by us, which is why we’ve been able to put up a lot of runs these past three games.”

Hillsboro has a busy week ahead of them. They play Perryville in a rescheduled rain out on Tuesday May 4th and then have back to back games against Windsor on Thursday and Friday May 6th & 7th.