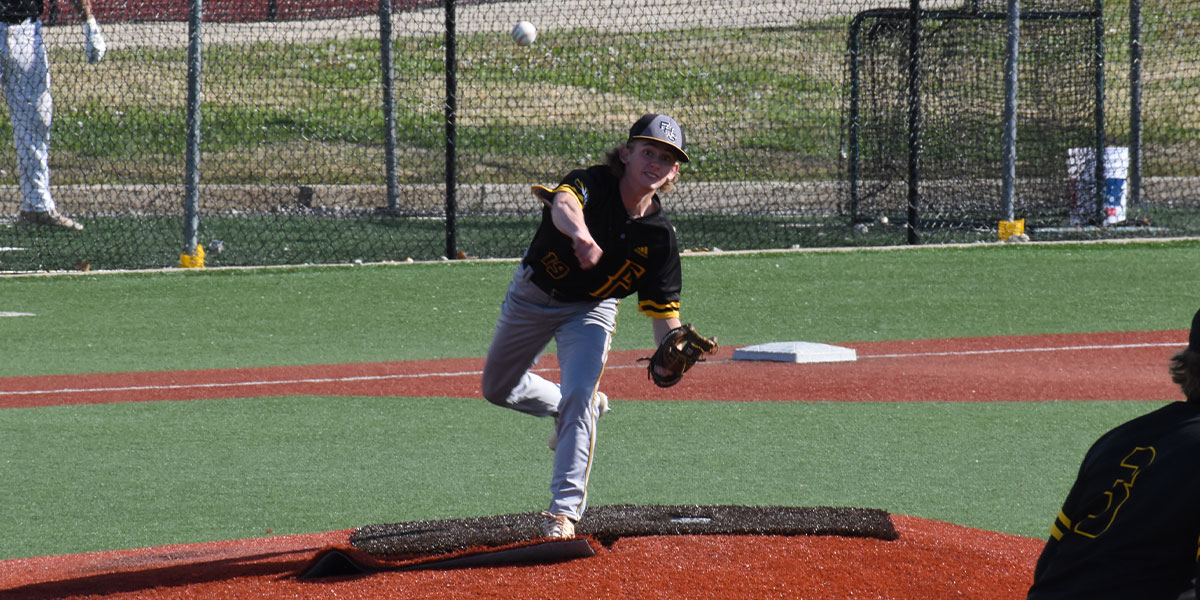 The Festus Tigers beat Winfield, but lose to both Farmington and Fox in the Farmington Wood Bat Tournament. They are 10-12 and are set to run up against The De Soto Dragons on Friday, May 7th.

The Festus Tigers Varsity Baseball team beat Winfield, but lost to both Farmington and Fox in the Farmington Wood bat tournament.

The Tigers game against the Winfield Warriors on Friday was full of offense. Winfield wasted no time and rallied to score four runs in the first inning. They added another run in the bottom of the fourth and put themselves ahead 5-0 in no time.

Festus came storming back in the top of the fifth as Connor Hulsey started the inning with a solo home run. Later in the inning, Collin Reando hit an RBI single that brought Trent Ellis in to score. The very next at bat, Nate Moore hit a bases clearing double that tied the game at five. Festus took the lead when Hulsey came back up for the second time in the inning and hit a two-RBI single that put them ahead 7-5.

Winfield scored one run in the bottom of the fifth to cut the Tiger lead to only one. However, Festus shut them down the rest of the way and secured the 7-6 victory.

Reando led the team with three hits. He also knocked in an RBI and scored a run. Husley was just behind with two hits and three RBIs. Moore also had three RBIs. The Tigers outhit Winfield 8-7.

Ethan Carroll started on the bump for Festus. He pitched four innings, allowed five runs on four hits and struck out three. Only three of his runs were earned. Kaleb Kennedy pitched the remaining three innings and gave up one run while striking out three batters.

The Tigers played another game that same Friday against the hosts of the tournament, the Farmington Knights.

The Tigers did not have much luck offensively in this game though. Farmington capitalized off a few Festus errors in the top of the fifth and rallied for three runs in the inning. Festus could only muster up two hits throughout the game and wound up losing 3-0.

The Tigers’ third and final game of the tournament came Saturday against the Fox Warriors. Sadly, it was a similar result for Festus.

Much like their previous outing against Farmington, there wasn’t much offense in the game from either side. Fox scored in the bottom of the fourth on a one-out RBI-single. That was the only run of the game for either side, and Fox handed the Tigers their second loss of the tournament.

The Tigers did record some hits, but they just couldn’t string any together to produce any runs. Seven different Festus players picked up one hit. Tyler Bizzle and Jackson Gross both were hit by a pitch that put them on base as well. Festus outhit Fox 7-5.

“I think we hit the ball well,” Hayden Bates said. “But we made too many errors.”

Brendyn Zohner started the game. He threw four innings, gave up only one run on two hits and struck out two batters. Connor McDonald was the only pitcher the Tigers needed in relief. He pitched the final two innings and allowed three hits.

Festus struggled to support their pitching and defense with runs throughout the tournament. Overall though, the team wasn’t unhappy with their performance.

“I think we did well,” Moore said. “We competed great in all three games.”

It can be frustrating when your lineup falls into a slump. The Tigers now sit at 10-12 and are looking forward to picking their aluminum bats back up. Their next challenge is the De Soto Dragons on Friday, May 7th.