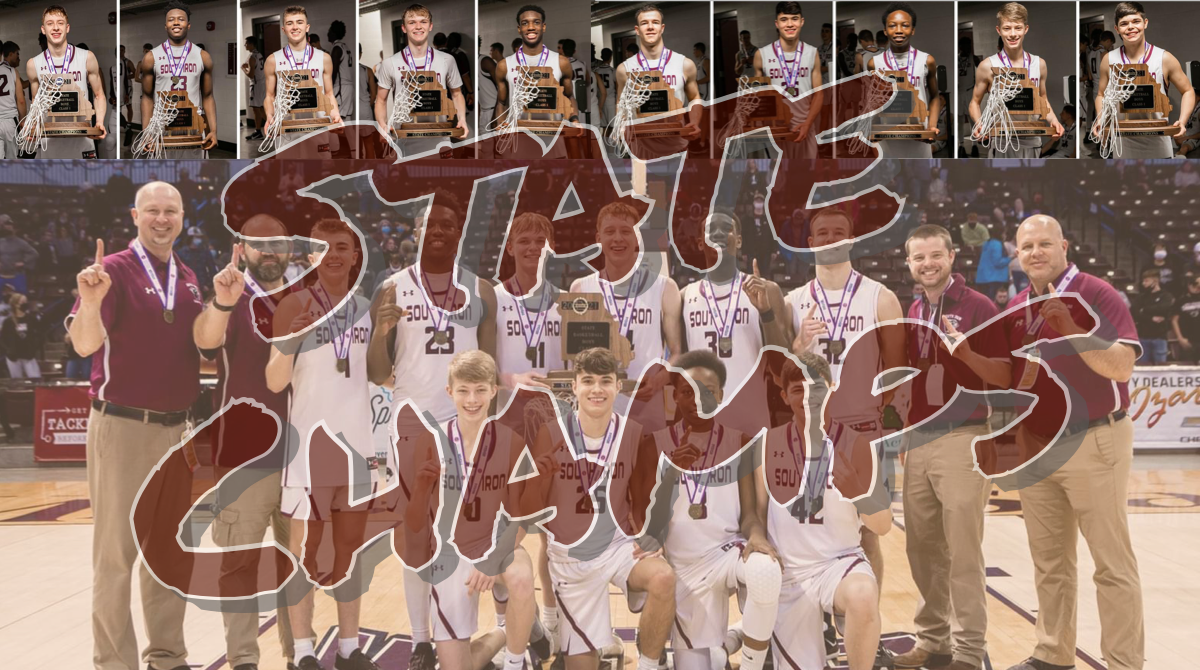 The South Iron Panthers cruise through the semis and slam down the hammer in the finals to win their first State Championship in 56 years. Head Coach Dusty Dinkins, the city of Annapolis and all the surrounding fans couldn’t be prouder of this monumental achievement.

The South Iron Panthers Boys Varsity Basketball team are Class One State Champions for the first time in 56 years!

The Panthers were crowned 2021 Class One State Champions on Sunday with a pair of dazzling performances over Higbee in the semi-finals and Mound City in the State Championship. It was the program’s first taste of ultimate glory since 1965.

We often hear the phrase “we’ll play anyone, anywhere”, and the 20-21 Panthers lived and breathed that as their mantra this season. The schedule they played was a who’s who of Missouri high school basketball programs. Teams like Vashon, Cardinal Ritter and CBC just name a few. Yet, this was the plan by head coach Dusty Dinkins. Dinkins knew in order for these young men to be the best they could be, they needed to play some of the best around… with the master plan ending with a State Championship.

Kudos Dusty! Cue the backstory as the Panthers ripped through the district, sectional and quarterfinal rounds, getting them right where they needed to be.

The Panthers came into the Final Four with just two more games standing in the way of their primary goal. The games took place in Springfield at Missouri State University in the massive JQH arena. On any other night, this floor would have been graced with the likes of Missouri State Bears Division One athletes. For this weekend, and forever in the back of their minds, the Panthers made it their home.

The first obstacle that stood in the way of perpetual glory was the Higbee Tigers in the semi-finals. South Iron won the opening tip and got to work right away. Drenin Dinkins sank the first shot of the game from beyond the arc to give the Panthers the lead instantly. On Higbee’s first possession, Brock Wakefield jumped into the passing lane and stole the ball that led to a layup at the other end of the floor. Higbee missed a shot on their next possession and Wakefield got out and running again. He threw down a thunderous two-handed jam that gave South Iron a 7-0 lead in the blink of an eye. Higbee quickly learned why South Iron is ranked the number one Class One team in the state of Missouri. The Panthers led 19-10 by the end of the first.

Higbee had a hard time keeping up with South Iron’s pace and that became evident in the second quarter. Dinkins hit a layup and was fouled at the start of the quarter. He converted the free-throw that extended South Iron’s lead to 12. The Panthers didn’t look back. They continued to play fast and score fast-break points at will. Wakefield capped off the half with a contested layup that put the Panthers up 47-19 at the half. South Iron won the second quarter 28-9.

South Iron continued to dominate all aspects of the game into the second half. Their lead floated around 30 for the rest of the game. The Panthers outscored the Tigers 18-14 in the third and 10-7 in the fourth. South Iron won 75-40 and vaulted themselves into the State Championship.

Dinkins led the team with 21 points. He earned himself a double-double with ten rebounds as well. Wakefield flirted with a triple-double with 16 points, eight rebounds and nine assists, while Jermarco Burse scored 15 points and pulled down ten rebounds. DJ Prater scored ten points as well.

The very next day South Iron met their Panther counterpart Mound City in the State Championship. Mound City is the number two ranked team in Class One trailing only, you guessed it, South Iron. They had only one loss before coming into the Championship and South Iron was determined to deliver them their second. Neither South Iron nor Mound City had lost to a Class One team the entire season. 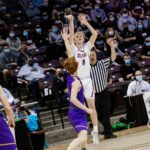 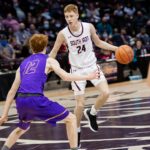 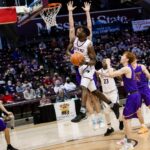 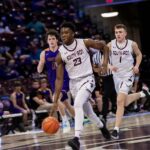 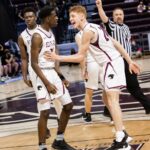 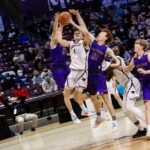 The national anthem filled JHQ arena just before the spotlights were flipped on and the starting lineups were announced. It is about this time both sides realize they’re just four quarters away from putting their names in the record books forever. For South Iron, it was all smiles. The moment was huge, but for them, it was business as usual.

Wakefield started the game off with a mid-range jumper that found the bottom of the net. Baskets from Prater and Lucas Lunyou gave South Iron an early 6-2 lead. South Iron’s zone defense gave Mound City fits early on. On top of that, Burse was a terror pulling down rebounds and cleaning up missed shots in the paint. He had five points by the end of the quarter and South Iron led 13-4.

Mound City came alive and flipped the game on its head in the second quarter. Their leading scorer Tony Osburn began to heat up. He hit an impressive pull-up three-pointer that injected life into the rest of the Mound City squad and allowed them to cut into South Iron’s lead. Wakefield hit a layup to put South Iron up five. The very next possession Osburn pulled up from the bear logo a few feet inside half court and banked in another three. He hit another three a few possessions later to tie the game at 26. South Iron was doing everything they could to slow him down, but struggling to do so. However, Wakefield wouldn’t let Osburn take all of the shine. He continued to make tough shots and kept his team within reach. Mound City scored 25 points in the second quarter and took a one-point lead into halftime.

Right out of halftime, Osburn hit another three from way downtown that extended Mound City’s lead to four. South Iron had enough and successfully put out Osburn’s fire shortly after. Mound City could not say the same for Wakefield. He continued to take control of the game and helped his team wrestle the lead back.

Burse had a huge block that he then collected and pushed up the floor himself. He dished the ball off to Prater who nailed a layup that put South Iron up three. The block and bucket injected some life into South Iron and its fans. Prater hit another layup off of another steal one possession later. Mound City began to take quick shots, was careless with the ball and played right into South Iron’s hands. The Panthers were back in control and ahead by five with 3:08 left in the third.

Then, Burse took a charge from Osburn that forced him to go to the bench with his fourth foul of the game. From there, it was all South Iron. Burse continued to be an absolute menace in the paint. It felt like he grabbed every offensive rebound available and cleaned up almost every South Iron possession. Four straight points from Burse gave South Iron an eight-point lead into the final eight minutes. 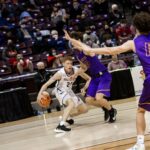 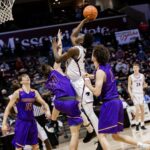 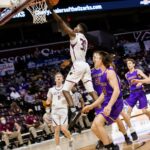 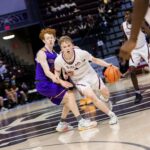 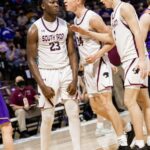 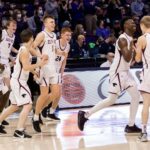 A pair of buckets from Dinkins and Wakefield to start the fourth put South Iron ahead by 11. Mound City went cold from downtown. The South Iron defense did a good job of forcing them into quick shots and Mound City stopped hitting them. South Iron kept their double-digit lead intact, creating an uphill battle for Mound City. With 1:38 to go South Iron was ahead by 23 and began to sub out their starters. Prater and Dinkins were the first to hit the bench. Lunyou, Wakefield and Burse checked out shortly after. The score was 69-50 as the final seconds ran out. South Iron’s bench cleared and rushed to center court to embrace each other.  The Panthers would return to Annapolis as Class One State Champions for just the second time in their history.

“It is an amazing feeling to be able to accomplish this,” Wakefield said. “Winning a state championship has been at the top of our list since we’ve started playing basketball together.”

This group of young men has been playing together since some of them first picked up a basketball. Seeing them accomplish something of this magnitude together is beyond special.

“It feels amazing to win the State Championship with my brothers,” Dinkins said. “We have worked our whole lives to win a state championship and now that it happened it is just an incredible feeling.”

Burse sat out the entire season last year due to a knee injury. He was more than elated to end his high school career on top.

“I have never felt such relief and thankfulness at once,” he said. “We have been putting in work since toddlers and our coaches have demanded excellence from us since we were young… We set out a goal and did not let anything knock us off our path, and at the end it was most definitely worth it.”

This team ended the season 25-4. They won their last seven games in a row on the way to the title. Dusty Dinkins won his 400th game as the Panthers’ head coach and filled just about the only hole on his resume; becoming a State Champion. They graduate four seniors and will be sending two off to play college basketball. This is only a shortlist of the many accomplishments the Panthers achieved this season. A State Championship is just proof of what everyone in Annapolis knew this team was capable of. The goal for every team is always to win the last game of the season. Only one team can accomplish that feat. The 2021 South Iron Panthers are, and forever will be, champions.