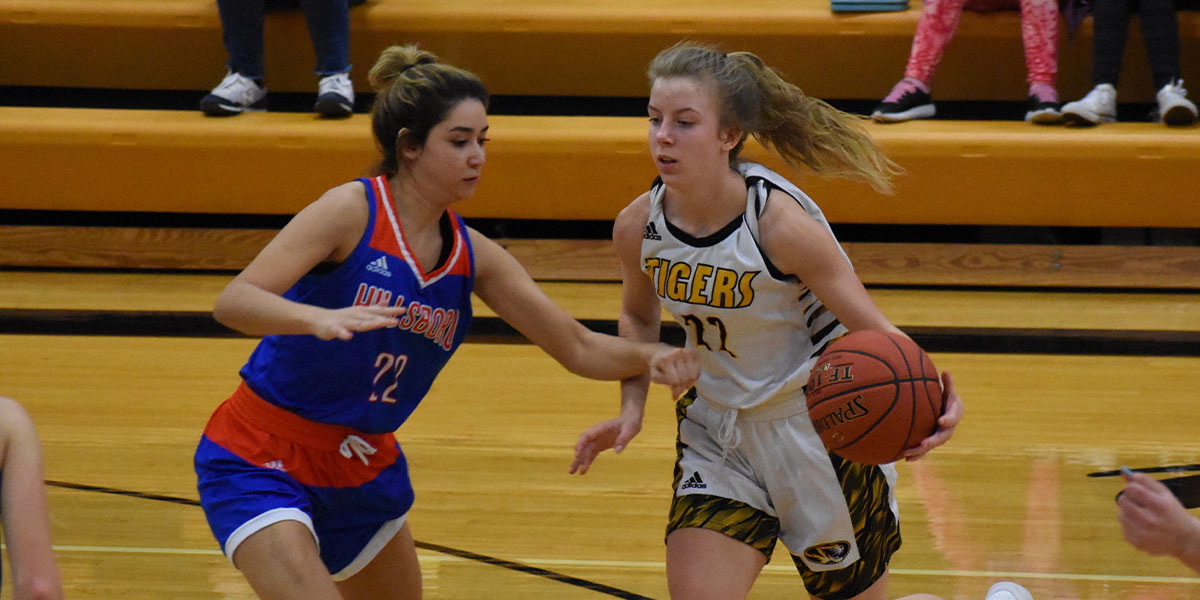 The Festus Lady Tigers Varsity Ballers loses to the North County Raiders 77-33 in the Class Five District Two semi-finals. Festus finishes their season with a 10-8 record… and motivation to grow in the offseason.

The North County Lady Raiders ended the Festus Tigers Girls Varsity Basketball team’s season on Monday in the semi-finals of the Class Five District Two Tournament, 77-33. The Tigers are 1-4 against the Lady Raiders dating back to 2018.

North County had a record of 18-3 this season and was the number one seed in the District Tournament. The Tigers knew this game wasn’t going to be easy, and that was evident from the opening tip. Festus struggled to score and only put up ten points in the first quarter. The Raiders scored the ball at will and led 20-10 by the start of the second quarter.

Festus continued to struggle to stop the Raiders. The Tigers had their best offensive quarter of the day in the second with 15 points, but North County added 21 more to their total, giving them a 41-25 at the half.

The Lady Raiders came into the second half determined to stop whatever offensive momentum the Tigers had. Festus was held to just three points in the third while North County scored 25. Festus trailed 66-28 going into the fourth quarter. North County wrapped things up in the fourth and secured the 77-33 win that sent Festus home for good.

“I’m extremely proud of the team for everything we accomplished this season,” Josie Allen said. “We definitely had a rough start, but we all learned from those games and it helped us get some big wins later in the season.”

Allen led the Tigers with 14 points. She also had five rebounds. She averaged 17.2 points per game this season and finished with 20 points or more six times. She also led the team with 7.7 rebounds per game.

“The whole team became super close this year, and we all grew as basketball players as well as people,” Allen said. “My hopes for next season are for us to get first in our conference and get further into districts. I’m already looking forward to playing with these girls this summer and next year.”

“Overall, this season was awesome,” Holt said. “We all accomplished so much whether it be individually or as a whole. This team has become my family.”

The Tigers started the season on a 1-5 skid but ended up turning things around and finished the year 9-3 which gave them a 10-8 record overall. The Tigers grew together as a team over the course of the season and their record is a direct representation of that.

“Our team is small, but we are quick, and that has been to our advantage in many ways,” Holt said. “I already can’t wait for next season, and to see the opportunities that come with it.”

This is a young Tigers squad that has a lot of room to grow and is motivated to do just that. Look out for this Festus team next season when they have another year of experience and a productive offseason under their belt.