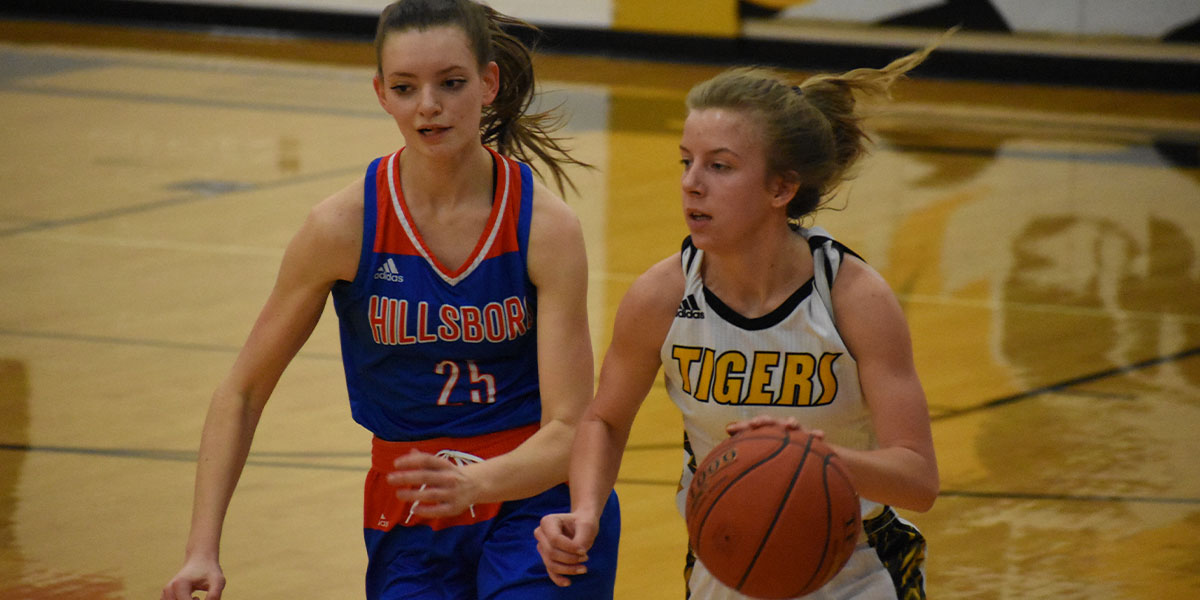 The Festus Tigers Girls Varsity squad win their first round district matchup with rival Hillsboro Hawks 41-35 on Saturday. The Tigers run up against the North County Raiders in the District Semi-Finals on Monday, March 1st.

The Festus Tigers Girls Varsity Basketball team won the latest rendition of the “Highway A Rivalry” in their First-Round District matchup on Saturday, taking down the Hillsboro Hawks 41-35. Festus is now 2-1 against Hillsboro this season.

The Tigers’ 9-7 regular-season record was good enough for the fourth seed in the District Tournament. They ran up against the fifth-seeded Hawks and were seeking revenge for their latest loss Hillsboro earlier in February. Both teams started slow and the game was tightly contested from the opening tip. The Tigers scored eight in the first and allowed the Hawks to score seven, giving Festus a slight lead heading into the second.

Hillsboro struck back in the ensuing frame. The Hawks added nine points to their total while Festus was only able to muster up four. Hillsboro went into halftime with a 16-12 lead.

Festus made some necessary adjustments at halftime though, and came out firing in the second half. They scored 14 in the third, which topped their previous two quarter totals combined. The Tigers were also able to limit the Hawks’ success and only allowed them six points in the third. Festus led 26-22 heading into the final quarter.

Then each side had their best quarter of the day offensively in the fourth. The Hawks scored 13, but it was not enough to overcome Festus’ lead. The Tigers scored 15 in the fourth and locked up the 41-35 victory that pushed them to the semifinal in the District Tournament.

“It was really great to come out with the win against Hillsboro and keep our season going,” Josie Allen said. “We were all super pumped to get that win. It was a big week for us and I couldn’t be any happier with how our team played.”

Allen, Emily Holt and Mya Courtois did the scoring for the Tigers. Allen led the team with 16 points while Holt was just behind with 15 and led the team with ten rebounds, giving her a double-double. Courtois had eight rebounds and Allen had six.

“It felt awesome to be a part of that!” Holt said. “Coming into this game our team knew that we were capable of winning this. We did have some trouble in the first half with our shots falling, but we were able to pull through in the second half. This game was full of so many emotions for sure.”

The win bumps the Tigers’ record to 10-7 and puts them one step closer to taking the District Title. However, the journey does not get any easier. The number one seeded North County Raiders await Festus in the semi-finals. Their matchup takes place Monday, March 1st with a trip to the district championship on the line.