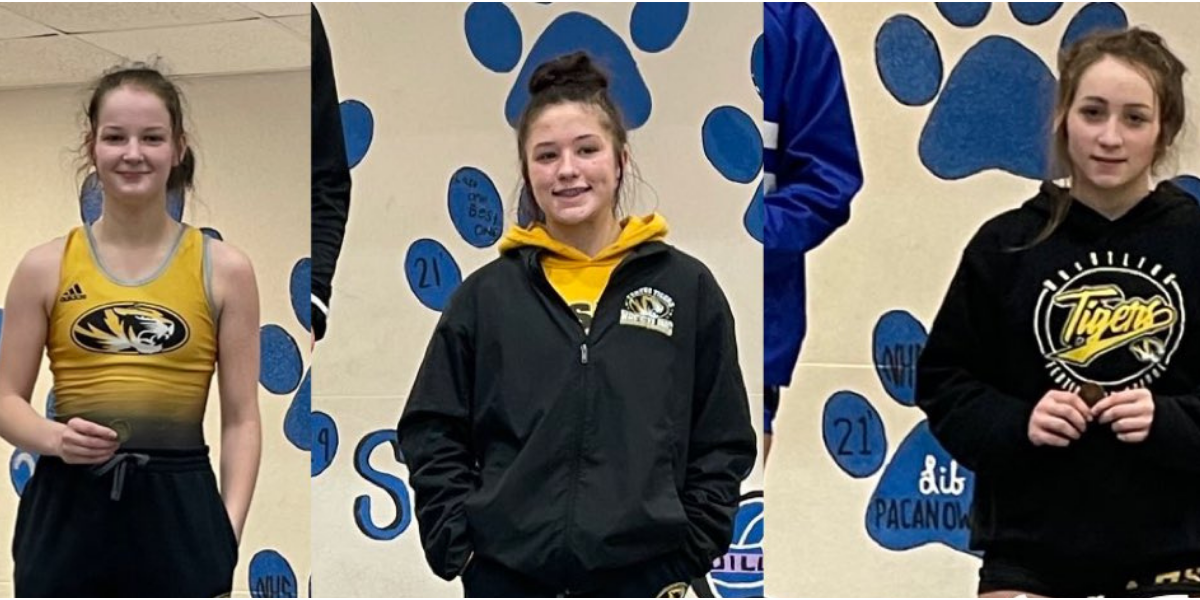 The Festus Tigers Lady Wrestlers bring home one Gold and two Bronze Medals from the District tournament, as three girls qualify for Sectionals.

The Festus Tigers Girls Wrestling team competed this past weekend at the MSHSAA District 1 tournament in the first leg, en route to the State Tournament. The Tigers had a good day, scoring 60 team points, finishing in 8th place out of 23 schools. Head Coach Jason Nahlik said, “We have a great group of girls that work hard and are very coachable. We outscored every team that had the same number of girls as us, and one team with even more girls.”

Wrestling at the 107 lb. weight class, Lee Ann Dobbs brought home the Bronze Medal and 16 team points. She won the quarterfinal match by pin in 2:39. Next, she lost the semifinal match by decision 11-8, moving her to the consolation bracket. She won the consolation semifinals by pin in 2:27, and then won the third place match by decision 10-6. She advances to the Sectional tournament.

When asked how she felt, Dobbs stated, “It felt amazing knowing even the little stuff you can do at home can help you a lot, and that you have a team to help you through it all.”

Nahlik appreciated the toughness shown by Dobbs, and said, “Lee Ann had a great District tournament. She was very close to upsetting the number 1 seed in the semifinal match. She lost, but then came back and won her next two matches to take third.”

At 112, Kirsten Klein had a tremendous showing, winning first place and 22 team points. She won her semifinal match by pin in 1:16. Then, she won the Gold Medal by decision 5-2 in a hard fought match. By winning, she qualifies to compete in the Sectional Tournament. Nahlik commented, “We are very excited to have our first ever District champion in Girls Wrestling.”

Klein had this to say about her effort, “It felt amazing to win districts after all of the work I’ve put in as well as the other girls on the team. Hopefully this will encourage other girls to come out. Seeing how successful our girls team has been in so little time, I hope other girls see that and decide they want to at least try the sport.”

She went on to say, “In the time leading up to sectionals, I will continue working as I have all season. Doing my extra- conditioning and practicing hard. When it comes down to the matches, I know how bad I want to go to state and I need to work for it to keep my lead against those other girls. I’m not settling for anything less than my all anymore.”
Sarah Gazaway, at 117, went 1-2 on the day, earning four team points. She lost the quarterfinal match,which put her in the consolation bracket. She then won her first consolation match by pin in 2:44, but was defeated in the consolation semifinals and ultimately eliminated from the tournament.

At 122, Lauren Mills found herself on the podium, bringing home a Bronze Medal, and 18 team points. She won her quarterfinal match by pin in 3:28. She then lost the semifinal match, putting her in the consolation bracket. She won the consolation semifinals by decision 4-2, and then won the third place match by pin in 4:41, qualifying for Sectionals. Nahlik noted, “Mills fought back after a tough semifinal loss by beating a State qualifier from last year and then pinning her last opponent to take third.”

Mills added to that with this statement, “It felt good to know that hard work will pay off and make me more excited for what the rest of the season brings, and years to come.”

Nahlik knows there is more work to be done, and said, “At this point in the season we are working on conditioning and drilling the moves that we have taught all year. The wrestling season is long and grueling, and for three Festus Tigers, the grind isn’t over yet.