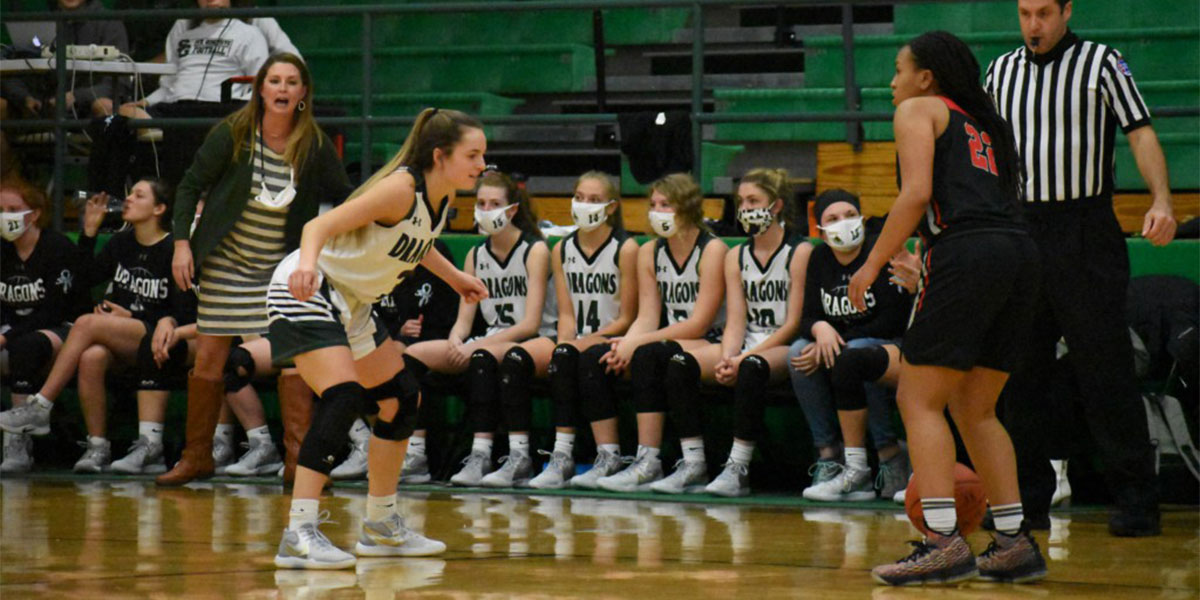 The Ste. Genevieve Lady Dragons beat the Park Hills Central Rebels on Monday and are crowned MAAA Large School Regular Season Conference Champions for the third consecutive season. The Dragons previously lost to the Rebels in the championship game of the Park Hills Christmas tournament just a month ago.

Ste. Gen. came into this game looking for revenge for their loss to the Rebels in the championship game of their Christmas tournament just a month ago. The Dragons had that loss on their mind when they started this game on fire and took a big lead early. Megan Aubuchon made the Rebels pay with eight points in the first quarter, and Marysa Flieg chipped in four as well. Ste. Gen. locked up Park Hills early and only allowed them two points in the quarter. The Dragons led 17-2 at the start of the second.

Sydney Bumgardaner did her best to carry the Dragon’s momentum into the second quarter and got on the board with five points. Aubuchon, Abby Moore and Maci Reynolds all had a basket in the quarter as well. They held the Rebels to eight points and took a 28-10 lead into halftime.

Park Hills made some adjustments and were more effective offensively in the second half. They scored 14 in the fourth quarter, but continued to have a difficult time slowing the Dragons down. Aubuchon and Reynolds each added five more points to their totals in the third. Ste. Gen. outscored the Rebels 15-14 and maintained their lead into the fourth.

Park Hills was finally able to grab the edge in the fourth, but it didn’t matter as Ste. Genevieve sealed up the 53-41 victory. The win pushed their overall record to 15-4, and their conference record to 5-0, giving them the conference title for the third straight season.

“It’s an awesome feeling to watch this team grow. Our first conference title win was my freshman year and it’s crazy that I’m already a junior,” Moore said. “I think we made it happen working hard in the gym six days a week and working to find our full potential. I wouldn’t trade my team for the world.”

Aubuchon led the way with 15 points. Reynolds was just behind with 13 of her own. Moore and Flieg contributed seven points each.

“The girls, their defense right out of the gate was just phenomenal,” Head Coach Jordanna Walk-Robison said. “They wanted it and they showed up. Got a little scared there at the end but good teams make runs. They’re not just going to lay down… We were able to make a couple of free-throws there at the end and just seal the deal.”

The Dragons are thrilled to be crowned regular-season champions once again, but they still have more work to do. Their next challenge is the MAAA Conference Tournament. The tournament begins Saturday, Feb. 6th.