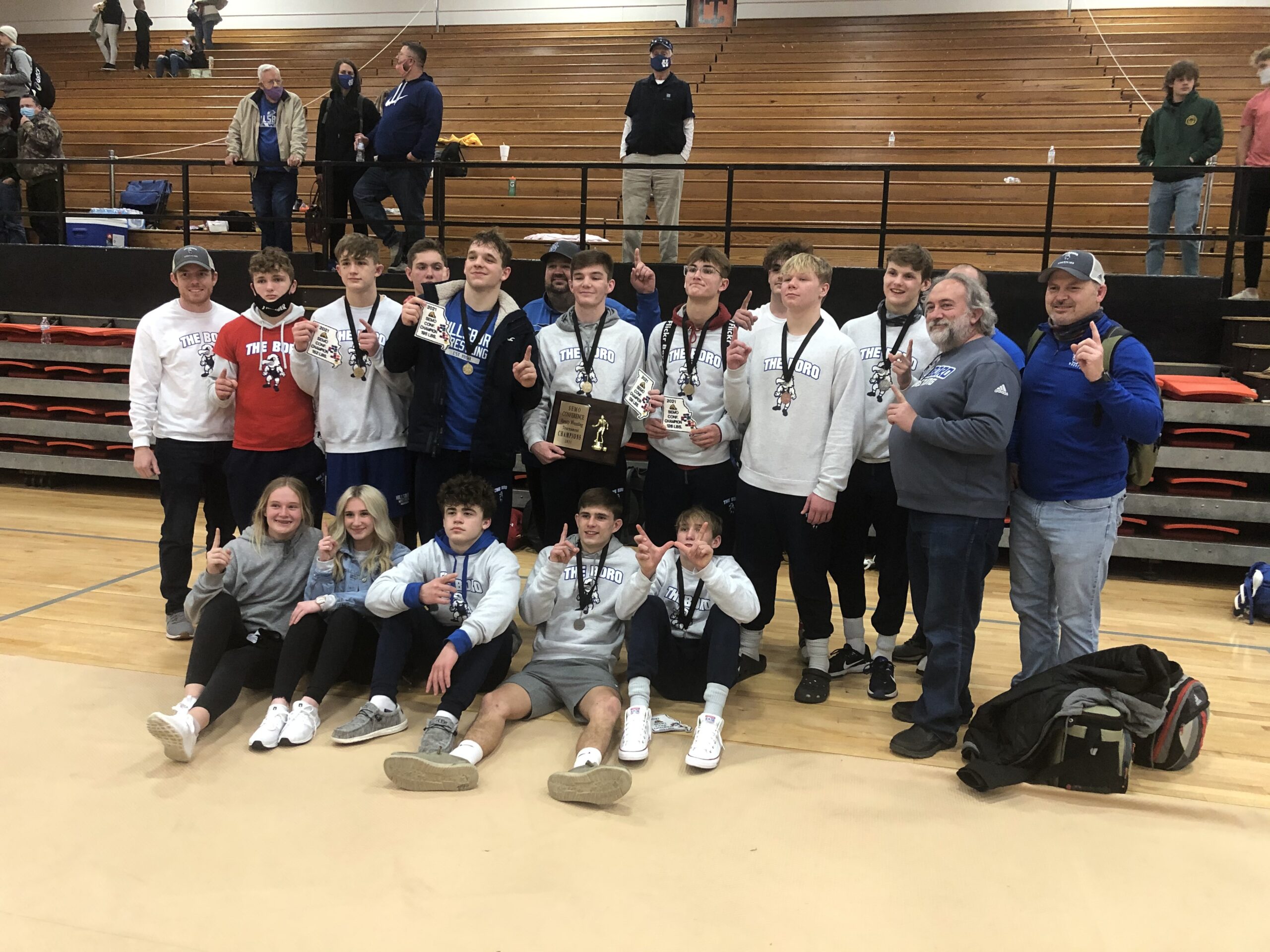 On Saturday, January 23, the Hillsboro Boys Varsity Wrestling team competed in the SEMO Regional Conference Class 3 and 4 tournament. Hillsboro outscored every team with 277 points, to come in first place out of eight. Not only did they win the tournament, but five Hawks came home with individual Gold Medals. Head Coach Matt Mitchell commented on how resilient his team has become, and said, “I was impressed most with the team as a whole. Just in the last two weeks they have really started coming together. They have each other’s backs and they fight for each other.”

This season has proven to be a challenge not just from the great competition but from the pandemic. Mitchell said, “On Wednesday we lost four starters to quarantine. So, going into this tournament we didn’t expect much from team standings. However, we didn’t change the goal. Each kid still wanted to place as high as they could and win the conference as a team. We focused a lot on bonus points because of being short handed, and we got a lot of pins. I think that was the biggest difference.”

Wrestling at the 113 lb. weight class, Gavin Alexander placed first, winning all five of his matches, four by pin. Mitchell noted, “Alexander had a great final match. He beat one of the top kids in the state. It was the first of maybe three or four meetings in the next few weeks with the Farmington kid. We will make adjustments and try to expand the score from the first win.”

Sam Richardson, at 126, won first place, pinning all five of his opponents. Mitchell has been impressed with his wrestler and said, “Richardson pinned everyone. He was dominant today. I think he takes kids off guard a little bit. I’m glad he is on our team.”

Dalton Litzsinger brought home the Gold at 138, winning five matches, four by pin. Litzsinger said he was mentally prepared, “I went into every match with the mindset to just have fun and wrestle hard.”

Griffin Ray, at 152, won first place by defeating five opponents, two by pin. “Ray was outstanding all day. He beat a kid from Jackson in the finals. He was tough on top and wrestled really well on his feet. He is advancing his level of wrestling in all areas. It’s fun to watch him develop as the year goes on. I’m excited to watch his postseason run,” said Mitchell.

At 182, Nicholas Green placed third, with a 3-2 record. All three wins were by pin. Green knows he needs to keep preparing, and said, “I will just keep training hard to get better and better everyday.”

Zach McNees took home the Gold by defeating four opponents, three by pin. Commenting on two of his top performers, Mitchell said, “McNees and Litzsinger both won their weight classes. They had solid days and wrestled well. I was happy to see them win a conference patch this year.”

At 285, Wyatt Yeager placed sixth, with a 1-3 record. Mitchell was pleased with the effort, and commented, “Yaeger filled in at the heavyweight spot this weekend. He took some losses but also picked up his first ever Varsity win. I’m happy he was able to get some experience.”

Litzsinger knows his team is ready for the upcoming challenges at districts, and said, “Our team has had a good season and we are just checking off some things we needed to complete on the way to a district title and a top three finish at the state tournament.”

Hillsboro will have one more tournament, in Warrenton on Saturday January 30, before they prepare for the district tournament taking place February 12th and 13th.

Mitchell said, “With districts, sectionals and state coming up we will stay focused on scoring bonus team points. It can make a huge difference in team standings.” The Hawks have shown consistency and grit all season and will look to continue their winning ways against the best competition in the state.

It seems the best is yet to come for these hungry young grapplers. Stay tuned.