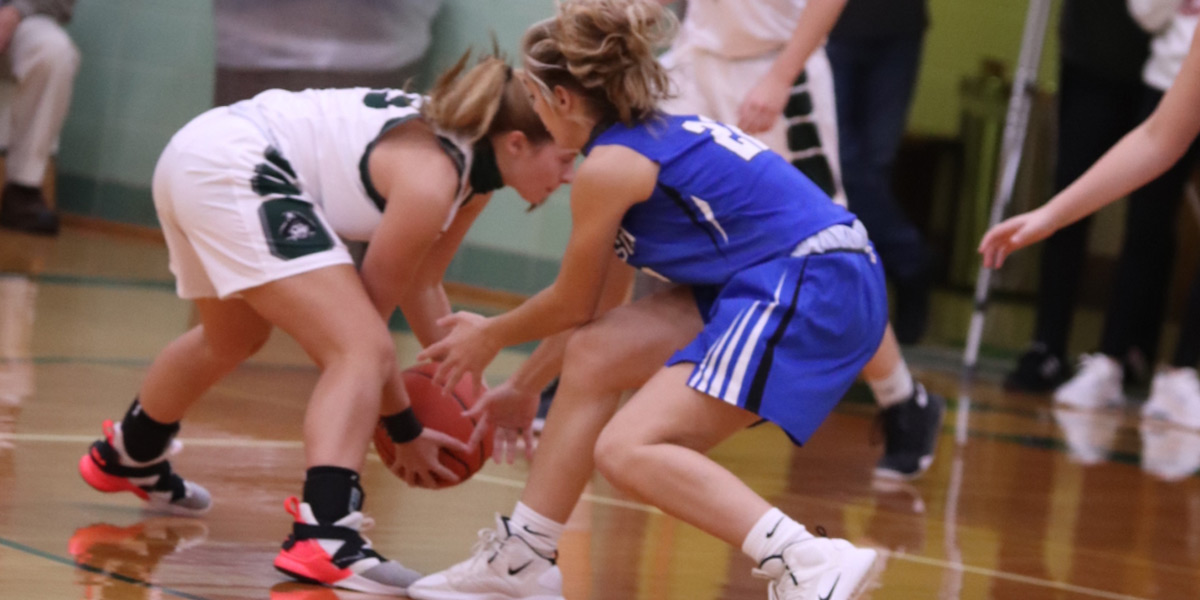 The Jefferson Lady Jays are playing a different type of basketball lately, coming together as a team and crushing their last two opponents. Utilizing a shutdown defense has been the biggest factor during this win streak… and they show no signs of slowing down.

The Jefferson Blue Jays Girls Varsity Basketball team took part in the Valley Caledonia Consolation Finals on Friday, taking on the Bourbon Warhawks (1-1) for the title. Jefferson came out in control of the game from the tip, and eventually won in convincing fashion 57-37.

After an impressive showing Monday night, taking down Bismarck 54-20 for their first win of the season, the Blue Jays looked to make it back-to-back wins against Bourbon high school, marking the first time the two teams have faced off this decade.

The Blue Jays came out in the first quarter on fire, hanging 19 points on the Warhawks. The Blue Jays defense proved to be too much to handle, holding Bourbon to just six first-quarter points. It was more of the same in the second quarter, and heading into the locker rooms at halftime, Jefferson owned a commanding 35-15 lead.

Reagan Kennedy was the game’s leading scorer at halftime, putting up 10 points on four shots from the field (one of which was a three) and a free throw. Senior Laney Smith wasn’t far behind in the scoring column, with an impressive first-half tally of nine points to her name.

The second half kicked off for Jefferson with another top-tier performance from the defensive side, allowing just four points in the third quarter compared to the Blue Jays’ 14. Then, down 29 in the fourth quarter, the Warhawks began to attempt a comeback, and although they won the fourth quarter 18-8, it was too little too late for Bourbon as Jefferson took its second win of the season 57-37.

It was a proud moment for Head Coach Zac McVey after the game, expressing his delight with the outcome.

“This was the best basketball the girls have played so far,” McVey said. “The energy and defensive effort was awesome from the tip-off, and they weren’t able to create offense off our defense.”

Smith ended the game as the Blue Jays’ leading scorer, ending the game with 14 points on 5-14 shooting from the field. While Smith’s offensive production was significant for the Blue Jays, her defensive contributions were even more prominent, racking up 11 steals and six rebounds.

Senior Catryn Cattoor had an excellent game for the Blue Jays as well, scoring 13 points, just one behind Smith’s game-high, on 5-7 from the field and 3-4 from the free-throw line. Cattoor led the Blue Jays in rebounding with seven, and also managed to add three steals.

Cattoor praised the team’s ability to create turnovers as a key in Jefferson’s success against the Warhawks.

“Our goal is to cause turnovers and put up a lot of fast points,” Cattoor said. “We still have plenty to work on, but I’m very excited about how we played.”

Kennedy’s monster 10 point first-half was crucial to the Blue Jays, and while Gabby Beffa may not have made her presence known in the scoring column, her contributions on the defensive end were enormous.

Beffa applauded the Blue Jays’ ability to play as a team following their Friday night victory.

“Everyone on the team played very well,” Beffa said. “We all worked as one cohesive unit and it was great to watch the team work.”

Now looking to make it three victories in a row, the Blue Jays will head to De Soto high school to take on the Dragons (1-2) Monday night.