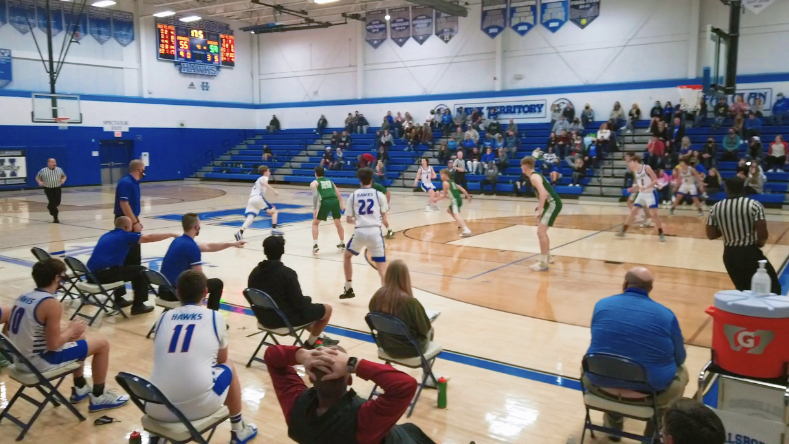 The Hillsboro boys varsity basketball team looked to even their season record at 2-2 as they took on the De Soto Dragons in the first round of the 65th Gene Steighorst Tournament. After coming off two losses in a row, the Hawks wanted to flip the script and get back into the win column. Unfortunately Hillsboro wasn’t able to pull off the win, and they dropped their third game in a row by a score of 61-55.

The Hawks were never out of it though, and they played fiercely, but missed opportunities that ultimately cost them the game. The loss to the Dragons ended the hopes of that .500 mark and dropped their season record to 1 and 3.

Head Coach Dan Johnson summed up the game perfectly for the Hawks. “We battled hard all night and made some big plays. We kept shooting ourselves in the foot with costly turnovers, which didn’t allow us to get over the hump.”

Hillsboro scored 12 points in the first, but found themselves down 15-12 after one quarter. As far as bright spots, Kyle Phipps popped a pair of three-pointers and Noah Holland chipped in with four points. The offense was sluggish in the second quarter though and could only muster nine points. The Hawks went into the half trailing 27-21.

Hillsboro did manage to come out strong after halftime though.  They put up 19 points on the Dragons in the third and trailed by just four going into the final frame. Holland went off and scored ten points while draining two three-pointers. Eric Schneider also contributed with four points in the third. Zach Whaley followed Holland in the fourth and had a 10 point quarter of his own. Whaley hit three three-pointers, but it wasn’t enough to propel the Hawks to a comeback victory, as they ultimately lost 61-55.

“As a team, we need to be a lot tougher. A lot tougher,” said senior Werner Finder after the Hawks lost another close game.

Noah Holland echoed the sentiment of his teammate, saying, “As a team, we need to be tougher overall. Less turnovers.” Holland was also asked how the team can improve on being tougher. “We go game speed every day at practice. No matter what. We try to go 100% every day for two or three hours.”

Holland led the team with 17 points while Whaley was behind him with 14. Phipps had eight, Schneider had seven and Ryan Cox had four. Finder added three points and Kyle Besand finished the team scoring with two points.

The Hawks play Windsor on Thursday at 7 pm and will try to get back to their winning ways.