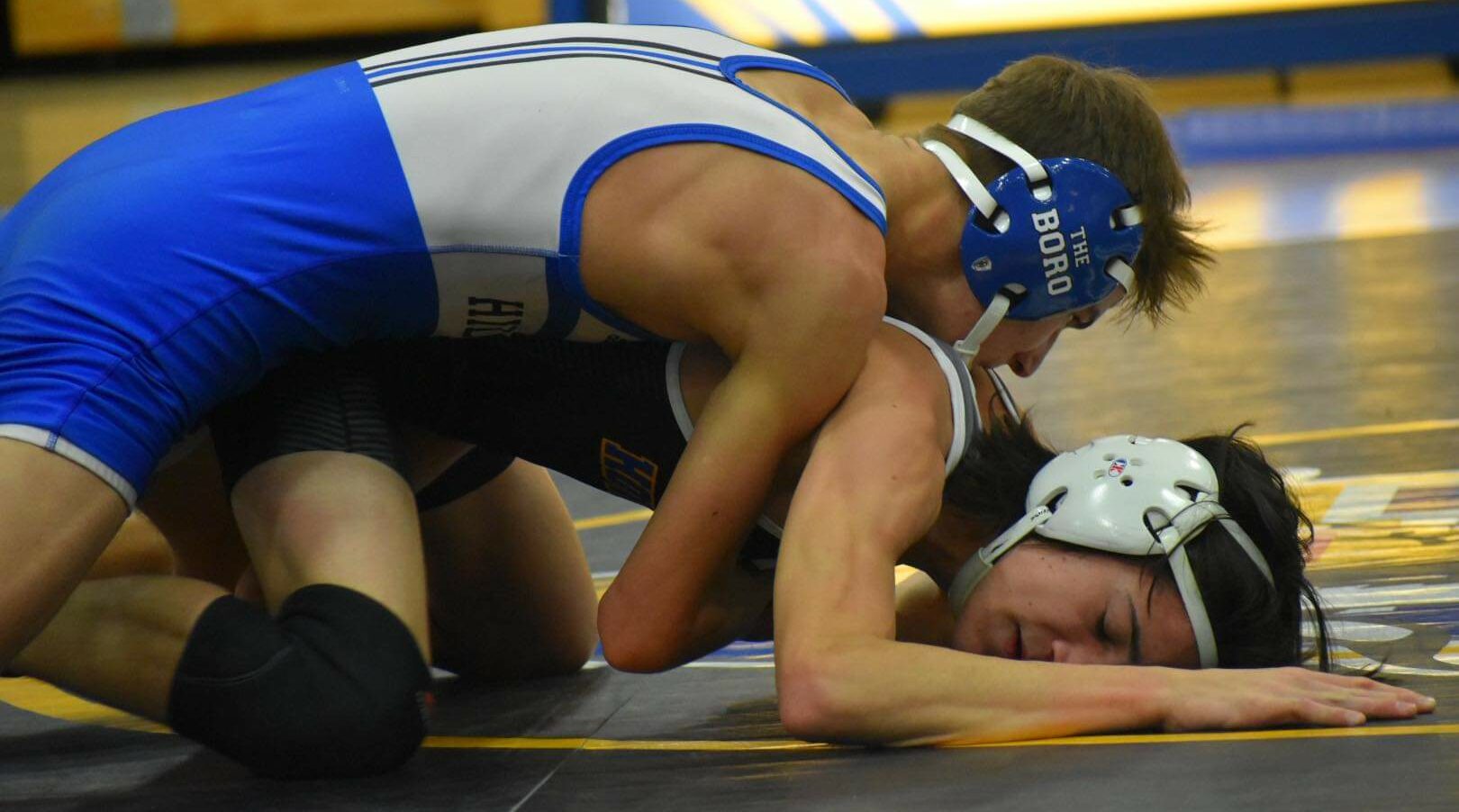 A dominant victory for the Hillsboro Hawks Boys Varsity team sets the wrestling season in motion, as the Hawks demolished the Francis Howell Vikings 40-18 in their first match of the season. Katie Hendrix wins the lone match for the girls, but the Boys JV squad comes up short 33-21.

It was a delayed start to the season, but finally, the Hillsboro Hawks got to actually wrestle an opponent. After 24 practices, and two meets being cancelled, on Thursday December 3, Hillsboro faced off against the Francis Howell Vikings, and took home the victory by the score of 40-18.

Head Coach Matt Mitchell commented, “It was nice to get out and really compete. Francis Howell is a great Class 4 team. I’m proud of our kids. there is always something to work on and get better at, but they had great intensity and focus tonight.”

Out of the 14 match line-up, which included a double forfeit at the 106 lb. weight class, the Hawks won nine. Gavin Alexander started it off at 113 with a major decision win earning four team points. Sam Richardson and Evan Morris both won decisions at 126 and 132 respectively, earning three team points a piece.

Dalton Litzsinger won with a pin at 1:59 of the first period at 138 for six team points. Litzsinger is excited to see what his team can accomplish and commented, “The team has been training hard for 24 straight practices and I felt very confident that each Hillsboro kid that stepped out there last night had a good shot at coming out with some team points. My goals for the season are to come out with a 3rd District title as well as a State Championship. We are a very young team with high expectations, and we are constantly working day in and day out.”

Raymund Barnett then took a decision win at 145, while Griffin Ray also had a big pin for the Hawks at 152. Ray believes in his team and himself, and said, “The pin was good for the team and the dual as a whole was great for the team. We came out with fire in us and you could see that when we were out there. We are making a statement this year, and my goal is to be a state champ, nothing else.”

Francis Howell stayed alive and won the next three weight classes in a row, until Zach McNees turned it around for the Hawks with a pin at 195 after an intense battle. McNees said, “It was almost a very rough start to the season, but I came through and came out with the pin. My goals for this year are to wrestle my best each and every match, and to make my teammates better every day.”

Hunter Rhodes followed up with an 8-3 decision win at 220, and Jordan Jarvis ended the night with a pin at 285.

There was one girls Varsity match on the night with Katie Hendrix earning a pin at 137 for the Hawks.

Meanwhile, the Junior Varsity Hawks lost their dual meet 33-21. Of the 10 match dual, the Hawks managed four victories. Blake Jackson scored a pin at 126. Nathan Angle and Gavin Griffin also won with pins at 138 and 152, respectively. At 285, Wyatt Yaeger earned a 4-1 decision victory. In an exhibition match, Trevor Barrett won by pin, as well.

Richardson and Rhodes, both Freshman, had impressive Varsity debuts, defeating Senior state qualifiers. Mitchell was enthusiastic about their performances and said, “These two have been working really hard in the room. It’s not an easy thing to come in and compete as a Freshman and they have really elevated their wrestling in a short amount of time. They are both doing great things. I’m looking forward to watching them compete all season.”

Morris’ win was also big in that he too, beat a returning state qualifier. Mitchell noted, “Morris has maybe put in the most work this past summer. Any chance he got, he was working out and in the wrestling room practicing. I’m happy to see the hard work and time investment paying off. He is going to have a great year.”

This 20-21 season will be unlike any other in recent history due to the Covid-19 restrictions and limitations. However, Mitchell believes his team will still endure, and is incredibly grateful of the contributions he has received from the families. Mitchell said, “Thank you to all my parents. They have really stepped up to help us with all the Covid guidelines and transportation. I just can’t say thank you enough to the support this team has gotten so far this year.”

The Varsity Hawks will be in action tomorrow at the Ron Sauer Tournament at Seckman High School. Wrestling starts at 9 A.M. and will be broadcasted over Facebook Live.