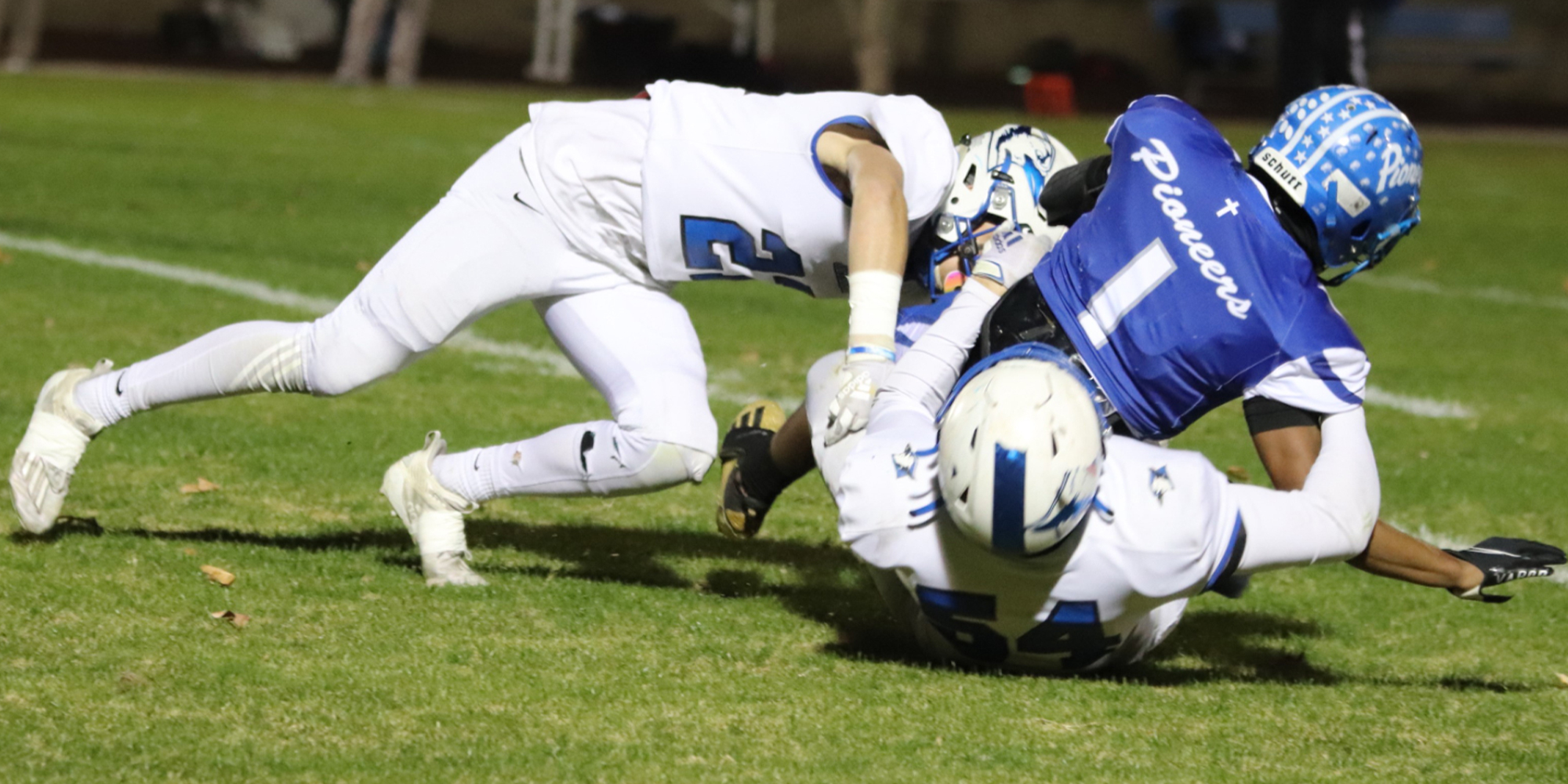 The Jefferson R-7 Blue Jays make history with their first ever State Tournament victory by rolling Duchesne 24-6 in the Division 1 Class 2 Quarterfinals. The ground game once again sizzles as the defense holds like a smothering blue wall.

More history has been made for the Jefferson R-7 High School Varsity Football Program. Last Friday 11/20, the Blue Jays advanced one step further in the Missouri Class 2 State Tournament, defeating the Duchesne Pioneers handily by the score of 24-6. This marks the first time that Jefferson has been to the football final four in the school’s history.

Jefferson is playing some incredible football and is peaking at the perfect time. In fact, the win against Duchesne marked their seventh consecutive win, improving to 9-2 overall. The Blue Jays have outscored their opponents on the season 395-157.

While this game was not quite the offensive show seen in previous weeks, Jefferson’s defense remained dominant, not allowing Duchesne to score until the final two minutes of the game. Head Coach Alex Rouggly, who has been motivating his team quite successfully this season, said, “Our team believes in themselves and their abilities. The confidence that our kids are playing with has really helped us throughout this playoff run.”

At 8:03 of the second quarter, Jefferson gave the ball to Dylan Schnitzler who hammered it home from three yards out for the second touchdown. W. Breeze again nailed the kick to double the score making it a 14-0 game after one half.

The third quarter was a defensive stand off as neither team was able to capitalize and get points on the board.

To open the fourth quarter, Jefferson went back to their stud Ott who smashed in a four-yard touchdown run at 9:11. W. Breeze tagged the extra point making it a three touchdown lead, 21-0. Ott mentioned the game plan and said, “We knew if we kept running the ball and didn’t turn it over we could control the clock and win.”

With 3:57 left in the game, Rouggly sent out W. Breeze to try a field goal from 21 yards. He hammered it home giving Jefferson a 24-0 lead, putting the game out of reach for Duchesne. W. Breeze said he was ready for the opportunity, “I wasn’t nervous because I saw it as another extra point. Thanks to the blockers on each side of the ball, I had a great chance of making it.”

Duchesne did manage to score a touchdown on a 64-yard bomb, but with only 2:21 to go, the game was effectively over. Duchesne missed on the two-point conversion, making the final score 24-6.

Rushing was the primary mode of offense for Jefferson. No surprise, they spread the ball out among five players. D. Schnitzler handled the ball 33 times for 178 yards and one touchdown. Ott was next with 11 carries for 64 yards and two touchdowns. Will Schnitzler rushed nine times for 27 yards. Quarterback Drew Breeze also got in on the action with six carries for 24 yards. Finally, Sean Usery managed three yards on three carries. D. Breeze commented on his team’s ability to rush the ball, “The run game was just working in our favor so we stuck with it. Why wouldn’t we when we have three diesels in the backfield?”

Ott also led the way defensively with five tackles. W. Schnitzler and Steve Stephens were right behind him with four each. Dawson Jakoubek had three tackles of his own as well, while W. Schnitzler and JJ Irwin each came up big with a fumble recovery.

Jakoubek was outspoken about what is motivating him and the team right now, “Our coaches are on us all week about making history which is one motivation. I also saw some projections of our game and it said that we were going to lose. I showed that to some of the boys and it fired us up. I just love to come out and compete every Friday, and we don’t want it to end.”

Rouggly said about next week’s opponent Lamar, “They are very physical, very disciplined, with great team speed. We have a lot of respect for the Lamar Tigers and the history that they have established within their football program. Lamar is one of the meccas in Missouri high school football. We look forward to the opportunity to go down and play in a great high school football atmosphere. Our kids want this extremely bad, as do theirs.”

In preparation for the next game, Jefferson will build on its strengths. “We will prepare the kids like we have been all year. Focus on the things that we control, and leave no doubt on how hard you play every snap during the football game,” said Rouggly. D. Schnitzler also commented on what they will do to improve for next week. “We have to prepare for their offense and we just have to refine our plays. We also need to study film.”

Jefferson is now just two wins away from becoming the Missouri Class 2 State Champions for the first time in the school’s history, but they must first get through the Lamar Tigers. Jefferson travels to Lamar with the game taking place this Saturday, 11/28 at 3:00 P.M. with the winner advancing to the state finals the following week.

Will Schnitzler commented on what the Jays will have to do to continue their success, saying, “We are just taking it one game at a time. We have been focusing on doing what we do best, which is running the football and playing good defense. Not very many people thought we could accomplish what we have accomplished and we are all exited to go out and prove those people wrong each week.”

These young men are certainly up to the challenge, and there is sure to be more exciting football ahead for the soaring Blue Jays. 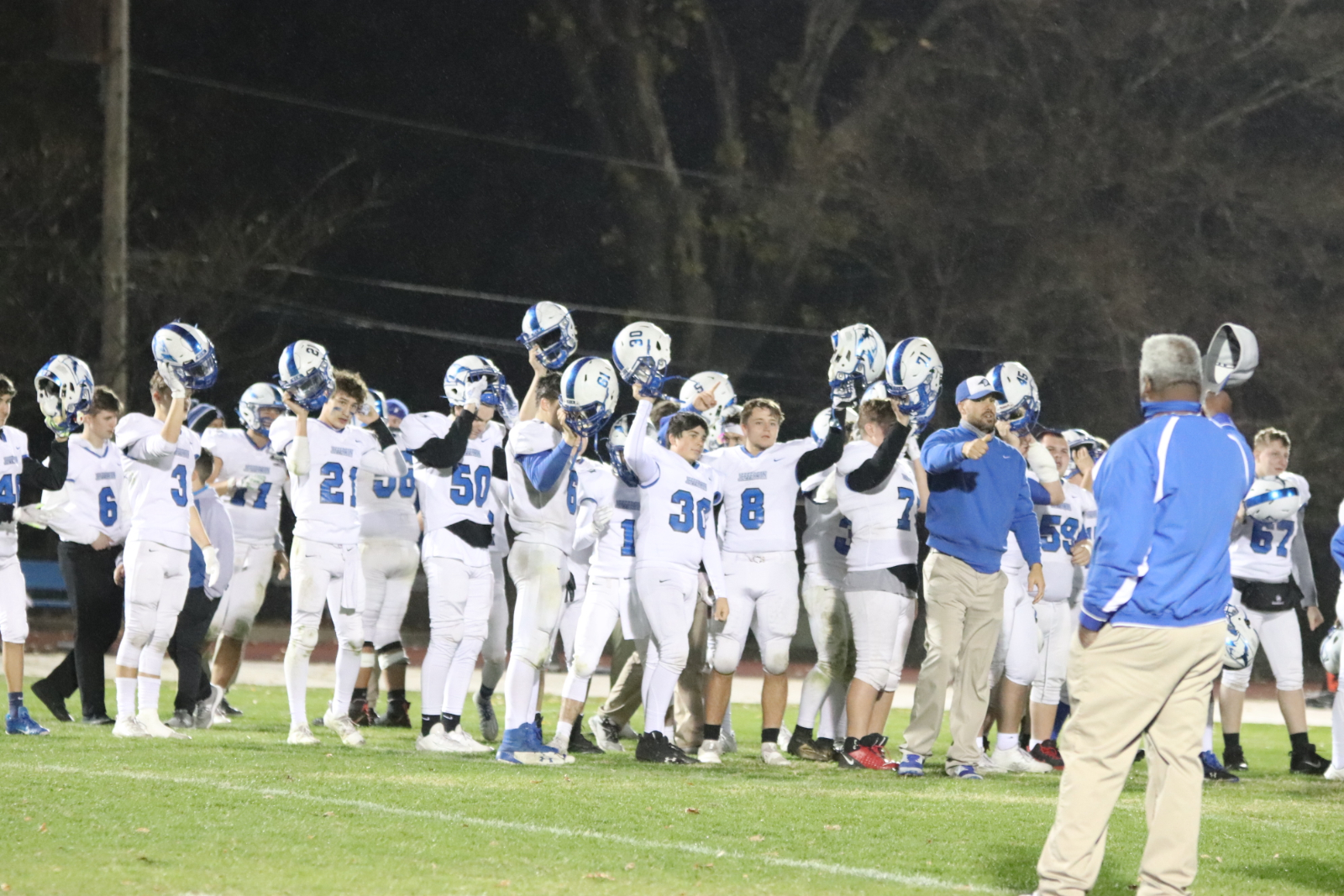