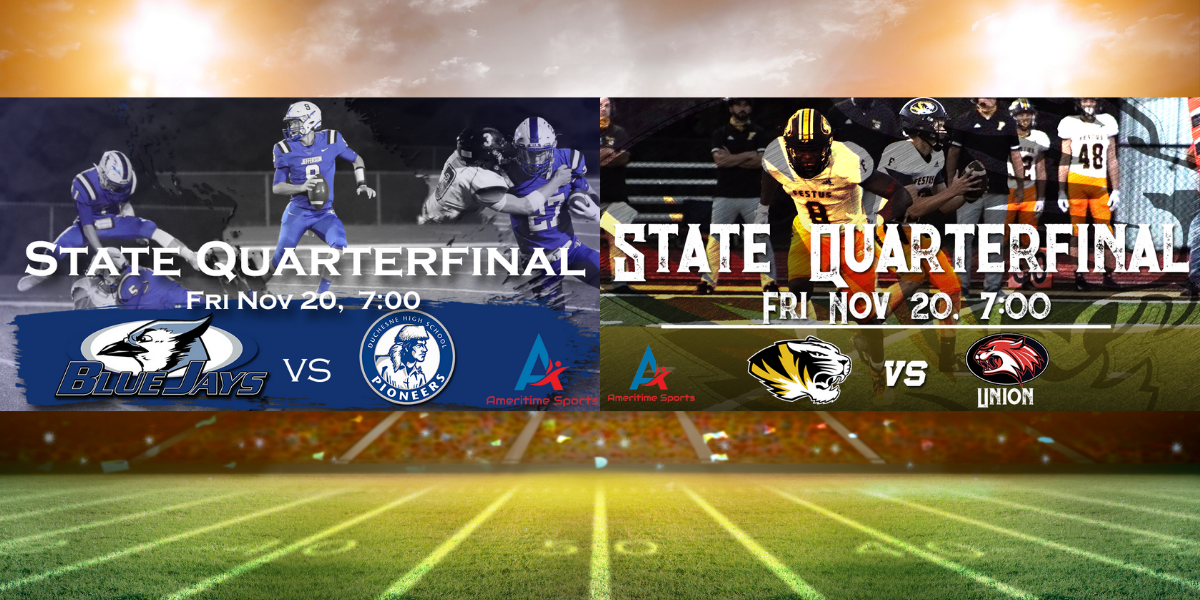 The Festus Tigers and Jefferson R7 Blue Jays look to build on their dominant District Championship victories on Friday in the State Quarterfinals. Both squads are red hot and looking to make school history with their first ever State Championships.

With the district playoffs in the rearview mirror, things have gotten increasingly more intense on the gridiron. The Missouri State Quarterfinals are upon us and the Festus area is right in the thick of things. Two of our featured squads still have lofty aspirations… and the air is ripe with optimism and potential drama. Buckle up. It’s time for Missouri State Championship Football.

First up we have the Festus Tigers, fresh off their dominant 27-6 victory over North County in the District 1 Class 4 Championship Game. The Tigers made mincemeat of the Raiders, but the path to winning State is likely not going to be a cakewalk. The team will have to continue their combination of dominant defense and timely offense if they want to advance to the semifinals.

That means Coach AJ Ofodile will have to lean on his big-time playmakers and get the most out of everyone else. To wit, the arm of All-Conference Offensive Player of the Year, Cole Rickermann, is going to be key. Rickermann is currently third in the entire area as far as passing with 2,183 yards and 29 TDs against just five interceptions. He will look to Collin Doyle (512 yards, six TDs), Kaian Roberts-Day (368 yards, seven TDs)  and Daylen Wagoner (391 yards, five TDs) through the air, and a finally healthy Cayden Glaze (226 yards, six TDs) on the ground.

Not to mention the receiving and defensive threats that also contribute to the ground game.  The fact that multi-faceted players like Cole Wagner (118 yards, three TDs), Dalten Yates (175 yards, three TDs) and Landen Yates (133 yards, one TD) can tote the rock successfully frees up Rickermann to air it out.  Or simply gives him an arsenal of quality options to make a litany of moves on unsuspecting defenses.

Defensive standouts Desmond Davis (All-Conference Defensive PotY, 64 tackles, four sacks), Eli Ortmann (66 tackles, two sacks) and Luke Shaver (58 tackles, one sack, three turnovers) will have to be on their game as well. The defense was critical for the Tigers throughout the District Playoffs, and they’ll need more of the same if they’re going to get past the Union Wildcats.

The 8-4 Wildcats won five straight playoff games in just two weeks to get here. This means one of two things. They’re either extremely tired… or extremely motivated, and have found another gear once the games “truly mattered”. They struggle outside of their home field though, going just 1-3 in away games this season, so the Tigers may have an edge there. Regardless, it’s going to be a battle on Friday night at 7pm.

Our other mouth-watering matchup features the District 1 Class 2 Champion Jefferson R7 Blue Jays, flying high after earning their first ever district crown last weekend. After dismantling the New Madrid County Central Eagles 42-20, the Jays and their supporters surely did plenty of celebrating the historic win, but you can bet they are laser-focused now on taking that next step. That starts with the State Championship Quarterfinals.

Headcoach Alex Rouggly’s squad is going to likely stick to the same game plan; run the football down the opposition’s throat and play smothering defense. Quarterback Drew Breeze (864 yards passing, 10 TDs) will be called upon to manage the offense and make the big play when necessary, but you can bet he will be feeding the ball to his trio of game-changing running backs. Dylan Schnitzler leads the team with 974 yards on the ground and 17 scores, while Will Schnitzler has racked up 683 yards and 10 scores of his own. And there is last week’s hero, Colby Ott (fresh off his championship five-TD game), who owns 632 yards and 11 touchdowns on the ground this season.

On the defensive side of the ball, look to Dawson Jakoubek, who leads the team in tackles (84), assisted tackles (39), total tackles (123) and sacks (four) to be the glue that holds the vaunted Jays defense together. He is not alone though. Mr. Everything, Colby Ott, has 49 total tackles, a sack and three picks on his resume this season, while Steve Stephens (53 total tackles, three sacks) and Will Schnitzler 25 tackles, four INT) are more than formidable themselves. This unit allowed just 27 total points through the district playoffs, but it will have to step it up even more to take on the Duchesne Pioneers.

The 9-1 Pioneers had a dominant season on both sides of the ball, and have managed to benefit from both blowouts and close games. Their season featured three shutouts and a triple-overtime winner, and their District Championship victory was a 16-13 squeaker over Lutheran High School of St. Peters. No telling which version will show up on Friday at 7pm, but you can bet the Blue Jays will be up to the challenge.

Both Festus clubs have been exceptional all year, and, while this 2020 season has been bizarre and filled with craziness and uncertainty… it has also been downright historic. Here’s hoping the best for our boys on Friday, and that there will be another Friday Night Preview next week to get hyped about.