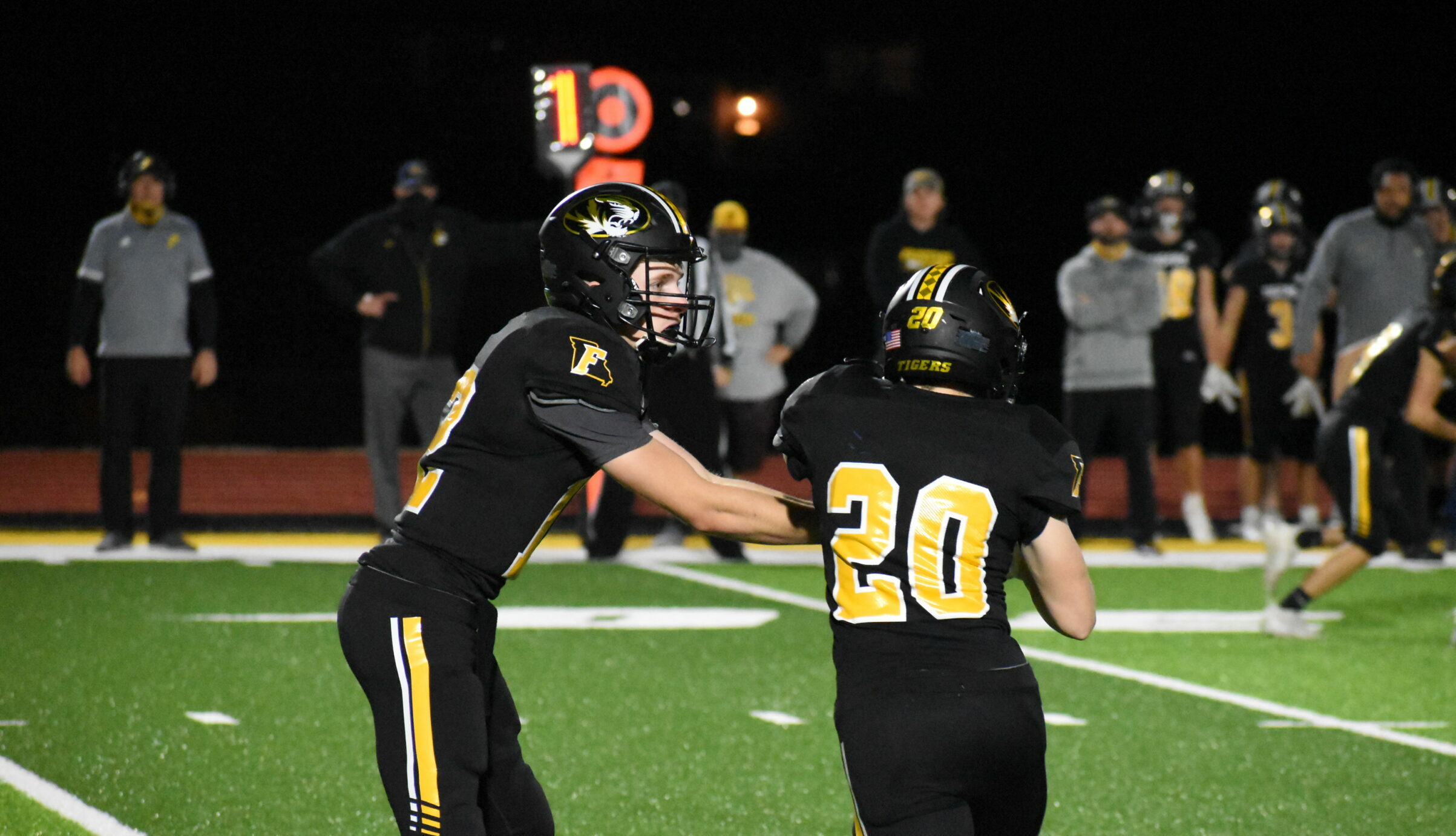 The Festus Tigers dismantle the North County Raiders on Friday to clinch their first District title in nearly a decade. The offense continues to roll as the defense holds firm heading into the state championships.

First year Head Coach AJ Ofodile, recently named as the conference’s coach of the year, has pushed all the right buttons this season, as his new-look Festus Tigers were crowned District Champions for the first time in nearly a decade on Friday night. The Tigers dismantled the North County Raiders 27-6 and are now headed to the State Championship Quarterfinals.

Coach Ofodile set lofty expectations this season when he stated, “For every season there are benchmarks that I always set. Beat your rival, have a winning record, win the conference, win the district, win the state. In terms of generating excitement and momentum towards building a program and culture, hitting as many of those benchmarks as possible is invaluable.”  These Tigers have yet to disappoint.

The game started off with a bang as Running Back Cayden Glaze ripped off a 77-yard TD run. Glaze broke through the pile before streaking down the sideline with a couple of nifty moves and blazing speed to find pay dirt. After the extra point the Tigers were up 7-0 and that was all they would need.

That didn’t stop Glaze from punching in his second TD, this time on an eight-yard run, in the second quarter. The bruising RB had himself a day, totaling 117 yards and those two scores on just 14 carries. His second touchdown put the Tigers up 14-0 after the PAT, and that score would close out the half.

Glaze quipped, “It felt great to get out there and make some plays. I have struggled all year with an injury, so to get out there healthy was great. The line did a great job of opening holes all night long. This win meant a lot for us, and we will celebrate this weekend, but come Monday its all business because we have our eyes set on our ultimate season goal.“

His coach had some high praise for him as well, saying, “It was great getting Cayden back at close to 100%. It’s exciting to see him have success because he is a really high character kid and its tough battling through injuries in your senior year, but he stayed the course and had his best performance when we needed it most.”

The third quarter was a defensive standoff, as neither team could find the endzone, but the final 15 minutes featured an onslaught of offense in comparison to the rest of the game. North County finally got on the board with a six-yard touchdown run, but the two-point conversion failed… and the Tigers could smell blood. They wouldn’t concede another point, and Quarterback Cole Rickermann decided it was time to put on a show of his own.

The Festus signal caller, who was named the All-Conference Offensive player of the year, hooked up with old reliable, Collin Doyel, for a pair of impressive touchdown strikes. The first was a play-action fake that saw Doyel burn a defender before hauling in an over the top 32-yard pass into the endzone. While the second was a 28-yard bullet for another score. A successful extra point and a failed two-point conversion cemented the scored at 27-6, ultimately giving Festus their first taste of district hardware since 2011.

Rickermann had this to say about his team’s performance, “It is a great feeling that is still surreal to me even two days later. It is awesome knowing I was part of a team that was able to accomplish so much. We are all equally as close off the field as on it. We all get along amazingly well and we all have a great sense of determination to want to win at any cost.”

Coach Ofodile’s defense was on display once again in this one as the Tigers have now held their opponents to just 13 total points in the playoffs. The defense forced three turnovers (two picks and a fumble recovery) and held the Raiders to just 159 total yards. They allowed just eight first downs and only let North County convert on two of their 13 third down tries.

Desmond Davis and Luke Shaver were once again key for the defensive unit as they totaled nine and seven tackles, respectively, to lead the team. Along with Luke Greenstreet (five tackles) they each had a sack in the game as well, and the entire defensive unit was outstanding to say the least.

Davis was named the All-Conference defensive player of the year and had this to say about his team’s efforts, “It feels really good to win a district championship, and…  I feel very confident we can make it to the final four if we win Monday-Friday including practice.”

Greenstreet was also beaming after the win.  “I can’t even put it into words man, everyone on this team works their tails off day in and day out. This group of guys we have is a brotherhood 1st and a football team 2nd. To win the district championship alongside my brothers, every positive emotion you can think of was running through our minds and bodies last night after that 4th quarter was over. But, the job isn’t done yet.”

On the offensive side of the ball the arm of Rickermann was yet again a force to be reckoned with, connecting on 9-of-11 passes for 188 yards and two scores. The aforementioned Doyel found the endzone twice (two catches for 60 yards), but it was Isaac Stucke who led the Tigers in the receiving department. He caught five passes for 110 yards and was by far the most active Wide Receiver in the game.

The Tigers couldn’t have been more dominant as they truly played a complete football game at both ends of the field. They will try to continue their dominance as they enter the State Championship playoff bracket. The next test on the schedule is against Union this weekend in a quarterfinal matchup, and the Tigers are already looking forward.

Coach Ofodile truly respects his players’ mindset, saying, “From a coaching perspective its exciting to hear the players echo the messages that you have tried to instill throughout the season. The fact that in the middle of celebrating a district championship they are conscious that there is still work to be done speaks to their maturity and commitment.”

The magic number to become District 1 Class 4 State Champs currently sits at three. If we’ve learned anything about these Tigers in 2020, they are certainly up to the challenge.