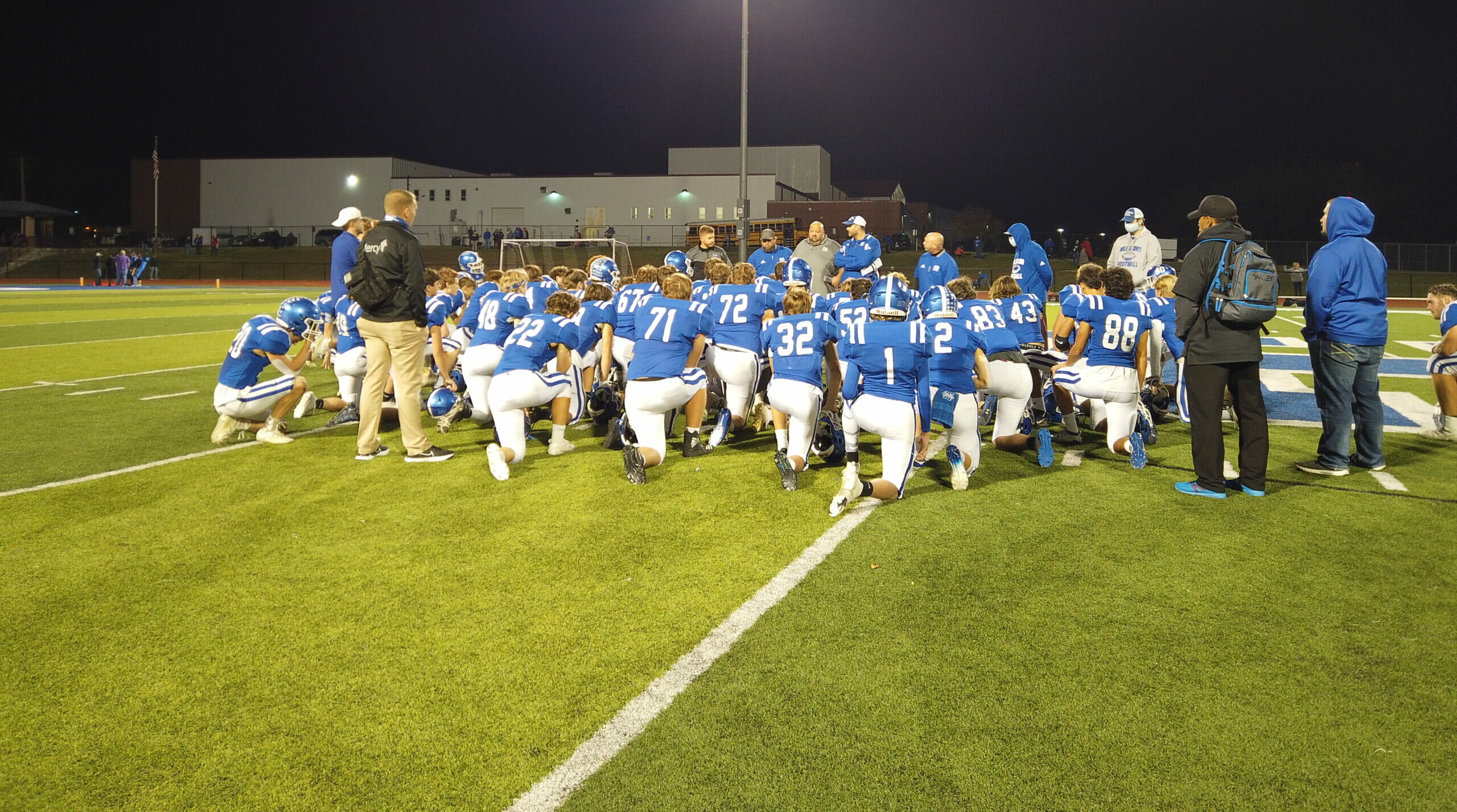 The Hawks season ends after a hard fought 36-28 loss to North County in the district semis.

The game was everything they expected. It was a battle from the opening kickoff. Unfortunately, for the Hillsboro Hawks, the fight ended with their opponents, the North County Raiders, ahead 36-28.

The scoring started early as North County got on the board first putting up a quick six at 10:50 of the opening quarter. Their two-point conversion failed.

At 7:56, Hillsboro answered back as Jaxin Patterson took a handoff 39 yards for a touchdown. Patterson then converted for two extra points to take an 8-6 lead. The big arm of Quarterback Griffin Ray was then unleashed at 2:17 when he connected with Austin Romaine on a 64-yard pass for a touchdown. Hillsboro failed to convert but after one quarter, the Hawks were up 14-6.

The second quarter saw more back-and-forth action, but North County finally scored with 2:41 left on the clock and converted for two more points ,tying the game 14-14.

Patterson for Hillsboro again answered, this time with a nine-yard touchdown run. Patterson tacked on the additional two making it a 22-14 game. However, with no time left on the clock, the Raiders returned fire and scored a touchdown off a 12-yard pass. They then converted for two more, tying the game 22-22 going into halftime.

Head Coach Bill Sucharski said that momentum shift hurt, and commented, “We had our chance to stop them late in the first half and get the ball to start the second half and build a two score lead, but they hit a touchdown pass as time expired giving them a lot of momentum heading into halftime. That momentum hurt and we just never got it all the way back in the second half.”

Not even a minute had gone by in the second half and Patterson had scored again for Hillsboro on a monstrous 60-yard run. The two-point conversion failed, but the Hawks were now leading 28-22. Then it was North County’s turn. With 5:53 left in the third, the Raiders ran one in from 25 yards out to tie the game. They also failed to convert so after three quarters, the game was tied 28-28.

It all came down to the fourth quarter. Spectacular defense was played by both teams. North County however, would finally break the tie and add a final rushing touchdown with only 4:42 left to go. North County also successfully added the two-point conversion. That was the final score of the game for either team, as Hillsboro was unable to respond, ending the game trailing 36-28.

Hillsboro’s offense was mostly a ground attack, with 37 rushes for 260 yards. Patterson led the way with 23 runs for 206 yards. Romaine was next with nine runs for 46 yards. In the air, Ray only threw five times, completing three for 73 yards. Romaine caught two of the passes for 68 yards. Sucharski commented, “The offense moved the ball well most of the night. Having a touchdown called off the board for an illegal forward pitch obviously hurt.”

Romaine was the workhorse of the defense making eight tackles and assisting on two others. John Bennett, Zach McNees, and Tyler Watson, all had four tackles each.

Sucharski believes the future is bright for Hillsboro, and said, “Next season we bring a lot back on O and D. All of our leading offensive yardage players return with most of them being only sophomores this year. I look forward to having a full off-season with the team this year and continuing to improve in all aspects of the game.”

Even in defeat, Patterson was complimentary of his team and his season, “A highlight from the game would be playing my last snap ever with the seniors that have taught me brotherhood the last two years of Varsity football.” The Hawks ended the season with a 5-5 record. 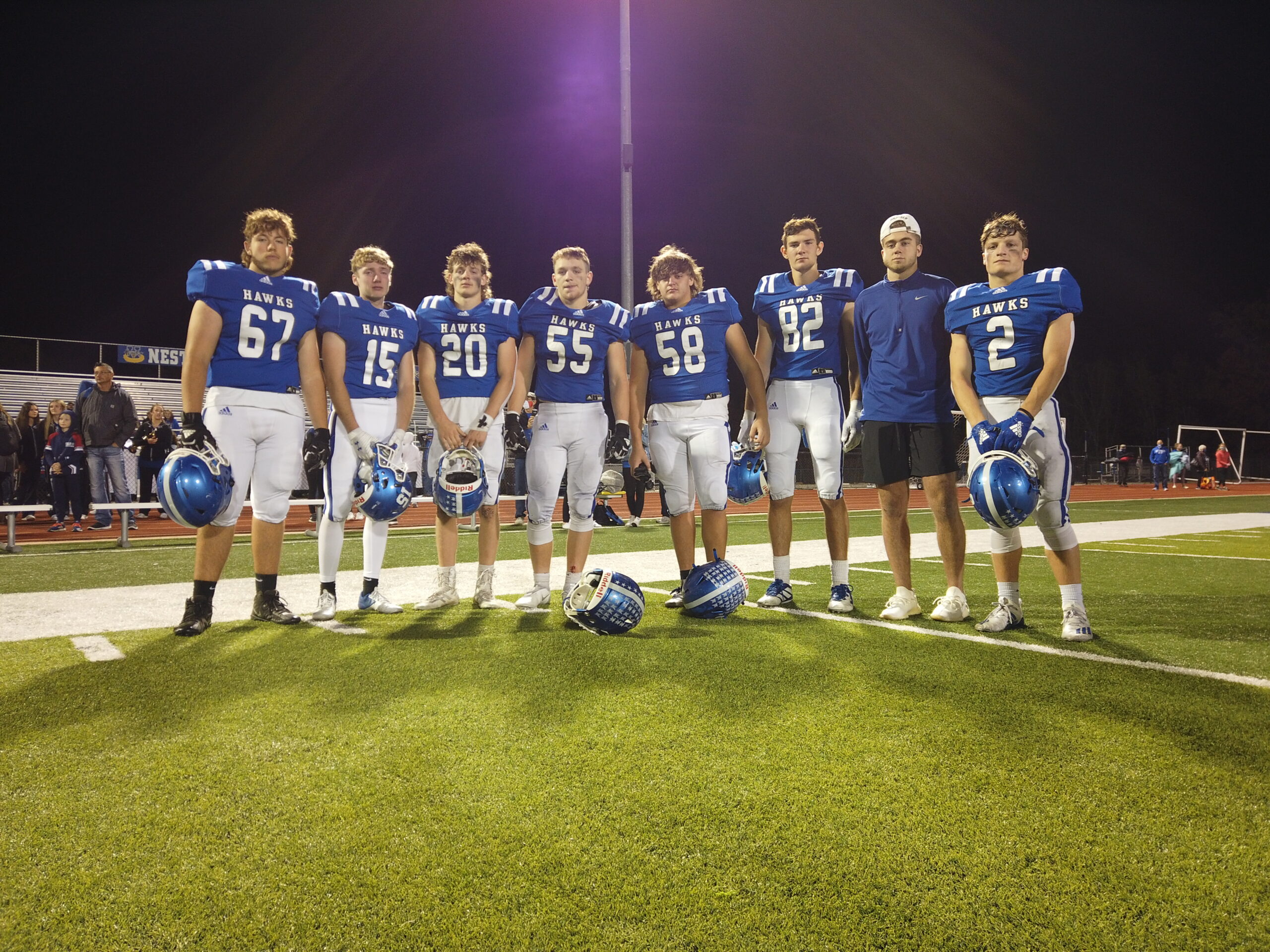