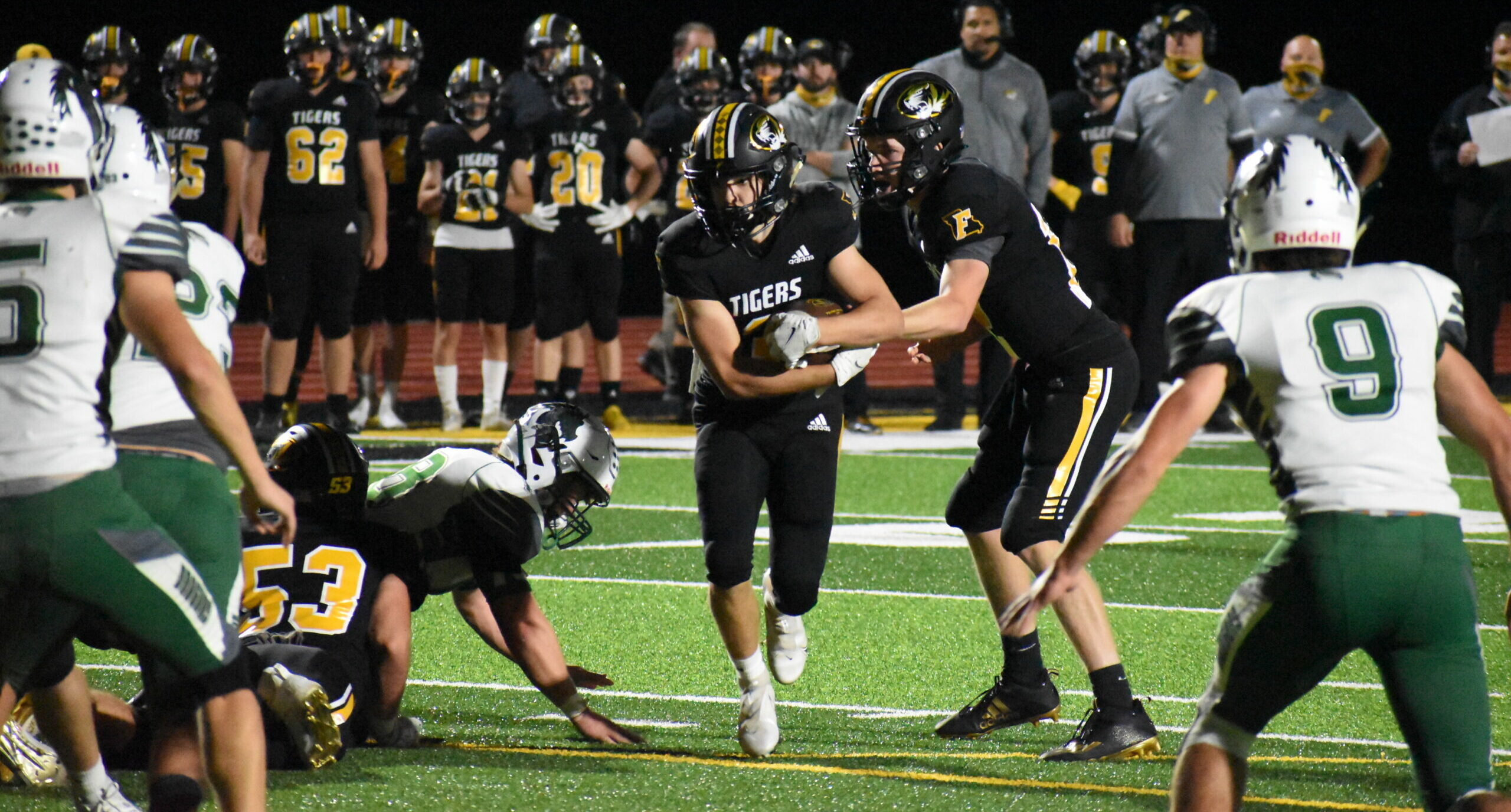 The Tigers cruise against the overmatched Dragons as they head to the district championship against North County.

The Festus Tigers made short work of the De Soto Dragons on Friday night, steamrolling their way to a 35-7 victory. The elimination win cemented their dominance thus far in the District 1 Class 4 playoffs, and catapulted the 9-1 Tigers into the finals against the North County Raiders.

The Dragons were outmatched going into this one, and it showed early. The first quarter started off with a bang for Festus as Landen Yates ran one in from four yards out. After the ensuing extra point from Jack Uskiwish, the Tigers found themselves up 7-0. That lead would quickly double as Cayden Glaze punched in another score, this time from the one yard line. After the PAT Festus was up 14-0 to close out the quarter. 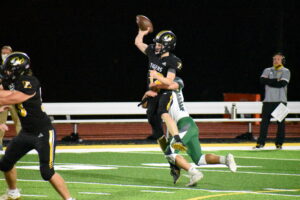 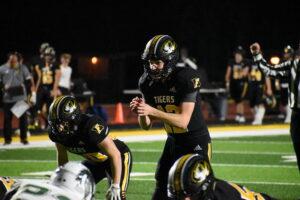 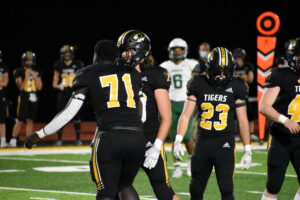 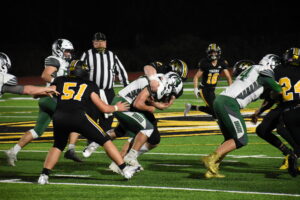 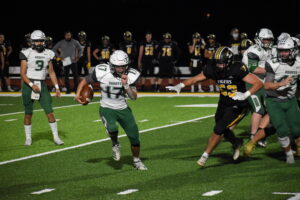 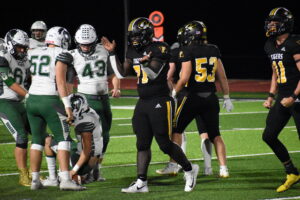 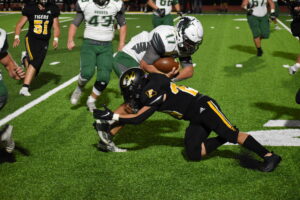 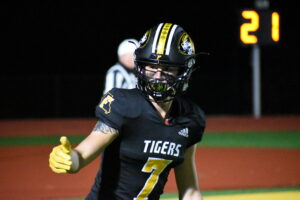 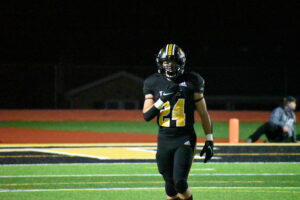 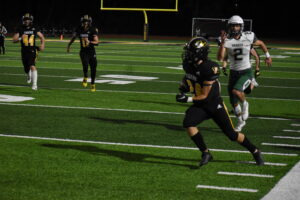 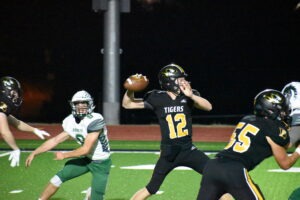 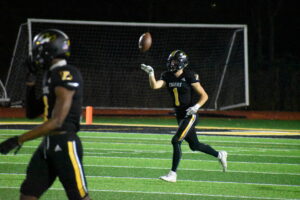 The defense held fast in the first and came back with more of the same in the second. They blanked the Dragons again, making life easy for Quarterback Cole Rickermann and his offense. The uber-talented signal caller got in on the fun in quarter number two, hooking up with receiver Isaac Stucke for a 59-yard strike, resulting in a TD and a 21-0 lead. This was all the Tigers would need as they cruised through the first half.

Stucke had this to say about his team’s effort and his confidence in his talented QB, “I think that fixable mistakes were made throughout the game, but we have a great coaching staff that guides us through the game and fixes the mistakes along the way. At the end of the day we did come out with the win and I believe that’s due to the tough mentality of our team. Having Cole as my quarterback helps out a ton. I wouldn’t want any other QB leading me and my teammates during the game. He has a very high football IQ and performs well under pressure.”

The Dragons came out with a little fire after halftime and finally got on the board with a 22-yard TD, but that just poked the bear. Sitting comfortably with a 21-7 lead, the Tigers didn’t let off the gas as they tacked on two more scores. A second Glaze TD, this time from four yards out, and a 27-yard connection from Rickermann to Collin Doyel made the score 35-7. And that was all she wrote.

The defense blanked the Dragons the rest of the way and held them to just 157 total yards and only nine first downs. Desmond Davis led the way with nine tackles (five for a loss) and a sack. Next in line was Eli Ortmann, who had six of his own with two for a loss, two assists and a sack. Dalten Yates added five tackles and snagged an interception, which was the only turnover in the game.

Offensively, the Tigers racked up 406 total yards with 15 first downs, zero turnovers and 55% efficiency on third down tries. Once again the firepower ran through Rickermann and his arm. The Tiger QB was 10-19 for 225 yards and two scores, and he added 27 yards on the ground for good measure.

When asked about how his team handled themselves and what to do to prepare for next week, Rickerman said, “I thought the team played well. We were able to execute well enough to get a win. We need to have a good week of practice and stay focused all of the way up until Friday to succeed.”

Glaze led the way in the rushing department with 64 yards on 13 totes and found the endzone twice. Stucke owned receiving honors with his 86 yards and a score, but the offense was humming all game. They chewed up the clock, gained yardage in big chunks and kept a tired Dragons defense on the field much longer than they wanted. A well-oiled machine to say the least.

When asked about the big win, defensive presence Luke Shaver pumped the breaks a bit, saying, “Well it’s a start to win that first game, but we’re not hyped about it. We need to focus and dial it back up for this week, and hopefully bring another dominant performance.”

The Tigers will try to keep the motor running next week as they have a season rematch with North County for all the district marbles. Kickoff is at 7pm on Friday night in Festus, and the winner will be crowned District Champion. A shot at the state title is one the line, so you can bet these two powerhouses are going to lay it all out there. 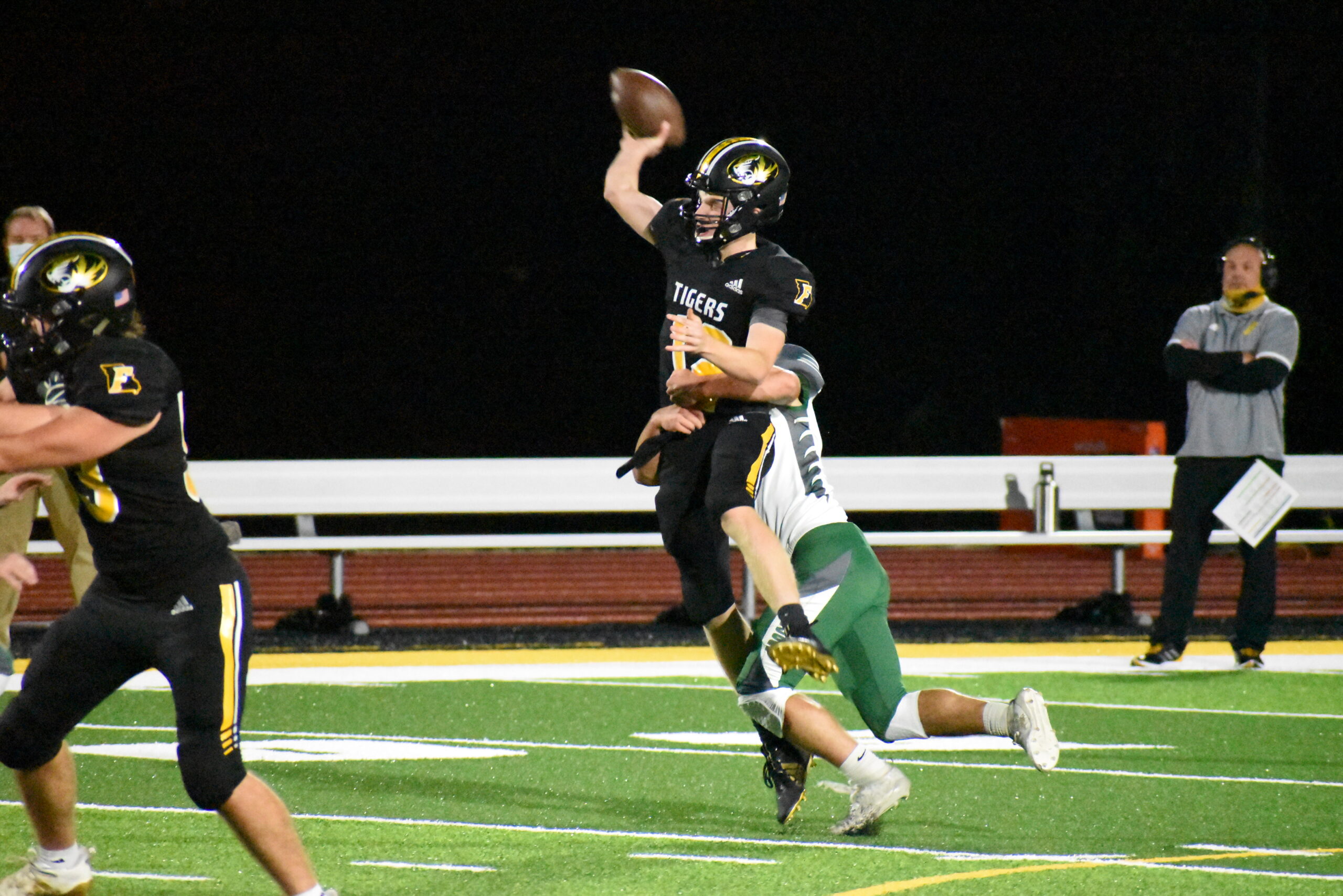