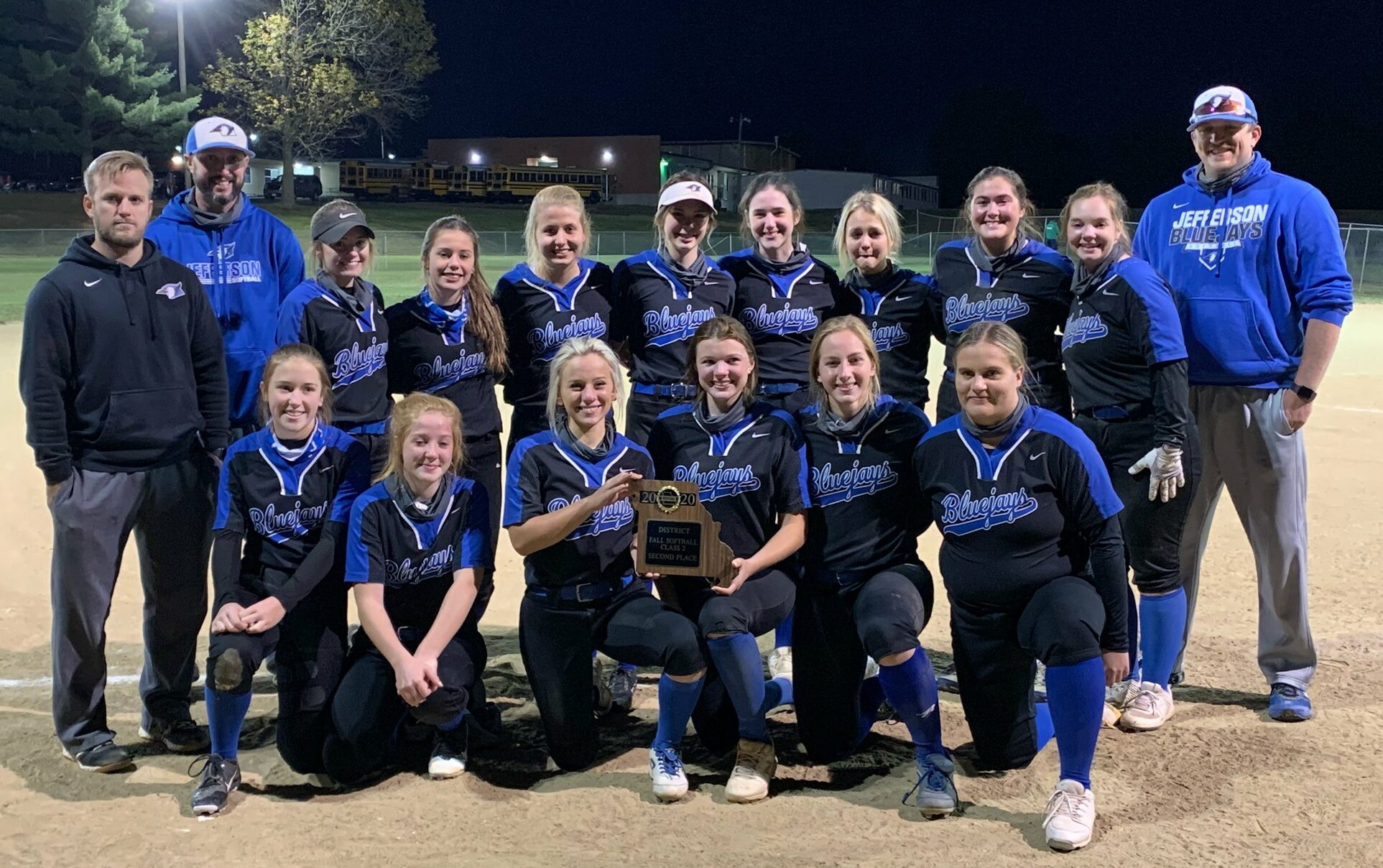 Friday night, the Jefferson Blue Jays battled the Elsberry Indians for a chance to advance to the Class Two State Tournament. Despite a late comeback the fell 12-8, taking Second Place.

Friday night, the Jefferson Blue Jays (8-13) took on the Elsberry Indians (13-10) for a chance at advancing to the Class Two State Tournament. Jefferson fell behind early, and despite a late comeback attempt, couldn’t quite pull off the win, losing 12-8. The Jays Softball team was able to finish the district tournament in second place.

The Blue Jays entered the game Friday night, coming off back-to-back wins in the district playoffs to get them to the finals. Elsberry, as the number one seed of the district tournament, only had one game prior to the finals, beating New Haven 15-5.

Representing the Blue Jays on the mound was senior Megan Payne, who was coming off a gem of a pitching performance against St. Pius X. On Wednesday night, Payne went seven innings against the Lancers giving up just five hits and one earned run. On the season, Payne had a team-best 3.83 ERA over 56 2/3 innings pitched.

Jefferson started the game on the right foot, with Maggie Brunke reaching on an error and Morgan Figliolo following that up with a single. Cami Menke then brought both of them home on a single to make the score 2-0.

The Indians were quick to respond in the bottom half of the first inning. Payne surrendered a solo home run and a triple, which gave a 3-2 lead to the Indians.

In the bottom of the second inning, the Indians continued to pile on the runs and extend their lead. Elsberry got two runners on early thanks to a single and a walk, who came around to score on an error by Figliolo and an RBI single, giving the Indians a 6-2 lead.

Jefferson struck back in the top of the third when Menke singled to drive home Catryn Cattoor, making the score 6-3. But the Indians kept the scoring coming in the bottom of the third, hanging four more runs on the Blue Jays and extending their lead to 10-3.

In the top of the fourth, Allison Campbell doubled for Jefferson to bring home Chloe Vaughn and make the score 10-4, but couldn’t capitalize further in the rest of the fourth or fifth innings.

The Blue Jays began to climb back into the game in the top of the sixth inning. They were able to load the bases thanks to three walks. This brought Brunke to the plate, and she came up big, doubling with two strikes in the count to score two runs and bring the game to within four runs. Sadly the rally was short-lived, as the Indians put two more runs on the board to make the score 12-6 heading into the final inning.

Despite trailing by six, the Blue Jays weren’t going out without a fight. They started the inning with a pair of singles from Menke and Brittany Bittick, and then Vaughn was hit by a pitch to load the bases. With the sacks full, the Blue Jays recorded two consecutive outs bringing Campbell to the plate. Campbell walked, which left the bases loaded while scoring Menke. Brunke then followed that with another walk to make the score 12-8. With two outs and the bases loaded and a chance to tie it with a swing of the bat, Figliolo hit a sharp line drive, but right at the center fielder to record the game’s final out.

With the 12-8 loss, the Blue Jays season has officially come to an end, posting a record of 8-14 and coming just a few runs short of making the state tournament.

Menke was the Blue Jays bright spot on offense Friday night, going 3-4 with three RBIs and a run scored. She now ends the season with a batting average of .468 with 30 RBIs, five home runs and 29 total hits.

Allison Campbell also had a productive night for the Jays, going 1-2 with two RBIs, two walks and a double. Campbell ends her season with an average of .173 and an on-base percentage of .317, but had a strong postseason hitting .375 during the district playoffs.

Figliolo and Vaughn also were productive at the plate, with Figliolo going 1-5 with a double and a run scored while Vaughn went 1-1 with two walks, two runs and a hit by pitch.

Congrats to the Blue Jays on a great season and a terrific playoff run.