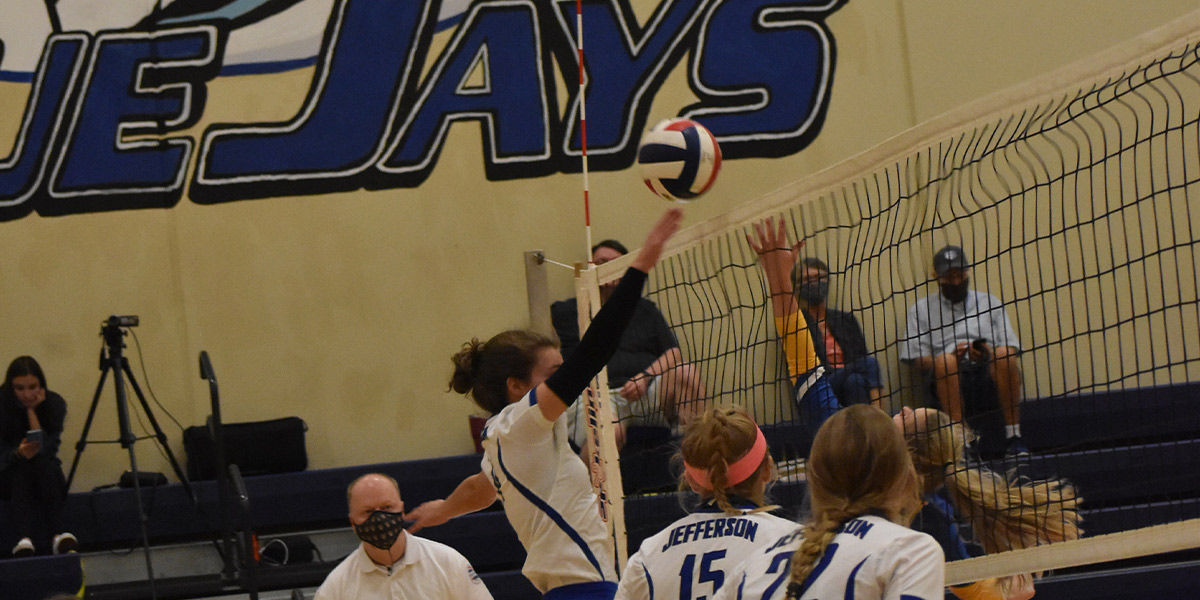 Jefferson couldn’t keep their strong season going Tuesday night when they ran up against the St. Pius X Lancers, getting swept 3-0.

The Jefferson Blue Jays (8-4) looked to continue their strong season thus far Tuesday night when they took to the road to face the St. Pius X Lancers (12-5-3). The Blue Jays, however, couldn’t keep up with the Lancers, getting swept 3-0.

Jefferson had their hands full Tuesday night with the Lancers, a team that head coach Tara Fish said was “a tough game every year.”

The Blue Jays started the game off on the back foot, struggling to keep up with St. Pius, losing the first set 25-15. The second set was more of the same for Jefferson, as the Lancers again dominated to win 25-15. The Blue Jays finally found their momentum in the third set, but it was too little too late as they suffered a tight 25-23 loss, falling 3-0 loss on the night.

Fish said after the game that the team defense was to blame for the poor performance.

“Our defense overall as a team was off, which didn’t allow for our offense to set up as well as we would have liked,” Fish said. “We know that we learn and grow from our mistakes, which is a good thing.”

Siebert said that the Blue Jays “weren’t themselves.” Tuesday night.

“Our passing was off along with most of our hitters,” Siebert said. “We just couldn’t find a way to put the ball away.”

Another player who kept the Blue Jays competitive was sophomore Kirstyn Lloyd. Lloyd tied the team lead for kills with six while also recording eight assists, 14 serve receptions and two blocks (one solo and one assisted.)

Ava Roth also provided positive contributions for the Blue Jays. Roth led the team in both digs, with 17, and serve receptions with 17.

While the result wasn’t what Fish and the Blue Jays were looking for, she remained positive after the game.

“Although we lost and didn’t play to our potential, we reached most of the goals that we set for ourselves before the game,” Fish said. “Which, in turn, changed our mindset and is allowing for more growth and higher expectations from ourselves right off of the bat.”

Jefferson only has four games remaining this season and will go again Monday night against the Hillsboro Hawks.