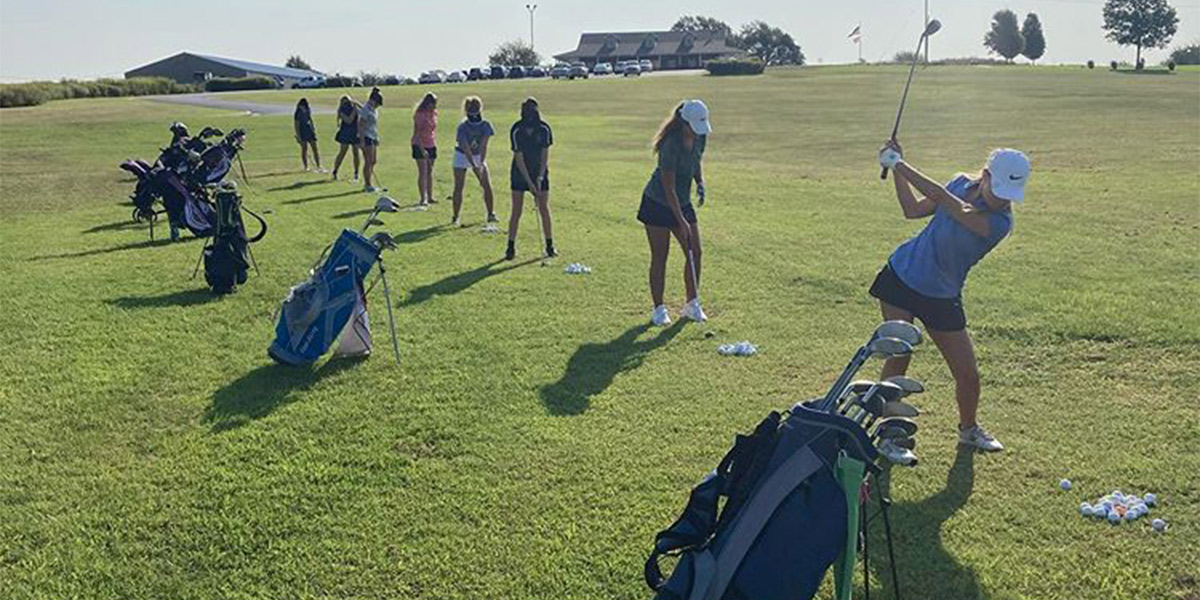 Senior night proves to be a great ending to the season

It was an excellent showing for the Ste. Genevieve Dragons on Senior night at home on cthe Ste. Genevieve Golf Course. On 10/7, the Dragons set a new school record for best team score, 189, in their win against the Farmington Knights. Head Coach Rachel McDaniel commented, “It was a fantastic senior night. We played the back nine for the two days leading up to today to prepare ourselves for a good run at the school record. We had come close earlier in the season and we really felt like the record was tangible.”

Ste. Genevieve medalist Lani Yamnitz led both schools with her outstanding score of 46. “Yamnitz had a breakout round. Every time I saw her and peeked at her score card, things seemed to be going well. I’m excited to see what Lani can bring to the team for the post season,” said McDaniel.

Lamnitz commented on her team’s success, “Yesterday was a really good day all around for everyone. Beating the Varsity team score alone was exciting. To be a part of that and getting the best score was something truly rewarding. Being able to shoot like I did yesterday was very encouraging to me and just makes me want to push myself even harder!”

Just off the lead was Boston Williams who shot a 47. McDaniels noted, “Williams also had a fantastic round. She was striking the ball well off the tee and in the fairway, her short game was working for her, her mental game was tough. It was probably the most fun I’ve seen Boston have on the golf course. She’s another one that I look to do big things in the post season.”

Brooke Turner shot well and came in with a 48. McDaniel said, “Turner eagled her first hole of the day, the par five eleventh. She holed out from about 100 yards and that just set her round in motion. I’m hoping Brooke will make a good run at districts. She’s definitely due.”

Etta Heller matched Turner also shooting a 48. McDaniel commented, “Heller was 6 inches short of a hole-in-one on the par three, tenth hole. Etta has been our leading ball striker from day one. She just makes unbelievable contact with the ball. Her short game is catching up and it’s been a joy to watch her excel.” Heller noted, “I am so proud of my team and so thankful that we were given the chance to have a season with this whole Covid-19 stuff. It makes me want to do more and accomplish more.”

Addie Taylor had a great outing too, shooting a 50. “Taylor keeps dancing around breaking 50. She is just so close! Addie had another good round and her short game was on fire! I expect big things from her at districts this year,” McDaniel’s said.

Regean Naeger turned in a score card of 54. McDaniel commented, “Naeger had a tough week, but put it aside to have a great round of golf. She was relaxed, she was laughing, and she was enjoying the game. That’s what I like to see.”

On the JV side, Maggie Myracle had an excellent outing, shooting a 52. “Myracle had a great round to end her season on the JV side. I’m looking for her senior season to be her best yet,” said McDaniel.

Also in JV results was Mia Schweigert who shot a 60, as well as Sydney Eisenbeis and Ava Meyer who came in next each with a 61. “Schweigert and Ava Meyer both had great rounds today. I know they weren’t satisfied and I’m glad for that. It gives us something to build on for next year. I’m hoping these two will step up next year as juniors and be forces on this team,” McDaniel mentioned.

Madison Vaeth had a nice showing as well with a 63. McDaniel went on to say, “Vaeth and Eisenbeis also finished strong for the season. Both improved dramatically from the beginning of the season until now. Sydney worked hard at practice to better her game and it paid dividends for her all season. We will miss these two next year.”