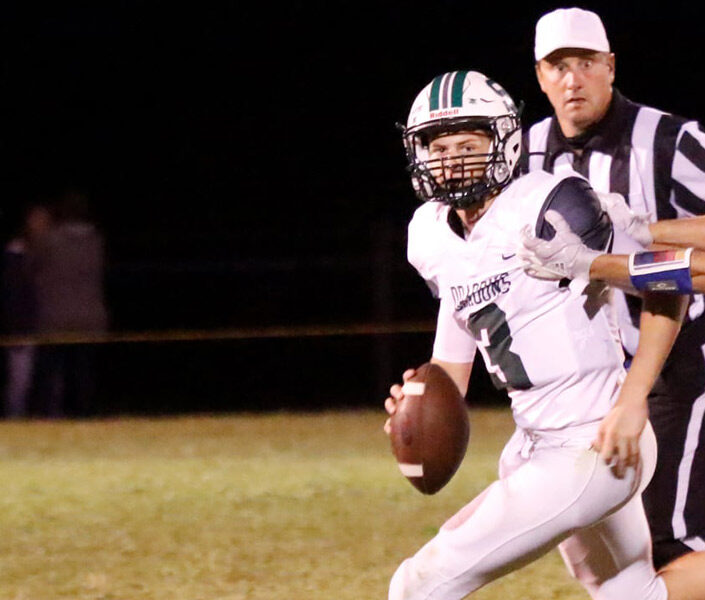 Vying for their third straight win on Friday night, the Ste. Genevieve Dragons came up just short as they fell 31-26 to the Central Rebels of Park Hills. The Rebs are currently sitting atop the conference at 6-0, so that speaks to the effort that the Dragons put forth.

Senior runningback Kaden Flye felt the same way. “I feel like we all played our best on the field Friday night. I think we all did everything right, our defense and offense were all doing their jobs.”

The game started off with a bang in the Dragons’ favor with stalwart QB Aiden Boyer breaking loose for a 77-yard TD run to give Ste. Gen an early lead. Central followed up with a score to answer, but the Dragons came roaring back in the second quarter with Payton Matthews catching a rare pass from Flye to make it 13-7. That concluded the scoring for the first half as both defenses held firm.

The third quarter however opened the floodgates for the Rebels as they dropped big play after big play on the Dragons. A 55-yd run, 82-yd pass and a pick-six at the 25 yd line ramped the score to 28-13. After a Central field goal made it 31-13, the Dragons got back to work.

The defense held and Boyer tossed a 66-yd bomb to Matthews, before the former ran in his second TD of the day from five yards out. Unfortunately the two-point conversion failed and the fourth quarter was a clean sheet on both sides. The score sat at 31-26 and went into the books as such.

Boyer, once again the offensive star, was 11 of 24 for 209 yards through the air with a TD and two picks, but also led the rushing attack as well totaling 141 yards and two scores on just 11 totes. He had this to say about the game, “It was a big conference game for us and we new it was gonna be a dog fight ’til the end. A couple mistakes offensively and defensively cost us. I threw a pick-6 when they were starting to get some momentum and we gave up a touchdown on 3rd and 20 from our 25. But we’re definitely getting better every week and we’re starting to become a really good football team.”

Matthews, who caught three passes for a ridiculous 135 yards and two TDs, followed up with, “We played a good game Friday. Although we didn’t get the win, I was happy with everyone’s performance. There were little mistakes here and there that cost us the game (and) we had some very good drives on the offensive side. Going into next week, I think we need to finish drives on offense, and work on zone coverage on defense.”

Defensive rock Bret Bieser, who had six tackles in the game, said, “I think we played a great game but there is still a lot of work to be done, and always room for improvement.”

That sentiment rings true as the Dragons gear up for next week as they travel to take on 3-2 Perryville in an important conference showdown.