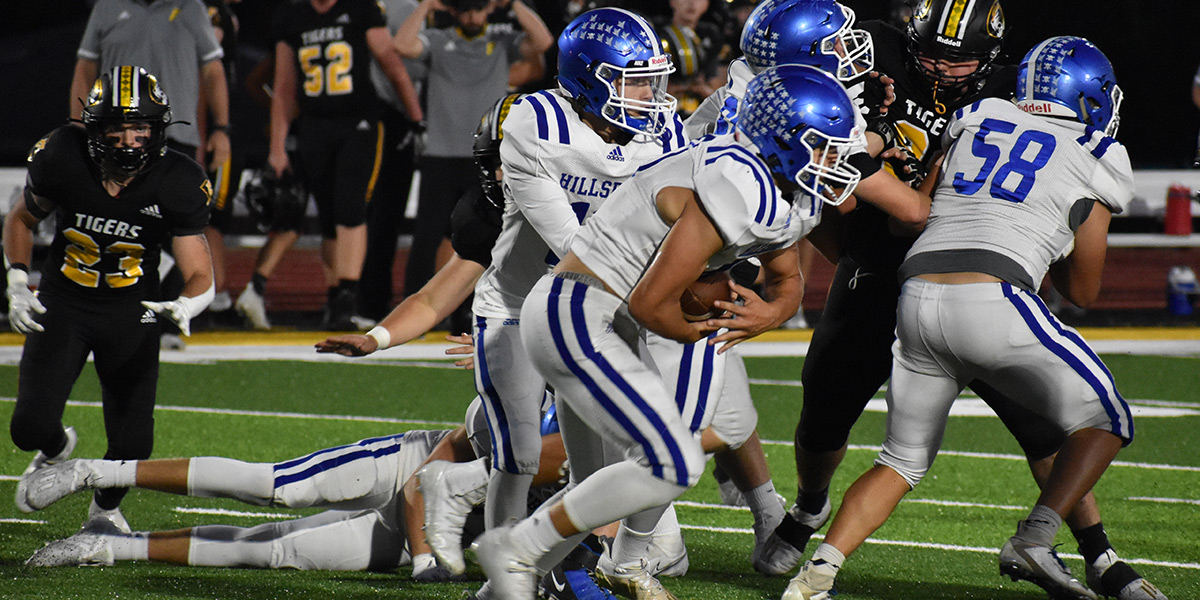 The Hillsboro Hawks fell to the Festus Tigers for the first time in nearly a decade on Friday night 41-26. In the heated rivalry, which had seen them take the last seven meetings in a row, they just didn’t have an answer in this one.

The Hillsboro Hawks fell to the Festus Tigers for the first time in nearly a decade on Friday night 41-26. In the heated rivalry, which had seen them take the last seven meetings in a row, they just didn’t have an answer in this one.

When asked how the game went Head Coach Bill Sucharski was brief in his response, “We played well at times, but just made too many mistakes.  Hats off to Festus for coming up with some big plays.” While Coach Sucharski isn’t sugar-coating it here, that doesn’t mean that there aren’t some solid takeaways from this game. 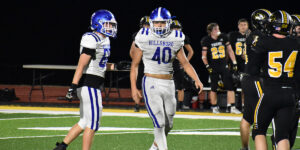 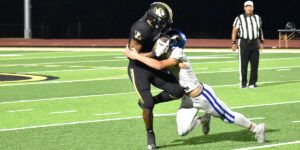 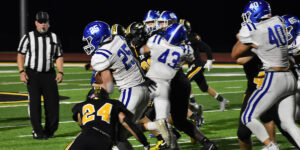 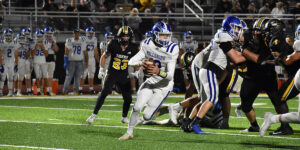 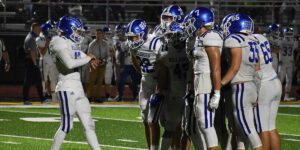 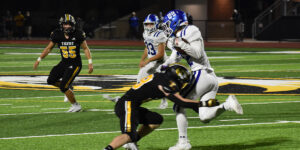 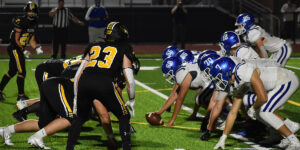 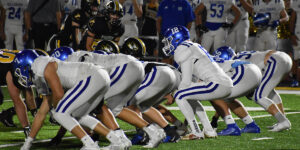 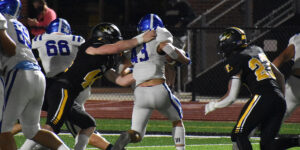 It’s tough to lose, let alone to a rival, but the Hawks have a lot they can hang their hat on here. Austin Romaine was an absolute beast putting up a hat trick by leading the team in rushing yards, receiving yards and tackles. When asked about his performance on both sides of the ball and how the team should rebound he was blunt. “I think the key to getting things back on track for the next week is to get into practice and stay focused all week and just move forward week by week.” Despite his candor he was the star for Hillsboro, accounting for three of the four Hawks TDs and a two-point conversion. 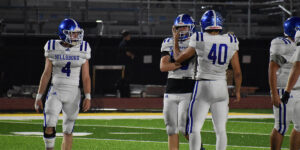 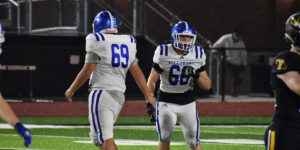 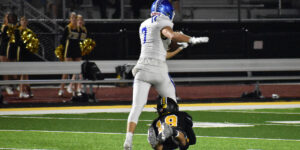 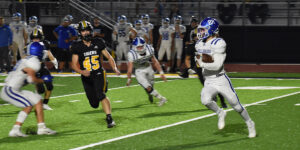 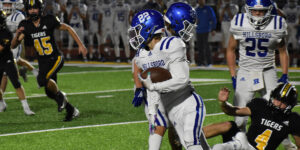 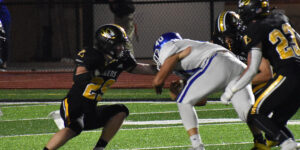 The Hawks were down 20-6 after a big first quarter by the Tigers, but they hung in tight, trading TDs back and forth throughout the second half. They just never found the path to pull away to victory. Despite the final score they were only out-gained by seven total yards and out-rushed the Tigers by 118 yards (328-210). But they couldn’t find the endzone through the air.

Despite that fact, Quarterback Griffin Ray was 7-of-18 for 144 yards (zero TDs and a pick), for the most Hawks passing yards in a game this season. When asked about his biggest night this year throwing the ball against a very stingy secondary he had this to say, “This week we took a loss against a good team but we can and will beat them and I believe they weren’t ready for us to throw like we did and that’s why we had success doing it. We gotta clean a few things up and we will win that game. Overall I feel like our effort was there but the technique wasn’t. It’s all a part of the game and we are now on a mission.”

His coach also had some things to say about the passing game.  Sucharski stated, “First off I think Griffin played a really good game for us and has continued to progress and get better each week. Sometimes we don’t rely on him to throw the ball as much because we have talented kids in the backfield that get most of the focus. However, we as a program, players and coaches have worked hard to improve our passing game and I am happy with the progress we have made in that area.”

When asked about the effort on the other side of the ball and giving up some tough plays, defensive stalwart Zach McNees had this to say about the key takeaways in the game against Festus. “(They are) a really good team. They capitalized off our mistakes and had a solid game plan coming into the game. I know my team could have played better and if we clean up some of our mistakes the scoreboard would look a lot different. I’m proud of us never giving up and playing until the final whistle. I guarantee we will be more prepared to beat the tigers when week 13 rolls around.

It’s always a heart-breaker to drop a rivalry game, but these Hawks are a talented bunch and they will have all the motivation they need to right the ship this week against Windsor in another conference showdown. 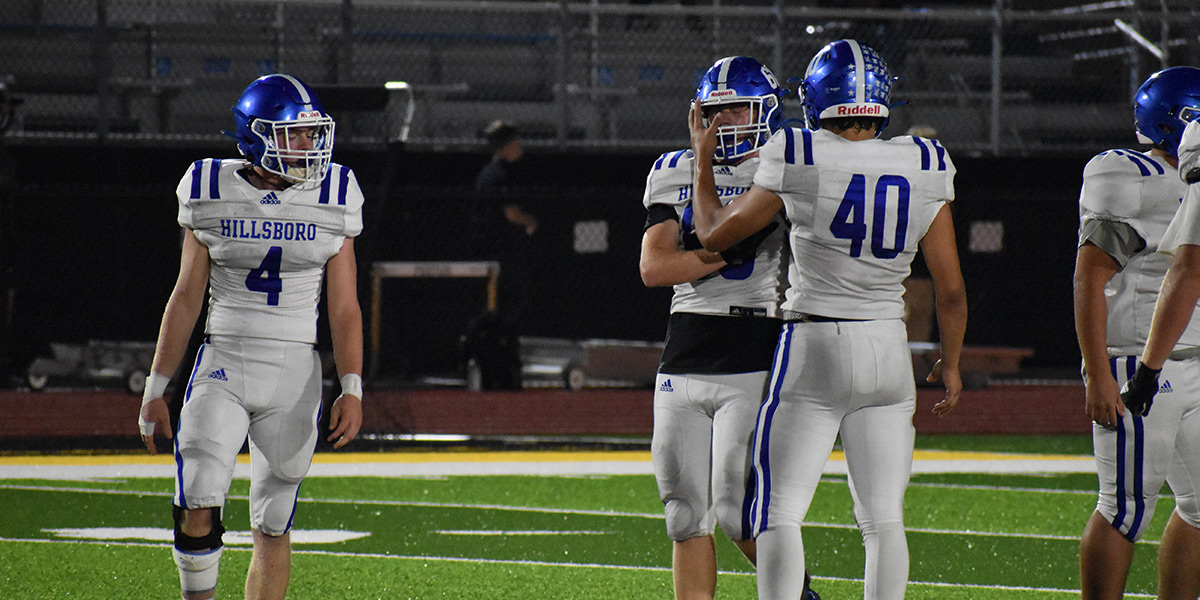