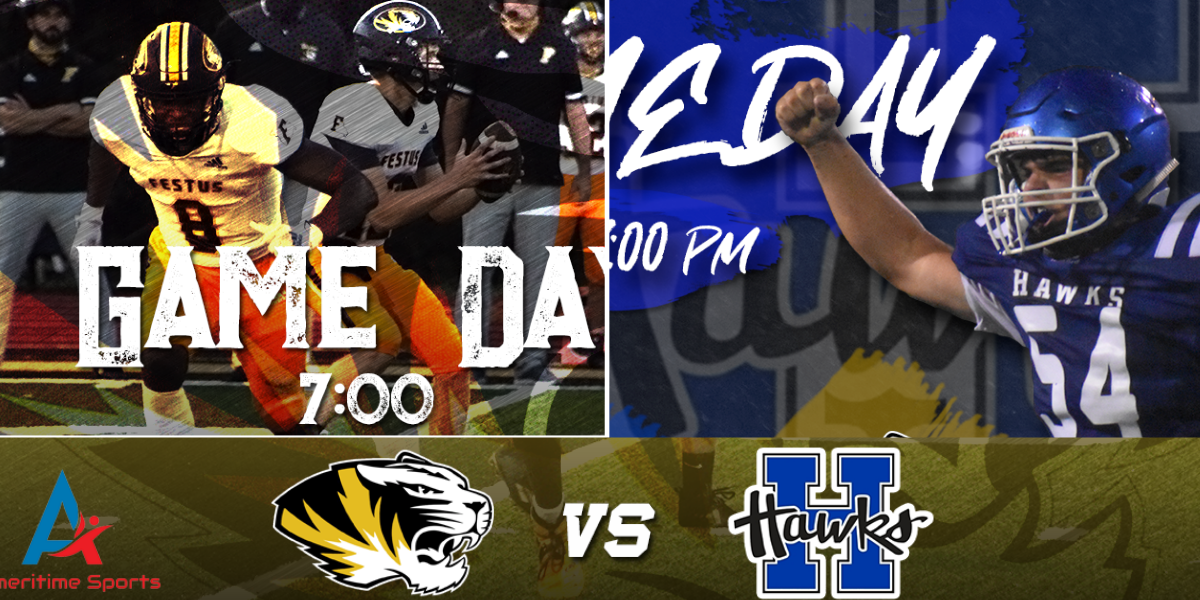 The History of the Storied Rivalry Between the Hillsboro Hawks and Festus Tigers.

A true rivalry may be the purest form of competition in the world of sports. Whether it is “friendly” like the Cardinals and Cubs or hated like Michigan and Ohio State, there is a an extra dose of passion, grit and vitriol pumped into each game like a shot of adrenaline. In this neck of the woods, one such storied campaign, fueled by history and tension, is the yearly showdown between the Festus Tigers and the Hillsboro Hawks.

This Friday it is renewed once again. The 4-0 Tigers take on the 2-2 Hawks (who have won the last seven meetings), but Festus has the luxury of playing on their home turf in 2020. Both teams have been impressive this season, but as is true with virtually every rivalry game, records go out the window when you’re preparing for war against a bitter adversary.

Obviously geography and community play a large role in the creation of a rivalry. Fittingly, it’s a trait ingrained in competitive humans to try harder against those with a long history in close proximity. But how did this rivalry begin? There is no concrete timeline. However, Festus alum Dave Abrams has a theory that it dates back to the late 1960s. “In 1969 we were playing Hillsboro in basketball. It was a pretty heated game from what I have been told. My dad came down with a rebound and caught the coaches son under the chin with an elbow and dropped him. The coach ran out on the floor and said ,’Look what they did to my son!!’  The benches and stands cleared, and that was the Festus/Hillsboro riot.”

After doing some digging and reaching out to various people trying to confirm this legend, we tracked down someone who would have first hand, or “elbow”, knowledge of this event, Mark Steighorst.

As it turns out, Mark’s dad was Gene Steighorst, Legendary Head Coach of the Hillsboro basketball team and he was the “kid” who caught the blow heard ‘round the county.

As Mark recalls, “It was either ’69 or ’70 and Festus had come to Hillsboro for the game. It was a battle on the court the whole game and we were down by 5 with about 30 seconds left when my dad called for a press. Festus came down with a rebound and Mike Abrams got me with an elbow. I was bleeding all over the place, the benches cleared and the stands went nuts. The Sherriff was actually at the game and he was out on the court trying to separate people. The refs actually called the game before it was over and we ended up losing.”

Steighorst continued, “Back then we played everyone twice, so we headed to Festus for the next game. I believe the courts were roped off, there were police by the doors and stands and it was basically locked down. I guess it’s been a rivalry ever since.”

Whether that is considered gospel by both sides is up for debate, but what we do know is players and fans tend to dial up the intensity to 11 in these situations.

But let’s keep in mind, coaches and administrators are not immune to the tantalizing effects a rivalry game elicits. Hillsboro Head Coach and alumnus (Class of ’96) Bill Sucharski has a long history with these showdowns vs Festus, and he had this to say about Friday’s contest. “This is obviously a big game every year between the two programs.  A lot of years this game has determined who wins the Conference so it is obviously a big game for both schools.  I know the communities of both schools look forward to this game and this game always means a little more than some of the others.  I know our kids are looking forward to the opportunity to play and we are looking forward to Friday night.”

The scenario on the other side of the field is the epitome of a polar opposite, as new Tigers Head Coach A.J. Ofidile will be experiencing the intensity of the rivalry for the first time. When asked if he had gotten a sense of what the rivalry means to everyone involved, he responded  “You can definitely tell how important the rivalry is to the kids and the community. There has been a different level of urgency all week in practice.”

Coaches and administrators tend to be a bit more muted in their general statements about a rivalry, but you can feel the excitement in their words beaming through.

As for Hillsboro’s A.D., Chris Schacht had this to say, “I know that every sport we offer has specific rivalries that have developed through the years, but I believe Festus is a constant that runs throughout our entire athletic program. I think they would probably say the same thing about Hillsboro. I think that the neighboring geographic nature of the rivalry adds to it as well, because many of our student athletes grew up playing with some of those guys and girls that are now on the other sideline/bench/dugout.”

But it is the players that have the most unique perspective when it comes to games of this magnitude. Whether they remember it fondly, begrudgingly or just intensely it is the epitome of memorable. And it’s fun to see the fire in their eyes when recounting their personal experience. 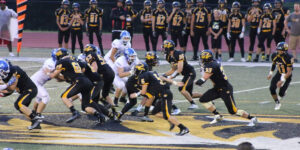 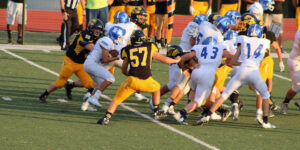 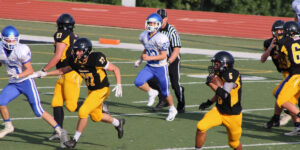 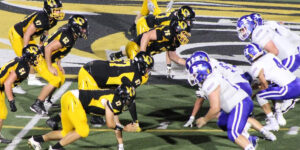 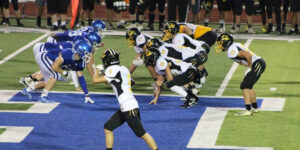 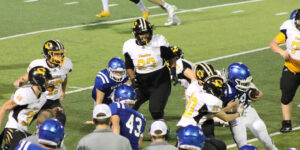 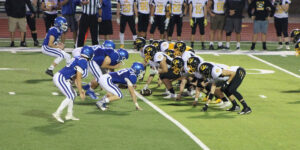 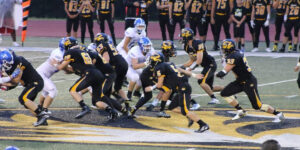 “The Hillsboro/Festus rivalry week meant you could throw the records away and what has happened prior to that point because you knew you were going to get their best no matter what. Everyone in the county and conference cares about who comes out with the win. The game always lived up to the buzz and hype you’d hear during the week. It meant WAR!”, roared Beau Thompson (Hillsboro Class of 2016).

“(I remember) the times the Varsity (team) used old Hillsboro t-shirts on the practice shields so that we would always be “hitting Hillsboro” before playing the game. Then there was the time when one of the Hillsboro classmates broke into our field and spray painted it blue and white. When we would get the roster for the upcoming season, Hillsboro was always circled. That was the game we could NOT lose,” emphatically reminisced Nicholas Palmero (Festus Class of 2009).

Recent graduates and long-time alums alike recall the intensity of the rivalry because both teams were so good… and this season is no different.

Shawn Geary, Hillsboro Class of 2012, lamented this historical nugget, “(The) Boro/Festus game almost makes or breaks a season. Senior season we had a ton of success and won 10 ball games, but not beating the Tigers that year is something I will always regret. “

Lanny Boyer, Festus Class of 1995, recalls, “Mid to late 90s, Hillsboro was always one of the better teams in the conference outside of (us). Regardless if it was ’94-‘95 when we had the clear advantage with wins that were 20 or 30-point spreads, or ‘96 where Hillsboro (and everyone else) had our number, the Hillsboro game was always the biggest. They were essentially our crosstown rivals despite St. Pius and Herky being closer. Even in ’95 when everyone knew a landslide victory was coming; I remember Hillsboro still getting real amped up. I liked playing them as much as anyone.”

And then you have participants like Kevin Lucas, who have had major impacts on the rivalry from both sides. A former football star for the Tigers (Class of ’95) and now the current baseball and softball Head Coach for the Hawks with 17 years in the district, well, he has a unique perspective. “You never knew what to expect when we played. In ’93, I believe both Festus and Hillsboro each had two running backs (myself included) that had rushed for over a thousand yards when we played each other on the last game of the season. Everyone thought the game was going to be a high scoring one and we won 9-7. I missed an extra point early in the game and then kicked a 32 yard field goal late to put us ahead for the win.”

“It’s great that the rivalry is still going and something we all look forward to every year. Now that I’m at Hillsboro coaching things have changed a little… I’ve got guys that I coach in baseball that play football and it puts a little something extra on the game for me. I’ve been able to tell stories to my athletes about the time at Festus and it makes it really neat when Festus/Hillsboro games happen.”

One thing everyone can agree on is that these two schools have an intense, colorful and exciting history that will be on display once again on Friday night. This year is on these young men to get out on that field and give everything they’ve got to get those bragging rights.  So whether you’re #BoroBuilt or #TigerStrong grab your gear, clipboards, rally towels, swag or whatever it is you need because this one is about to pop off.