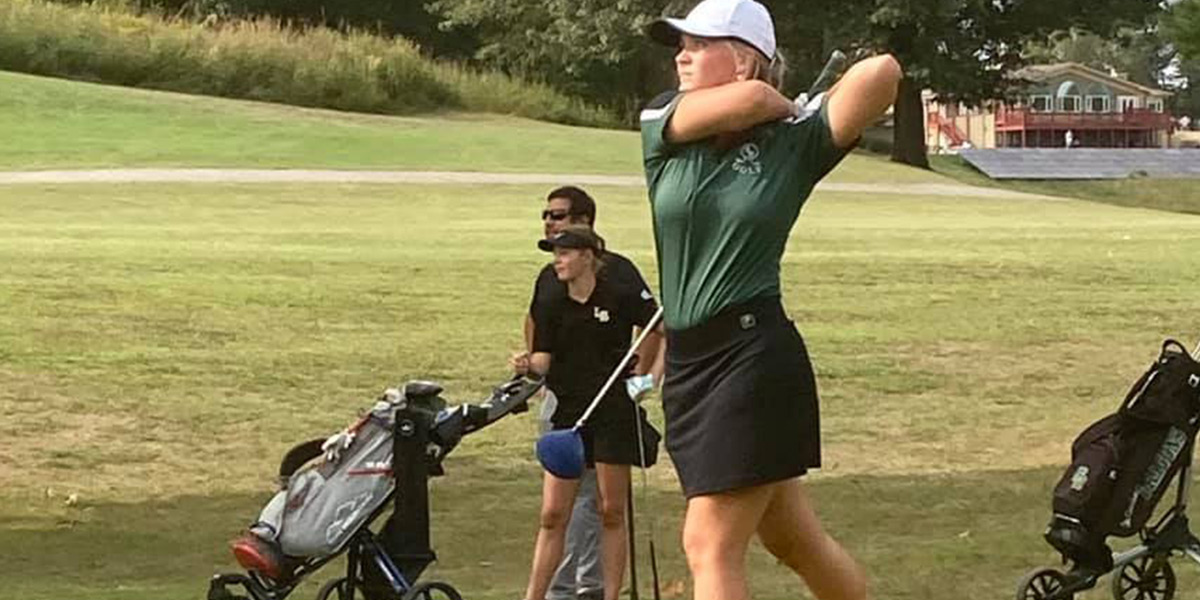 It was not the outcome Coach Rachel McDaniel had wanted for her Varsity golfers as the Ste. Genevieve Dragons lost to the Lutheran South Lancers by a match score of 226-196. However, there were quite a few positives to take away from the September 15th outing.

It was not the outcome Coach Rachel McDaniel had wanted for her Varsity golfers as the Ste. Genevieve Dragons lost to the Lutheran South Lancers by a match score of 226-196. However, there were quite a few positives to take away from the September 15th outing.

Ste. Genevieve was led by Boston Williams who managed to shoot a 54 on the front 9 at the Quail Creek golf course. Coach McDaniel was pleased to see her player shooting straight with improved putting and chipping. “Williams had a great day on the golf course… I expect (her) score to continue to go down.”

Etta Heller also played well, shooting a 56, including a tap in birdie on a par 3. Said McDaniel, “Heller also had a great day on the golf course with lots of shining moments.” According to Heller, “I was just focused on having fun because it was our home course and relaxing. I have been rushing through my shots in the past few matches, so I needed to just slow down and take my time.”

Also playing well for the Dragons was Brooke Turner, who had a fine performance shooting a 57. McDaniel commented on Turner’s play, “(She) really showed up today in a big way. Brooke is very consistent and I expect her to shoot within a certain range. I’d like to see her break out of that range and go lower. She’s definitely capable.

Rounding out the team was Regean Naeger who showed improvement while shooting a 59. “I’d like to see Regean get more consistent. She’s definitely got the skill and mentality for golf we just need to get it to translate into lower scores on the course,” said McDaniel.

On the Junior Varsity side, the Dragons hung tough but also lost the round 265-245. Ava Meyer led her squad with a 66, “She was hitting some shots, but was having trouble scoring today. If we can get her to remain positive or even on the course, I think her score will show the difference,” McDaniel added.

Madison Vaeth was just behind her teammate at 67 for her first match of the season. McDaniel remarked, “It was good to have (her) on the course… She had a pair of bogeys on the card and was putting well.”

Maggie Myracle finished the round with a 72. According to her coach, “Maggie’s swing wasn’t up to her normal standard today. She was jumping at shots and didn’t look comfortable over the ball. I’m hoping we can correct that this week and get her back to her normal game.”

In the two person scramble, Lani Yamnitz and Sydney Eisenbeis added the final score at 60 for the JV match. “Lani thrives under the pressure and hits great shots when the pressure is high. It’s evident that Sydney is working hard on her game and I like to see her working through those changes on the course.”