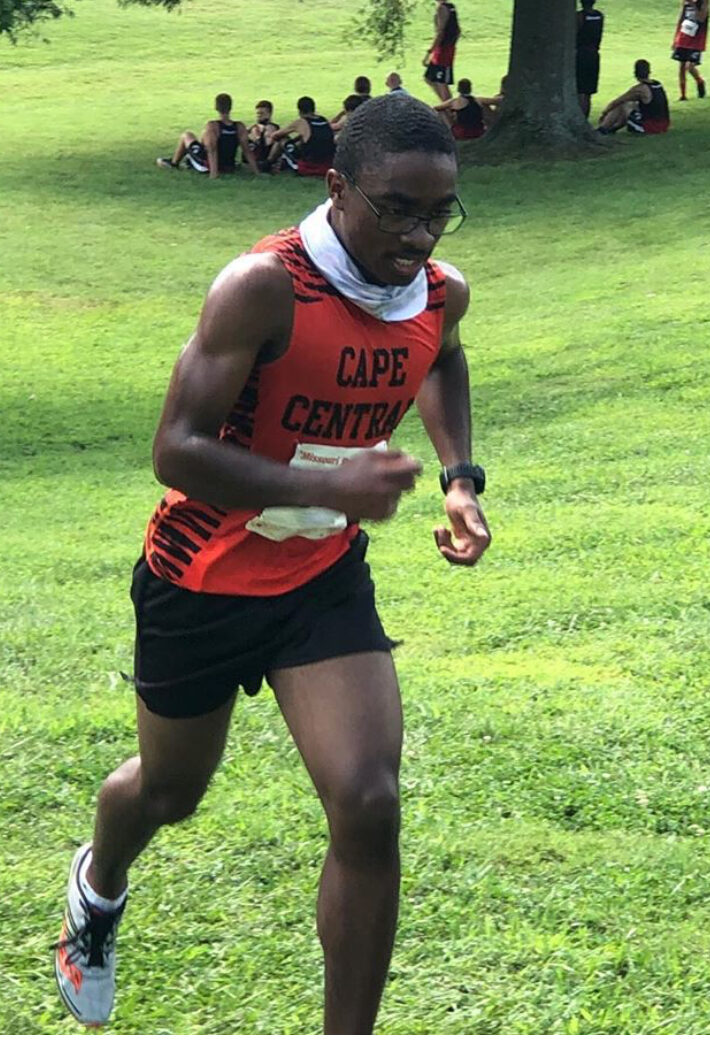 Nathan Caldwell was the lone Cape Central runner to qualify for the state meet in 2019. Head coach Logan Bollinger looks for Caldwell and Marcus Gibson to lead by example as the boys team looks for improvement this season.

The Cape Central Tigers finished in fifth place in the SEMO North Conference meet last season at Poplar Bluff.  The team hopes it was a preview of what the team could accomplish this season.  In that race, four runners, who each return this year, ran season best times, showing the improvement that had been made throughout the season.  Head coach Logan Bollinger is hoping the momentum built in that race can continue, as the Tigers prepared for the 2020 season.

“Two athletes who have been leaders on our team in the past, and have been working hard this summer, are Nathan Caldwell and Marcus Gibson,” the head coach pointed out.  “Nathan was our top runner last year, and competed at state.  He is a positive role model at practices and at races.  He has been putting in miles in the summer heat to prepare for his senior season.  Marcus has been the most consistent and hardest working runner on our team.  He is a strong leader and leads by example.  His hard work has carried on through this summer, and his hard work will pay off this season.”

CHS lost just two letter-winners from last season in Brayden Baker and Tyler Sikes.  Coach Bollinger knows if his team is willing, they can expect big things.  “Every year we expect our athletes to put in the work, and we know they will see results,” he said.  “Team spirit and unity have always been a strength of our teams.”  And as his new squad gathers for a new season, new faces always bring a sense of anticipation.  “I hope to see new freshman faces,” Bollinger noted.  “They will be amazed at what they can achieve if they push themselves.  New faces are made part of the team, and everyone encourages each other to do their best.”

The head coach also knows there will be barriers to surpass.  “The Missouri heat can be a hurdle,” he admitted.  “But it has become part of the cross country experience.  Teammates that sweat together grow a strong bond.”

It was exciting to see how quickly that bond formed, as the Tigers opened their season on Saturday, August 29 at the Jackson Invitational.  “The freshmen ran on a 1.9 mile course, and all other grades ran a 2.34 mile course,” Coach Bollinger said.  “The weather was warm and sunny, and the runners were anxious to compete under the new Covid guidelines.  All of our athletes 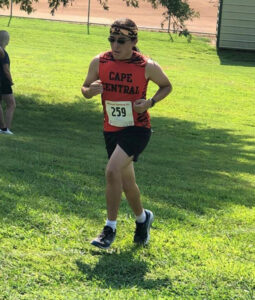 Tuesday, the Tigers placed 12th at the Fleet Feet Invitational in Arnold.  Caldwell, Central’s lone state qualifier last season, ran in his first race of the season and finished 23rd with a time of 11:09.51.  Despite some rain, Caldwell was pleased.  “It was a great race,” he said.  “It was weird to have the race start in waves.  I had fun running in the rain, but it made the course rather muddy.”

Seabaugh (11:59.45) and Moore (12:07.64) rounded out the top three.  “Both are hard workers that push hard in practice, and we look forward to seeing their improvements.” Coach Bollinger remarked.  Seabaugh said he was happy with the way he started the race.  “I started off pretty strong running the first mile at 5:48, and I felt like I kept that pace.  But I ended up slowing down.  Overall, I was happy with my time, and running in the rain was a lot better than running in the heat.”

Moore noted it was great to be on the course.  “The Fleet Feet race was a lot of fun,” he said.  “The rain and mud added a lot more to the excitement.  I didn’t run the best, but I think it was decent for the conditions we were in.  Me and Ryan pushed each other the whole way through which allowed us to do a lot better than we would’ve.  It’s nice to have that nice friendly competition to push me to do better.”

After a break, the Tigers will host the Cape Central Invitational on September 19.