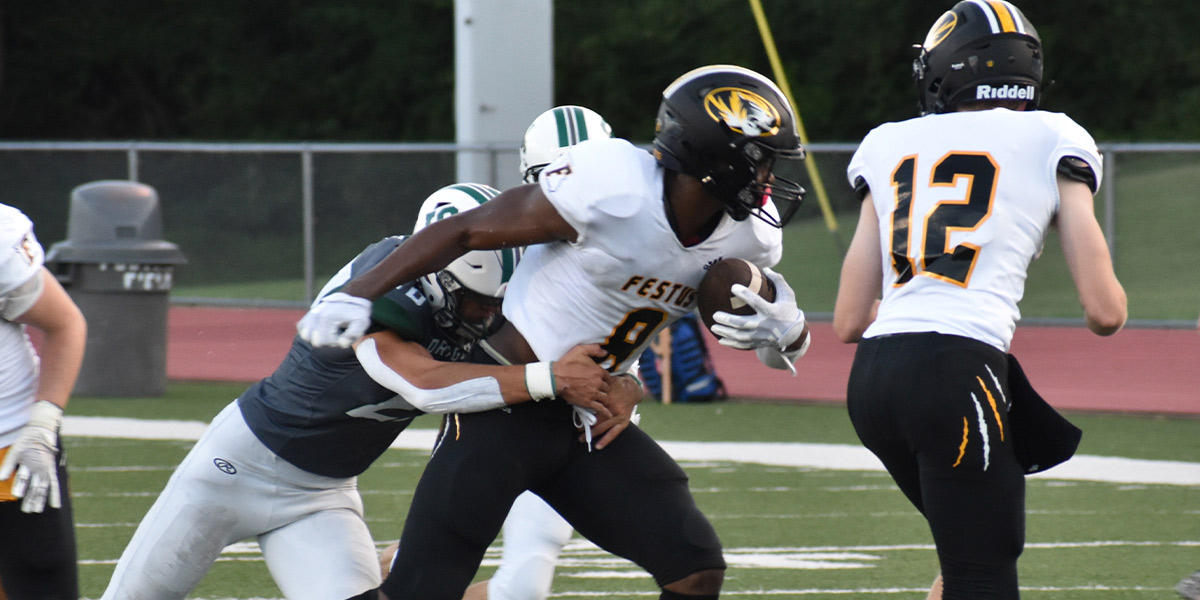 In the first quarter, Festus Football looked like an “opening night” team with a “new” head coach and a “new” system.

Coach A.J. Ofodile’s football resume is impressive.  He was an All-Big-8 tight end at Mizzou  from 1991-1993.   After being drafted by the Buffalo Bills, Ofodile played in the NFL six years before joining Barry Odom’s coaching staff at Columbia Rock Bridge High School.  Coach Ofodile replaced Coach Odom as the head coach of the Bruins in 2003, leading them to the Class 6 Show-Me Bowl in 2013.  Ofodile’s career went full circle as he rejoined Odom at Mizzou in 2016 as the Director of Recruiting.  But the call of teaching, coaching, and molding high school athletes into not only productive players on the field, but productive citizens in the community, was a call he couldn’t ignore.  He was named the new head football coach at Festus High School in January.

One of Ofodile’s reasons for coming to Festus was because of his positive impression of the many athletic, young players returning for the 2020 season.  Those athletes showed up big in a variety of ways Friday night in the season opener at Ste. Genevieve.  The Tigers created seven turnovers on defense, and four TD receptions on offense, generally a guaranteed recipe for success on the gridiron.

In the first quarter, Festus looked like an “opening night” team with a “new” head coach, and a “new” system that couldn’t be implemented for many months due to the COVID pandemic. 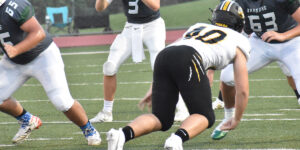 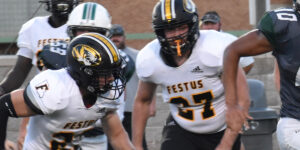 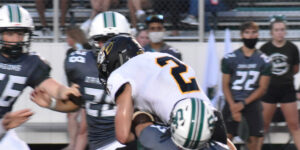 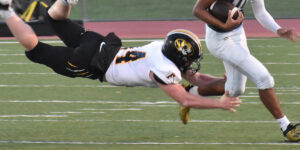 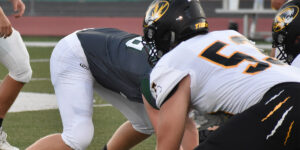 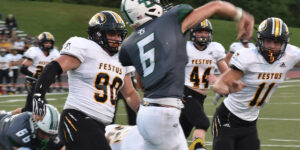 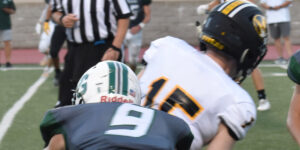 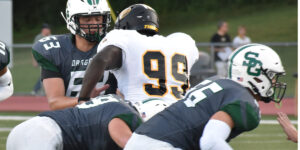 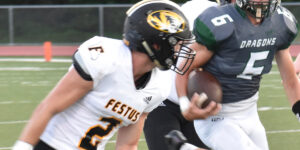 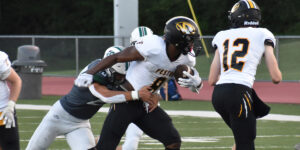 Ste. Genevieve started the game at their own 13 yard line, but thanks to multiple Tiger penalties, and a couple big plays, the Dragons drove deep into Festus territory on their opening possession.  Senior corner Collin Doyel came up with the first big Festus turnover, intercepting a Dragon pass in the Tigers’ end zone.

The Tigers first offensive possession ended with Festus gambling on a fourth and short from their own 29-yard-line.  The Ste. Genevieve defensive stop led to the Dragons punching in the first score of the night with 7:01 left in the first quarter.  Dalton Yates had a nice kickoff return out to the Festus 38 on the Tigers second offensive drive, but again, the offense stalled.

Coach Ofodile commented during a post game radio interview that “we may have set a record for penalties tonight.”  He praised the Dragons’ defense admitting, “We came in not knowing what we were going to see (Ste. Genevieve defense) from a prep standpoint since they didn’t have a jamboree.  We told our guys to just hang in there because the beginning of the game may be ugly.”

Ste. Genevieve returned the “gambling” favor on fourth down in their own territory on their next possession.  Festus QB, Cole Rickermann and his host of receivers then took over the ball game.  Rickermann teamed up with Daylen Wagoner on a nice pass/catch in the back of the end zone with 2:32 left in the first quarter.  A Stephen Darden PAT knotted things up, 7-7.

When asked about the first quarter of the game, Rickermann noted, “We just made game time adjustments offensively as Ste. Gen came out in a completely different defense compared to what we practiced all week.  Everyone adjusted nicely on offense after our first few drives.”

The second quarter was all Festus on both sides of the football as Rickermann found Doyel for a 28-yard TD pass.  An empty Ste. Gen offensive possession gave the ball back to the Tigers for their fifth possession of the first half.  Doyel later stated that. “We knew if we stuck with the game plan we would get a few explosive plays and begin to pull away.”

This set the stage for the Austin Anderson show for the rest of the quarter.  Anderson hit the trifecta, first carrying the ball in on a nice cutback for a nine-yard touchdown.  He then had an pick-six interception for the Tigers fourth TD, and followed that up with a 29-yard TD reception from Rickermann to cap off the first half scoring with Festus now holding a commanding 34-7 lead.

Anderson said that the in-game adjustments meant everything.  “Keys to our success in the second quarter were correcting our mistakes and executing our assignments, but I feel we need to improve our discipline on the ball to avoid costly penalties.”

Another Rickermann to Doyel 20-yard TD pass in the third quarter wrapped up the Tigers offensive production for this opening night, and the beginning of the Ofodile era at Festus.

Defensively the Tigers allowed Ste. Gen 249 yards of total offense.  Five different Tigers posted an interception leading to seven total turnovers for the game.  Leading the way was Luke Shaver with four tackles, two for a loss, a fumble recovery, and an interception.  Right behind him, Eli Ortmann recorded eight tackles, one for a loss, and one assist.

Festus plays in their home opener this coming Friday entertaining Sullivan at 7:00 pm.  Rickermann stated that, “I’m really excited to compete with my teammates for the home opener ,and if we come out strong, I’m confident we’ll pull out a win.” 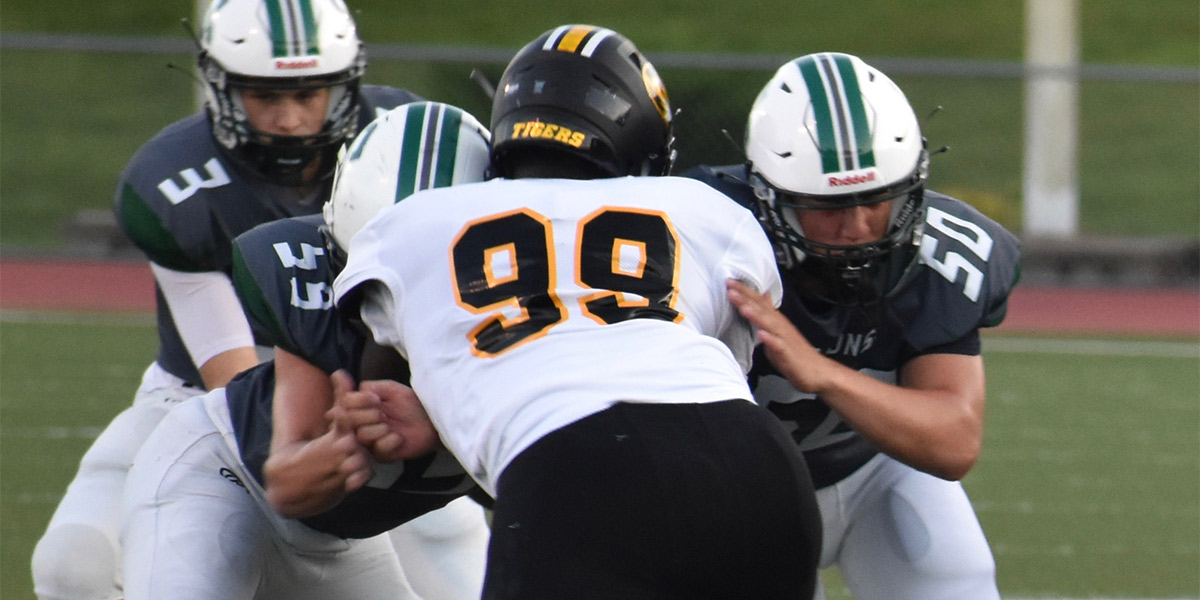