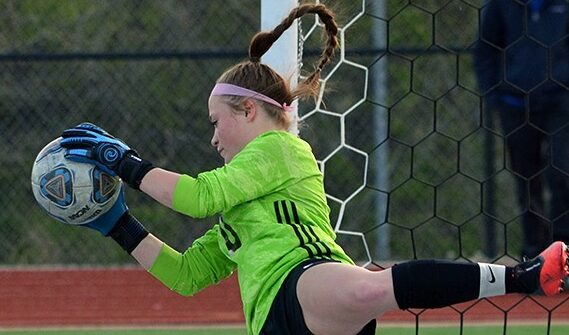 Despite some technical improvements, the Hillsboro Hawks Girls Varsity Soccer team fall 5-2 to the Winfield Warriors.

After a brief rest from their home tournament, the Hillsboro Hawks Girls Varsity Soccer team went on the road again to face off against the Winfield Warriors. Despite a valiant effort from the Hawks, they fell in a 5-2 matchup.

Winfield secured the first two goals, scoring in the fifth and 14th minutes. The Hawks’ defense stepped up afterwards and held off the Warriors, driving the ball downfield. Through a series of mishaps, the Warriors ended up scoring on their own goal, earning the Hawks their first score of the match.

Despite Hillsboro’s best efforts, Winfield would add two more goals to their tally in the 30th and 36th minutes to finish out the half with a lead of 4-1.

The Warriors would score one last goal at the 41st minute mark. The Hawks tried to mount a comeback, retaliating with a goal from Colleen Theiss, assisted by Alex Wick, but were unable to come up with any more.

“We connected more passes which led to more opportunities offensively,” Wick said. “Our communication was also better during this game.”

Baylei Clubb played in goal all 80 minutes and had seven saves. The Hawks had three shots on goal to Winfield’s thirteen.

The Hawks will hit the road again on April 20th to take on the St. Clair Bulldogs. The game starts at 5:00 p.m.