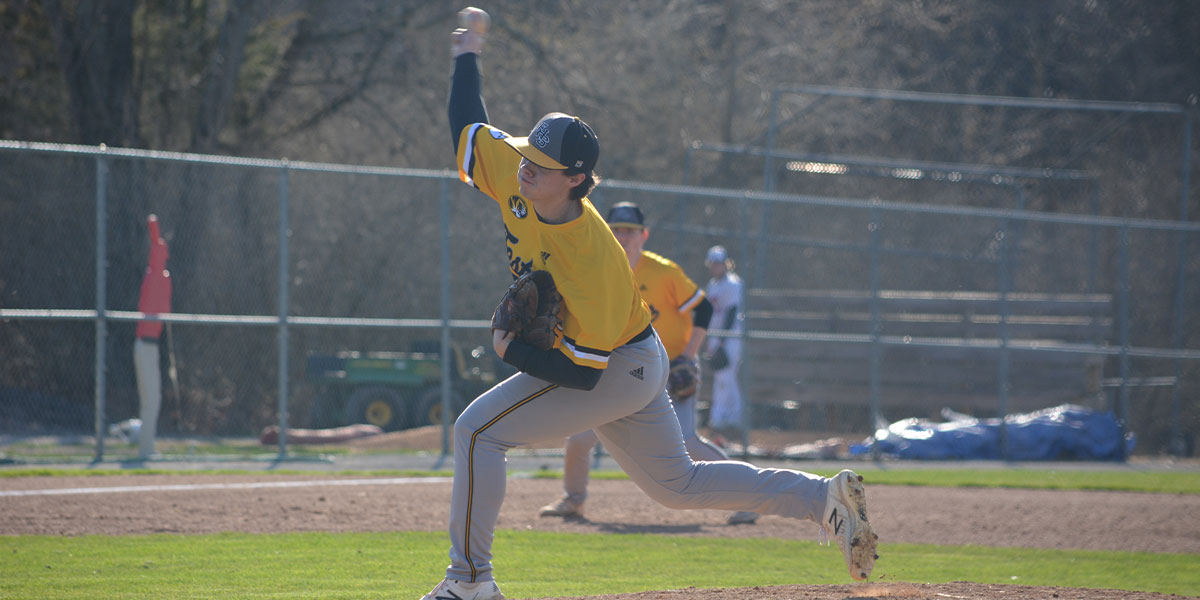 The Festus Tigers bring their record back to .500 with two wins over the North County Raiders on Saturday. Next, they take on Windsor on Monday, April 12th.

The Festus Tigers Varsity Baseball team swept their double-header against the North County Raiders on Saturday. The Tigers are 10-2 against the Raiders dating back to 2011.

The first game was a tightly contested contest until the last out was made. Festus struck first in the top of the second inning. Connor Hulsey led the inning off with a single that was followed up by Nate Moore drawing a walk. A few batters later, Cole Wagner smacked a double to left field that brought Hulsey in to score. The Tigers were up 1-0.

Festus added another run in the fourth. Wagner reached base yet again, this time on a fielder’s choice. Then, Collin Reando hit a two-out single that scored Wagner. They added another run in the top of the fifth off the bat of Moore. Jackson Gross came in to score and put Festus ahead 3-0. That was all the action either side saw for the entirety of the game. A one-two-three seventh inning locked up the 3-0 shutout for the Tigers.

Ethan Carroll threw the first four innings on the bump for the Tigers. He allowed just one hit and struck out three batters. Cameron Ford came in to relieve Carroll. He threw three innings, allowed two hits and struck out six.

The second half of the double-header was nothing like the first. It was an offensive showcase for both sides. North County got themselves going in the first inning with two runs and took the initial lead. They added to it with a big five-run third inning that put them ahead 7-0.

Festus battled back and swung the momentum their way in their half of the third. North County walked three straight batters that loaded the bases to start the bottom of the inning. The Tigers had a field day to follow. Hayden Bates hit an RBI single to start the rally. Reando then drew a walk to push in a run that cut the lead to 7-2. Then, Hulsey hit a single that knocked in two runs, and Reando scored on a fielder’s choice.

In the blink of an eye it was 7-5, but the Tigers weren’t stopping there. They drew two more walks that scored two runs and tied the game. Another walk and then a hit by pitch capped off the nine-run third inning that gave Festus a 9-7 lead.

North County kept it close. They scored their eighth run of the game in the fourth before the Festus bats went back to work. They scored two runs in both the fourth and fifth innings to bring their total to 13. North County came within two runs, but ultimately came up short. Festus won 13-11 and bumped their record to 6-6.

Gross led the team with two hits. He was 2-4 with one RBI and one run scored. Reando, Hulsey and Trent Ellis all had two RBIs. Brayden Montgomery, Wyatt Huskey and Reando all drew three walks. Montgomery also scored three runs.

“We are starting to relax,” Reando said. “Just find ways to get on base, allowing our hits to score multiple guys.”

Laine Axtetter started the game on the mound for Festus. He pitched two and two-thirds, innings allowed seven runs on five hits and struck out three. Hulsey and Ellis came out of the bullpen. Hulsey only recorded one out. Ellis pitched four innings, allowed four hits, three runs and stuck out two.

Festus has now won three games in a row and has done a much better job of scoring runs as of late.

“That win against Perryville was a really big confidence booster,” Wagner said. “I think ever since that game we’ve just been feeding off of that energy.”

Things are starting to come together for the Tigers, and they are picking up momentum as the season rolls on. Their next challenge will be the Windsor Owls on Monday, April 12th.