The South Iron Panthers Boys Varsity Basketball squad flies past the Clearwater Tigers 95-19 on Tuesday. The Panthers have beaten Clearwater 13 consecutive times dating back to 2014.

The South Iron Panthers Boys Varsity Basketball team dismantled the Clearwater Tigers 95-19 on Tuesday for their eighth win in a row. The Panthers have won 13 consecutive matchups with the Tigers dating back to 2014.

The Panthers were coming off of arguably the biggest win in their program’s history against CBC. Well, South Iron had absolutely no “big win hangover” from that game as they took care of business from the opening tip against Clearwater.

The first quarter was about as one-sided as a quarter can get. The Panthers ran up and down the floor with ease and got whatever shot they wanted on offense. They out-rebounded the Tigers and locked them up defensively so dramatically that by the end of the first they were up 35-0.

Clearwater got on the board in the second, but overall didn’t have much more success. The Panthers, meanwhile, continued to play at a fast pace and convert on offensive opportunities. They outscored the Tigers 31-6 in the second and led 66-6 at halftime.

The third quarter was more of the same. If the outcome was still in question,  the Panthers provided the answers in the third. They won the quarter once again 24-5 and carried their massive lead into the final eight minutes. Clearwater did outscore South Iron in the fourth, but the lead was far too much to overcome. The Panthers won 95-19 and improved their record to 17-3. 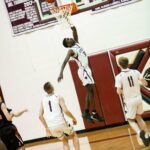 “We just played good team basketball,” Jacob Leverett said. “We all worked together, sat down on defense, found open shots, moved the ball and pushed in transition.”

Brock Wakefield led the charge with 21 points. He also racked up nine assists and six rebounds. Drenin Dinkins scored 18 points, pulled down six rebounds and dished out three assists. Dinkins and Wakefield put on a three-point shooting show, as they each made five shots from beyond the arc. DJ Prater and Jermarco Burse each scored 14 points. Burse pulled down 12 rebounds, which led the team, and gave him a double-double. Champ McMurry scored 16 points, grabbed six rebounds and made four shots from three-point range. Lucas Lunyou scored 10 points and spread out seven assists.

The Panthers have won 12 of their last 13 games, and show no signs of slowing down. Their timing couldn’t be better with the regular season winding down and the district tournament just around the corner. The Panthers’ next challenge is Park Hills Central on Friday, Feb. 5. They previously beat Park Hills in the championship of their Christmas tournament just over a month ago.