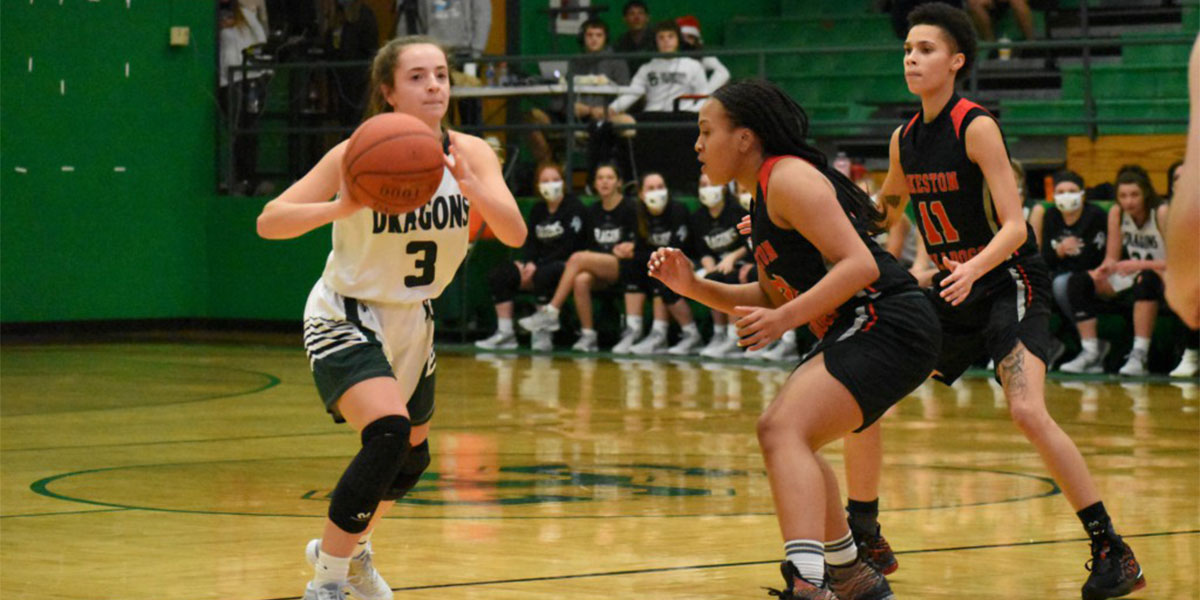 The Ste. Genevieve Dragons dominate the Potosi Lady Trojans 60-26 on Thursday and improve to 14-4. They now have 13 consecutive wins against Potosi dating back to 2015.

The Ste. Genevieve Dragons Girls Varsity Basketball team blew past the Potosi Lady Trojans 60-26 on Thursday for their tenth win in a row. The Dragons have now beaten the Lady Trojans 13 consecutive times dating back to 2015.

Ste. Gen’s historical dominance of Potosi did not change Thursday. However, the Dragons did get off to a slow start. Megan Aubuchon scored six in the first, but she was the only Dragon to score in the quarter. Potosi scored 12 and held an early lead.

Ste. Gen’s offense came alive in the second. The attack was yet again led by Aubuchon who added eight points to her total and Sydney Bumgardaner got on the board with six points in the quarter. The Dragons completely flipped the script and outscored Potosi 23-4. They led 29-16 at the end of the first half.

The defensive intensity from the Dragons continued into the second half. They absolutely suffocated Potosi and did not allow one made shot from the floor in the third. Aubuchon continued to be the Lady Trojans biggest problem and added five more points in the quarter. Potosi made two free-throws in the quarter and was outscored 13-2 by the Dragons. Ste. Gen entered the fourth with a commanding 42-18 lead.

The Dragons continued to build on their lead as Aubuchon had eight more in the quarter and Maci Reynolds helped out with five of her own. Ste. Gen closed out the 60-26 win and bumped their record to 14-4.

“I think our team had good ball movement and we had a lot of fast breaks,” Aubuchon said after the win.

Aubuchon led all scorers with a whopping 27 points as she scored the ball at will almost the entire night. Reynolds drained nine points and went 4-4 from the free-throw line. Abby Moore scored seven and Marysa Flieg scored six.

The Dragons are currently red hot and rolling through their schedule. They have won ten straight, but their season doesn’t get any easier. Their next game is a rematch with Park Hills Central.

Ste. Gen previously lost to Park Hills in the championship of the Park Hills Christmas Tournament at the beginning of January. The Dragons will seek revenge for the stolen tournament title on Monday, February 1st.