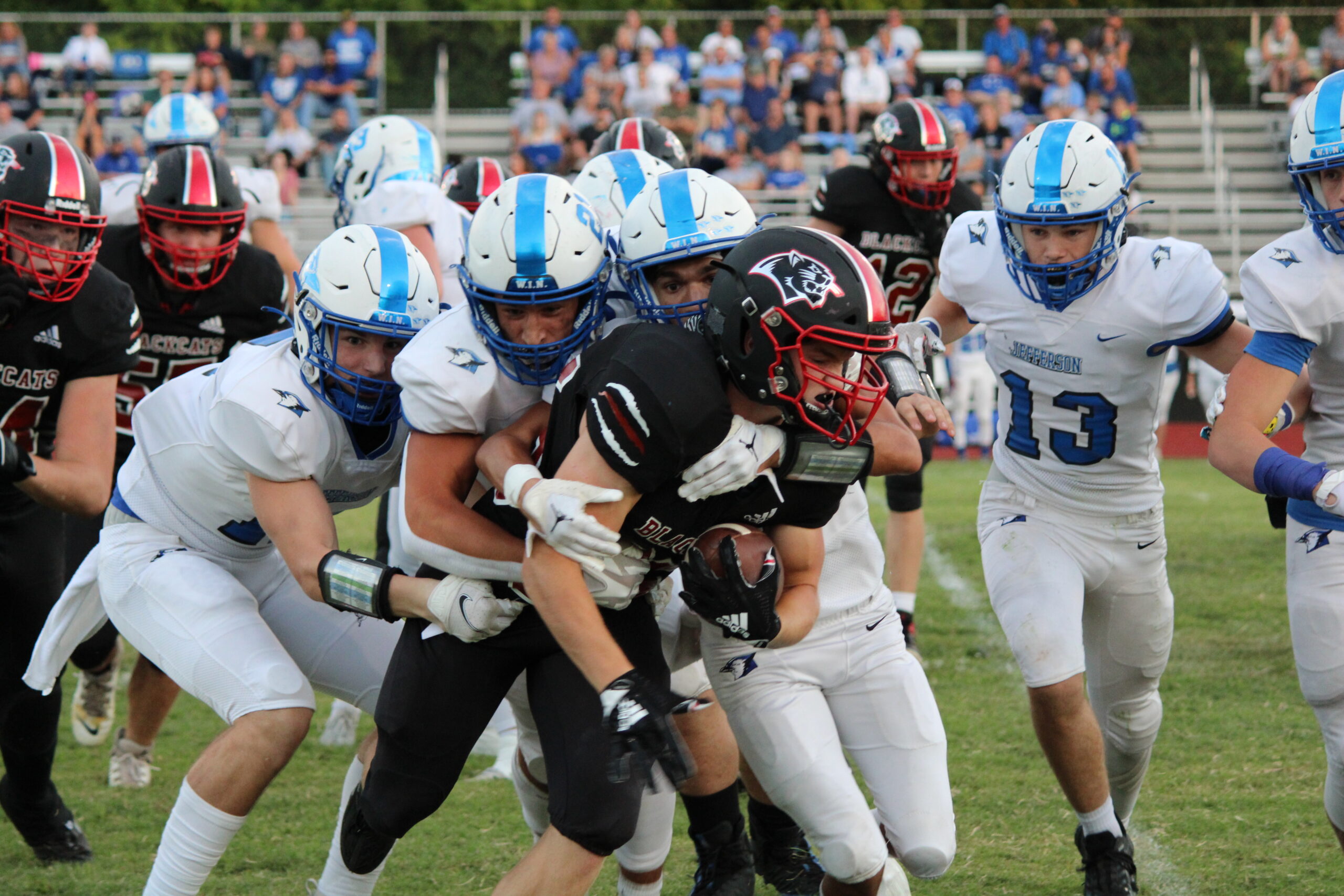 The Herculaneum Blackcats continue to impress this season with a clutch 16-8 victory over the Jefferson Blue Jays to move to 3-0.

The Herculaneum Blackcats defeated the Jefferson R7 Blue Jays 16-8 Friday night at Herculaneum High School. It was the first time since 2014 that a Herculaneum football team had defeated Jefferson, and Friday’s victory added a new hero to the Blackcats’ eye-popping success thus far in 2022.

Senior running back/linebacker Mike Moloney usually stars more on the defensive side of the ball, racking up tackles for coach Blane Boss every Friday night. But against Jefferson, Moloney was asked to do more on offense as starting quarterback Jackson Dearing was limited due to an injury. So, Moloney picked up the slack.

After a scoreless first quarter for both teams, Moloney got going, scoring on a seven-yard scamper to the end zone that gave Herky an 8-0 lead after a successful two-point conversion by, who else, Moloney with 5:50 remaining in the half.

The lead for the Blackcats wouldn’t last long though, as Jefferson’s Sean Usery scored from a couple of yards away with just 47 seconds remaining. The Blue Jays also converted a two-point try, knotting the game back up at 8-8 heading to halftime. This had all the makings of a tight one.

The third quarter was uneventful from an offensive standpoint though and resulted in both teams unable to shake loose of each other’s opposite defense. Herculaneum and Jefferson were still knotted at eight apiece heading into the final 12 minutes of play, setting the stage for a dramatic showdown.

And just like that, Moloney would again find pay dirt with just over eight minutes remaining in the game, as Dearing found his Senior teammate from seven yards out to give the Blackcats a 16-8 lead. The successful two-point conversion was, once again, converted by Moloney.

Moloney and Co. were able to hold off any Jefferson attempt at a score to seal the deal and give Herculaneum and Coach Boss their third win in a row to start the season. It’s been quite the ride so far for this surprising Herky squad.

“He had a tremendous game,” Boss said about Moloney’s performance. “He was all over the field on both offense and defense tonight. I can’t say enough about what he means to this team. He had a heck of a day.”

Moloney did everything for the Blackcats, rushing 15 times for 49 yards and adding a touchdown. He also caught a touchdown, scored both two-point conversions, recovered a fumble on defense and added five tackles and assisted on eight others.

Dearing managed 11 completions at quarterback for 95 yards and threw an interception, but did manage to toss the game-winning TD.

Usery led Jefferson offensively, finishing with 12 carries for 61 yards and added the lone touchdown for the Blue Jays.

Herculaneum (3-0) will try and keep its perfect season intact next Friday on the road against Class 1, 7th- ranked St. Vincent (3-0) at 7 p.m. at St. Vincent High School in Perryville.

If you missed any of the action Friday, rewatch it on the Streamline Sports app. Available for iPhone/Android, Roku, Firestick and Apple TV.