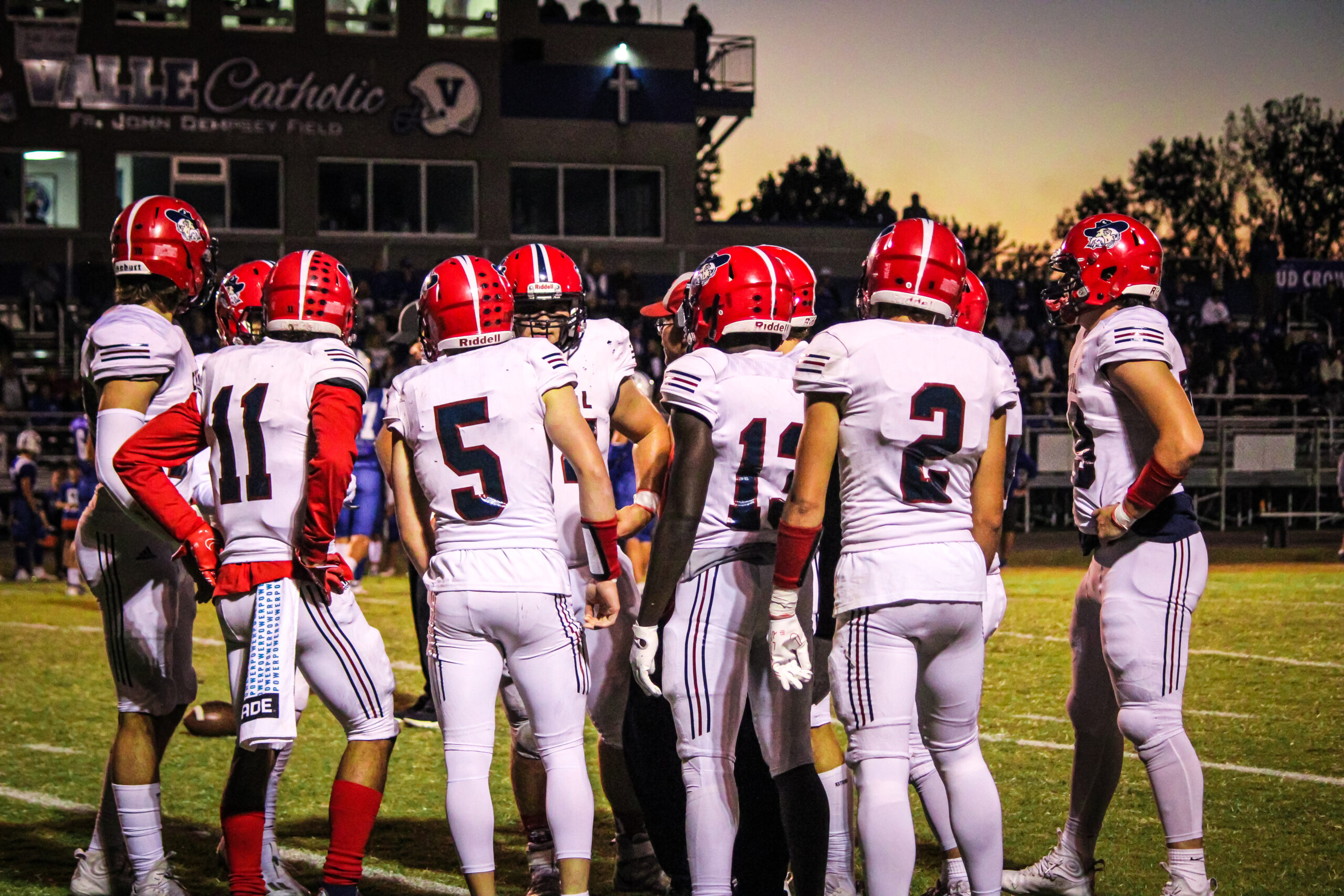 After an incredibly successful season, one that some people didn’t see coming, The Central Rebels fished with a heartbreaking State Quarterfinal loss to Cardinal Ritter. As we began writing our season recap of the Rebels accomplishments, we asked Head Coach Kory Schweiss, always the insightful, consummate professional, for his feedback. Frankly, we couldn’t have said it any better ourselves… so with further ado, here are Coach Schweiss’ thoughts on the Rebels 2022 campaign.

“After a little over a week to reflect back on a tremendous season, it was bittersweet. We probably exceeded expectations from many people, but we thought we should have gone the distance when it was all said and done.

After graduating 18 Seniors, many of them starters, many people and teams in the area thought that we would be rebuilding this season. There were people in our program that thought we were the 2nd best team in Class 3 last season behind St. Mary’s, and we had some big shoes to fill. With many new faces, we were able to get right back in that discussion again this season.

With Evan Weiss, Jaxon Jones and Mason Williams hurt early in the season, we had guys step up and we were able to get out to a winning start with impressive wins against some really good Class 5 teams in Poplar Bluff and Cape Central. At the time, they were good wins, but after the season, they look even more impressive after the Final Four run that Cape was able to go on in Class 5. Not only did we beat them without one of our best defensive players in Jones, but we had a running clock after the first drive of the 2nd half.

After that win in week 4 and getting Jaxon back in week 5 vs Ste. Gen, we were getting healthier. The matchup with Ste. Genevieve was a big one as we both came into the game undefeated. After another dominant performance against a top 10 team, I think many people were starting to believe that we didn’t just rebuild, but we reloaded. Casen Murphy was starting to make a name for himself and Kannon Harlow was starting to emerge as another big time weapon to go alongside all state WR Jobe Bryant.  After a 5-0 start, and all in convincing fashion, the schedule didn’t get any easier as the next week, we had to travel to Father John Dempsey Field to take on another undefeated and #2 ranked Valle Catholic.  Our kids were confident and loved the challenge that lay in front of them.

That week 6 matchup with Valle was an instant classic, as many people said that it was one of the better HS football games that they’d watched in years. It was a highly anticipated matchup because it was a battle of 2 of the premier football programs in this area. The two teams had been in the top 5 of their respective classes for over the last decade, Central in Class 3 and Valle in Class 1. However, with Valle having to bump up two classes because of a success factor implemented by MSHSAA on private schools, Valle had been shifted to Class 3. With that move, Valle Catholic then switched conferences into the MAFC White Division where Central had been the dominant team for years. Now with two dominant teams in the same conference, someone had to be knocked off. All of this had led to the anticipation of this game. The game itself did not disappoint. It was a 7-7 tie at halftime, and Central took a decent 30-21 lead with just over 9 minutes left in the game. Remember that score, because later there will be some foreshadowing. However, Valle did what Valle does and they fought back, and they did it convincingly, scoring 19 points in the final 8 minutes of play and beat Central 40-30 giving Central its first loss of the season, and keeping Valle undefeated.

Central went on to win convincingly over the next month with dominant wins over Farmington and Ste. Genevieve again, which are always big wins for Central’s program. In that stretch, Bryant made a MAX PREPS #1 play in the nation with a punt return that he had vs Dexter that was one of the most remarkable HS plays that many fans had ever seen. With all of these wins and the District Semifinal win vs Ste. Genevieve, it set up a big time rematch that everyone anticipated vs a Valle Catholic team that continued to dominate their opponents as well.

Going into that game, Valle was 10-0 and Central was 10-1 with that only loss being to Valle. It was a District Championship game that many wanted to see. These were arguably two of the top three teams in the State in Class 3, as they also were the year before. Many wanted to see this game in 2021, but now they were getting to see it twice in 2022.

In the week leading to the game, PJ Jones, Central’s defensive coordinator, had posted pictures of Valle’s scoreboard of:  Central   30          Valle Catholic  21   with 9:21 to go in the previous game all over the school.  There were over 200 pictures of this in the hallways, on the doors, in the weightroom, etc.  The message to the team was………. If you had this chance again, could you finish what you started?  The answer from the players was YES, if they only could get that chance again.

I believe in divine intervention and as God would have it, as the game played out in that District Championship, it was amazing to me to see that the score would be Central 30 and Valle 21 with about 6 minutes to play. The message was simple………. Can you finish? And unlike the first time, Central did finish and that was the final score. That score represented so much more than a District Championship.  It represented what the Central Program preaches daily. There is so much more than football represented in this game. Relationship is the main focus, whether it is with God, a coach, a teammate or all of the above. That score was an example of that. It was one of the most impactful things that could have happened because, what were the chances that that exact score would appear on that exact scoreboard after preaching it all week long? That just doesn’t happen unless God puts it there and wants something good coming from it.

Although the season ended the next game vs #1 Cardinal Ritter in the Quarterfinal game, I think that the message was sent this season that Central is a team that has continually put a good product on the field and they do it the right way. Central was probably only a couple plays away from defeating Ritter, and that is what makes it bittersweet. However, it will not take away from the success of this year’s football team. Central finished at 11-2 with 2 very competitive losses to the #1 and #2 ranked teams in the state.  Central also beat the #2 ranked team when they had the rematch, knocked off another top 10 team in Ste. Genevieve twice, knocked off a Final 4 and Final 16 team in Class 5, and won their county rivalry game vs Farmington very convincingly. Also, Central was able to continue their streak of winning the Conference or District (or both) for 11 straight years and 12 out of the last 13. The one year (2011) that they didn’t, they won their first ever playoff game when they were the 2-seed before switching to the new playoff system. That’s a pretty remarkable 13-year stretch by any standard.

As far as team and individual leaders, there were many that stood out. Murphy, Bryant, and Kannon were our offensive leaders. Casen and Jobe were Co-Offensive Players of the Year in arguably the toughest Class 3 Conference in the state, considering 3 of the 5 teams in the conference were in the top 10. Valle’s only loss was to us, Our only losses were to them and Ritter, and SG’s only losses were to Valle and us twice. Casen was as dominant as any QB before him, throwing for over 2600 yards and 33 TDs to only 4 Ints. He also ran for over 800 yards and 9 more TDs. Jobe broke our school record with 188 points scored with 30 TDs and 4 2pt conversions. Jobe also broke every receiving record that we have, as he now owns all single-season and career records in receptions, receiving yards and receiving TDs. He also broke the school record in return TDs as he had 6 of them this season. Jobe had 61 rushes for 673 yards (11.0 avg), he had 64 catches for 983 yards (15.4 avg and he had 22 defensive or special team returns for 854 yards (38.8 avg). In other words, Jobe averaged 17 yards every time he touched the ball.  He had 2510 yards on 147 touches. Harlow also emerged with almost 1000 yards of offense. He had 753 through the air and 169 on the ground and scored 12 TDs. Those guys couldn’t put up those offensive numbers without the five guys up front blocking for them. Nathan Weinhold,Weiss, Logan Murray, Sammy Callaway and Triston Stewart were all pretty dominant offensive linemen as Stewart and Callaway were KTJJ Dream Team selections, Weiss was a returning All-Stater and Murray and Weinhold were recognized as All-Conference selections. All five of them getting recognized in some fashion or another shows just how good the whole unit was.

As far as defense, this ended up being one of the most dominant defenses Central has ever had. The defense set a record for most turnovers created and most points scored while on defense. One of the most remarkable stats was that going into the last game, our defense had scored more points than our starters had given up. I’d say that is dominant. Individually, Ty Schweiss led the defense with 113 tackles from his Nickel position. He also was involved with 11 of those turnovers. Jones was right behind him with 111 tackles and he even played the first game with a broken foot and missed 3 games. He solidified our defense when he returned. Our secondary was tremendous all year as no one was able to consistently throw the ball on us. With Casen, Jobe, Kannon, Hakin Wagner, and Ty in the secondary there was no room to throw the football. Four of those guys are already All-State in some sport and Ty likely will make All-State in football this year. Kannon and Hakin were All-State in track, Casen was All-State in baseball and Jobe was All-State in football and basketball. At linebacker, Triston and Jaxon were stellar in the middle. Once we moved Triston back and Jaxon got healthy, our defense was almost impossible to score on. The starters didn’t allow a point in the 5 games between the two Valle games.  Then giving up only 21 points to Valle with 7 of those coming on a punt return is just as impressive. With Sammy Callaway anchoring the DL, Weiss, Murray, Weinhold, Eli Rasnic and Williams all played an integral part at times in playing their roles in the dominant defense. As far as individual records, Murphy tied the season record for interceptions with 7 and the career interceptions with 14. Casen and Jobe will be battling each other next season for the career lead in interceptions as Murphy has 14 and Bryant has 12.

All in all, this was a successful 2022 season. I’m pretty sure these boys surpassed the expectations from outsiders, but they fell a few plays short of fulfilling their own expectations because this was probably the most confident group that we’ve had the pleasure of coaching. I truly think that they thought they should win every game that they played. We look forward to getting most of these guys back next season and trying to reach that ultimate goal.  GO REBELS!”

Congrats as well to Coach Schweiss and his staff, who are certainly an unparalled bunch.