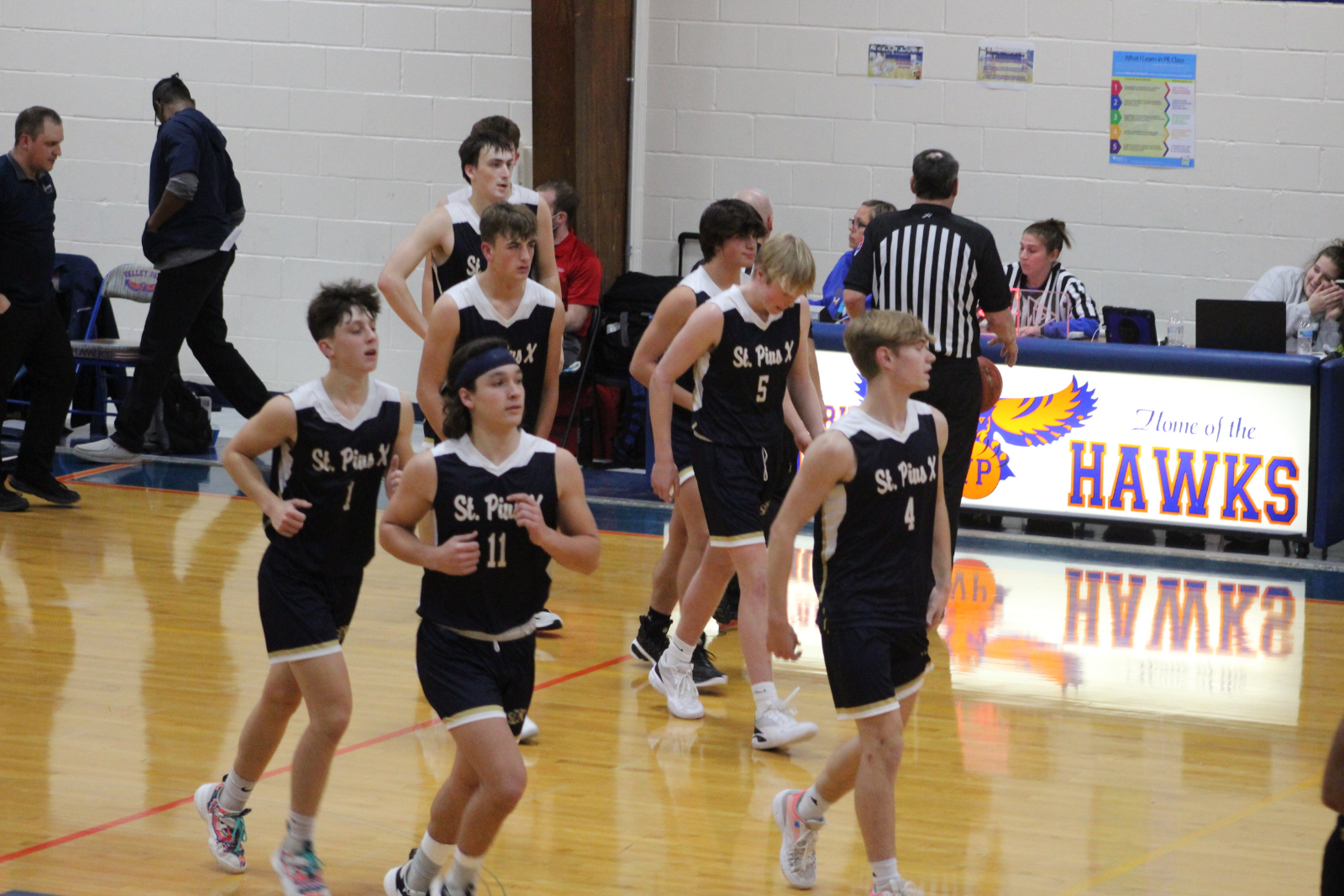 The St. Pius X Lancers drop their second straight, falling in the opening round of the Valley Park Tournament to the host squad.

A basketball game is filled with a multitude of momentum swings where teams experience ups and downs throughout the course of a single game.

On Monday night, the Lancers might have thought they were on a Six Flags roller coaster rather than playing a basketball game at Valley Park.

“I thought our defensive effort was there tonight, but several of our guys tried to do more than what was needed of them, which led to turnovers,” said Miller. “We have to trust the other guys on the court and on the bench to do their jobs and play within ourselves.”

The Lancers opened the game with a 6-0 run, thanks to consecutive 3-pointers by Junior Patrick Flanagan. However, the Hawks put together their own 8-0 run to counter, forced nine Lancer turnovers and closed the first quarter with a 26-14 lead.

The second quarter began much like the first ended as the Hawks jumped out to a 31-16 lead midway through the second frame. Momentum began to swing in the Lancers’ favor as they mounted a 15-2 run, capped by a two-point bucket by Senior Dabrein Moss, and brought the score to 33-31 with under a minute to go before halftime. Unfortunately, momentum did not wait for a buzzer as Valley Park capitalized on several careless mistakes by St. Pius in a series of plays to close the half and push the score to 40-31 at the break.

“To fight all the way back in the second quarter and cut their lead to two was big,” said Coach Miller. “However, we made a bunch of bad decisions and given the way the score ended up, it probably turned the tide of the game.”

St. Pius X came out of the locker room flat and struggled to score in the third quarter, shooting 2-12 from the field in the frame. The Hawks, however, rode the momentum swing into the third quarter as they held the Lancers to seven third-quarter points and held a commanding 52-36 lead going into the fourth.

The final quarter fared nearly the same for St. Pius X as Valley Park maintained control of the lead, never dropping below a 10-point advantage. The Lancers would try to foul to stop the clock, and were given opportunities to slice into the lead as the Hawks shot 4-11 from the free throw line in the fourth quarter alone. Those opportunities failed to turn into points as they continued to struggle to score, shooting 5-16 from the field.

“Too many turnovers lead to other opportunities for the other team to score, and we gave them extra chances. If we cut down on those, do a better job of eliminating second chance shots from rebounds, and move the ball on offense, this game could have gone a different way,” said Coach Miller. “We have to learn from these mistakes and get better. There’s a long season ahead of us to improve and play good basketball.”

John Whitman led the offense with 14 points and nine rebounds, while Moss tied for the team lead in scoring with 14 points, seven rebounds and three assists.

St. Pius X falls to 0-2 on the season and will play Tuesday night against Valmeyer at 6:00pm again at Valley Park.