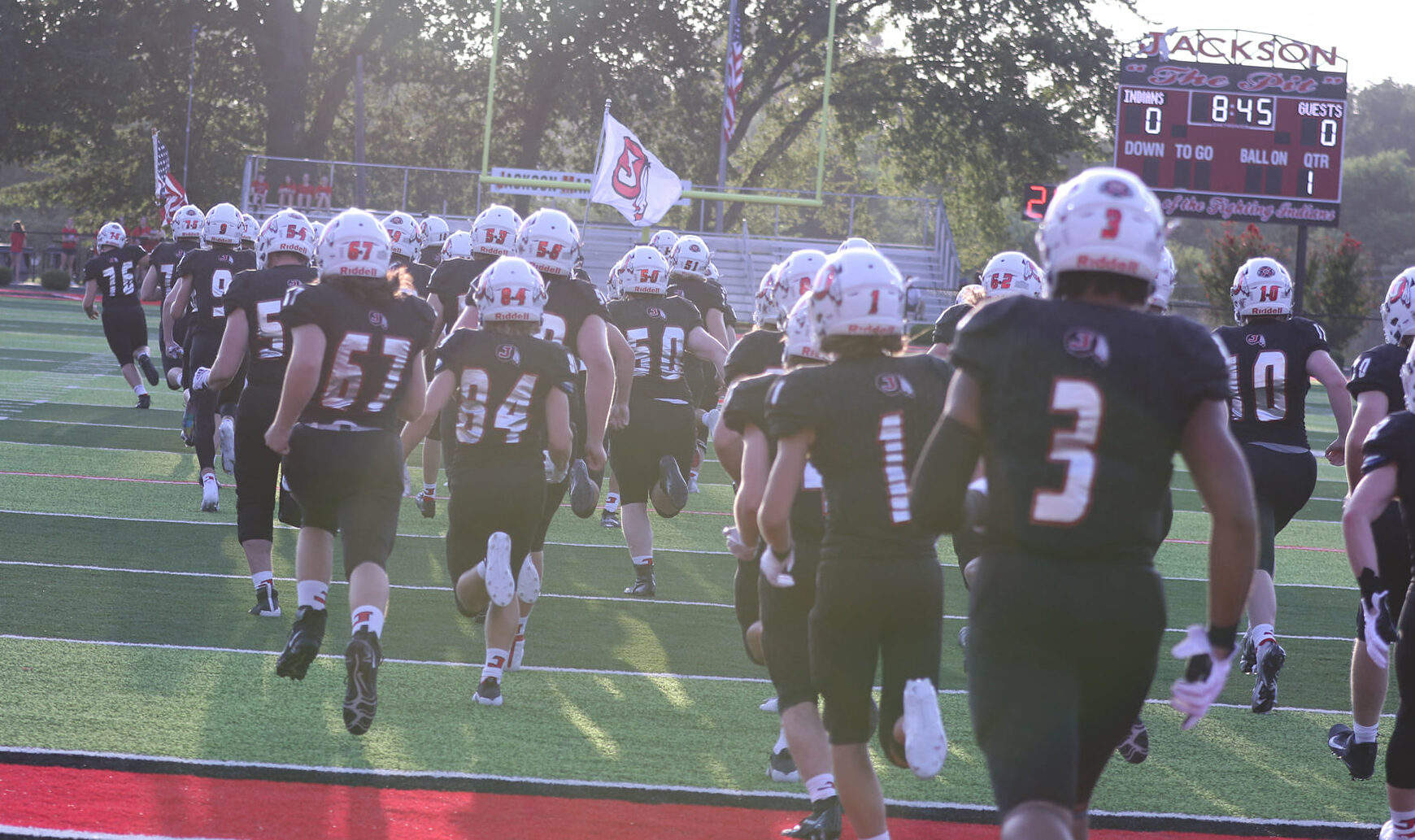 The Jackson Indians hosted the Edwardsville Tigers in Week 1, but after holding a big lead, fall in a double overtime heart-breaker 41-34.

Unfortunately, streaks are made to be broken. Case in point, on Friday night the Jackson Indians suffered their first regular season loss in nearly five years, dating all the way back to 2017. The perennial powerhouse was sitting on four consecutive perfect regular seasons, but the Edwardsville Tigers intervened at The Pit in Week 1 by mounting an impressive comeback, before sealing the deal in double overtime with a 4th down interception to cement the victory in dramatic fashion.

It’s certainly not the way the Indians drew up the beginning of the 2022 campaign, but the game started out gangbusters for the Tribe. New Quarterback Zach Calder got the scoring started quickly at 7:33 of the first quarter with a 15-yard strike to last year’s breakout star Isaiah Davis. Six minutes later, starting running back Tony Williams found a hole and plowed five yards into the end zone to give the Indians a 14-0 advantage after just 12 minutes of play.

Things kept rolling Jackson’s way in the second as Calder found an open receiver again. This time it was Kai Crowe with a 20-yard TD courtesy of his new QB, and the Indians were cruising with a 20-0 lead. Edwardsville found the end zone on an two-yard rush late in the quarter to get on the board, but Jackson had the game firmly in hand with a 20-7 lead as the clocked flashed all zeros, essentially sounding the halftime alarm.

It appeared the Tigers had found their momentum though, because they came out gunning in the third quarter and tacked on another TD within the first minute. Thankfully Jackson had an answer on the ground with a one yard rush by Jason Goodman to make the score 26-13 in favor of the Indians, but Goodman was thrust into a starting role after Williams was injured in the first half and would not return. The Indians also had a first-half rushing touchdown by Co-QB Adrian Fox called back because of a questionable holding call that would have put them up by three scores. This would end up making all the difference in the world.

The blows kept coming after that, and the fourth quarter was a circus. Edwardsville did the only scoring in the frame with a pair of unanswered touchdowns, but the Jackson special teams defense stepped up and blocked a PAT, which would lead to an eventual at 26-26 stalemate at the end of regulation. So, as it so often does, overtime loomed.

The Indians’ offense got the job done in the first OT, with Calder connecting with Davis once again for a nine yard bullet that put the Tribe up six. Fox then came on for the two-point conversion and rushed it in himself on a nifty move to put the Indians up by eight, but the Tigers of Edwardsville had other plans. They marched down the field and used a 29-yard passing play to get those six points back, before converting on a two-point play of their own.

And so double overtime was suddenly upon these two grappling squads.

Edwardsville struck first with a four yard run that put them up 41-34, but Jackson still had life. They were working down field, but ultimately found themselves looking for a completion on fourth down with just four yards to go for a chance to keep the game alive. Sadly, Calder’s pass was picked off and the Tigers completed the dream comeback, handing Jackson their first regular season loss in years.

Certainly not the ending the Indians and their loyal fanbase were hoping for, but they played a tough game on the road against an unfamiliar opponent and there were certainly positives to take away from this one. The two-QB system may be a work in progress, but the new signal callers performed nicely in the loss. Calder carried the bulk of the load and was 24-of-39 for 178 yards and three scores, while Fox impressed with his legs on the two point conversion and the TD that was wiped out by a penalty.

Williams controlled the backfield in the first half with 57 yards and a score on 14 carries, but Goodman filled in admirably after Williams’ injury with 45 yards and a TD on just nine carries. As for the receiving core, Davis led the way in targets with nine and touchdowns with two, but Chase Fischer collected a team-leading 73 yards on eight grabs to make a statement. As a team the Indians totaled 334 yards on 82 plays and only turned the ball over once (although it was a costly one).

The defense was strong in the first half and forced a pair of fumbles in the game, but they ultimately couldn’t stop the Tigers’ offense when it came down to the wire. Overtime is exciting and double overtime is excruciating… but even more exciting, so this was a game for the ages. The story just loses it’s luster when you’re on the receiving end of a heart-breaking loss like this one.

Thankfully it’s just one game and the Indians have a whole season in front of them to continue to improve and get back to terrorizing their opponents. Next week they will look to get into the win column against Francis Howell in their second consecutive road game to start the season.