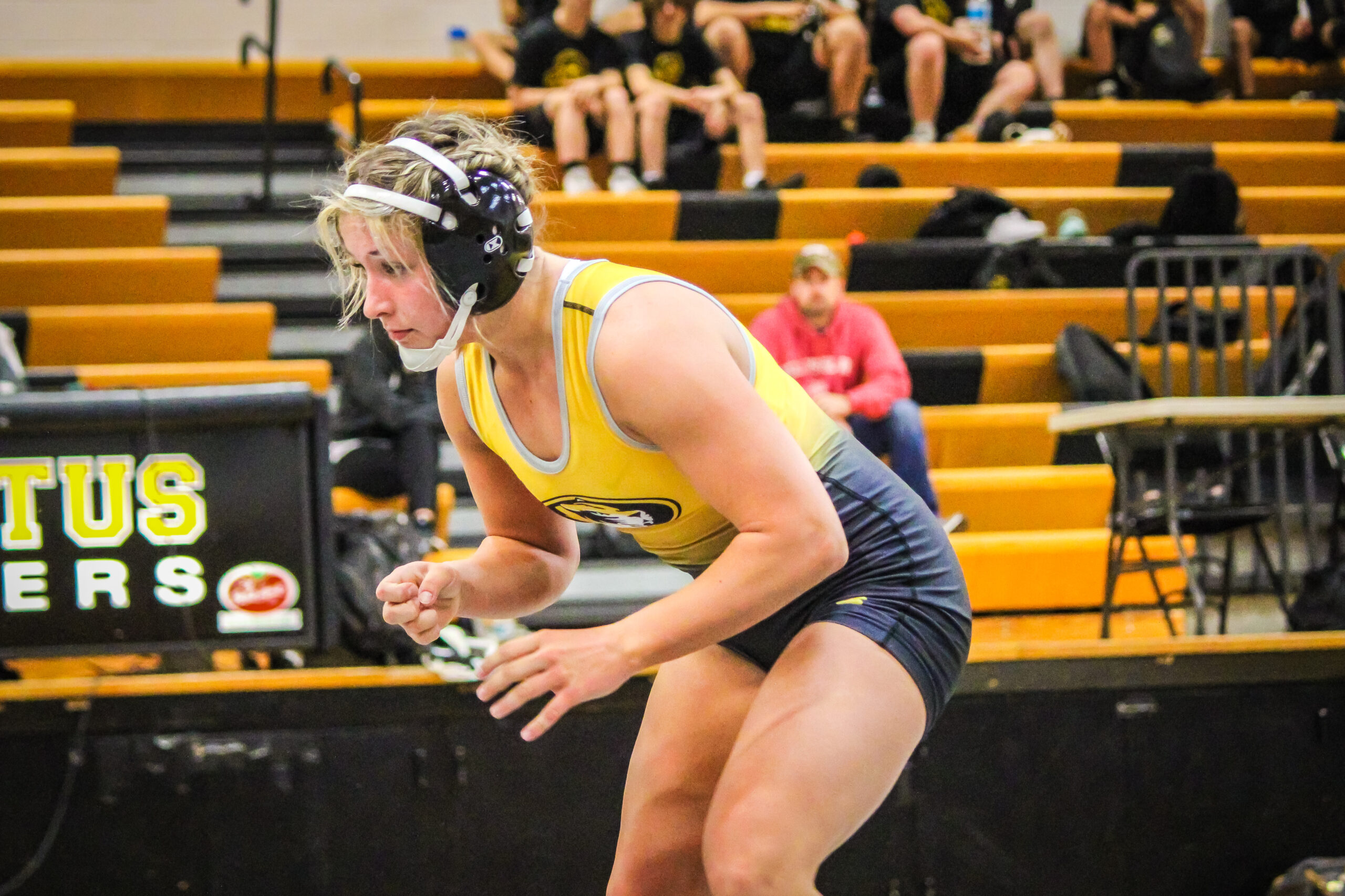 The Tigers take five to Columbia, including three girls and two boys, to wrestle on the grandest stage of them all, the MO State Tournament.

It was a bitter-sweet ending to the 2021-2022 season for the Festus Varsity Wrestling team. Plagued by injuries and illness, the Tigers struggled to fill out their roster with enough wrestlers to earn a team win. However, even though the team victories didn’t happen often, the individuals still managed to shine bright. In fact, impressively, Festus advanced five grapplers, which included two male and three female competitors, out of their district and into the MO State Tournament.

New Head Coach Jarad Sheppard was complimentary of his team’s performance, and said, “I’m pleased to say our team wrestled hard at the State tournament. Anytime you make it that far and everybody who qualifies wins at least one match is a good thing, and getting to bring home any sort of hardware is always a privilege.”

On the boys’ side, coming in with a 25-11 regular-season record, Austin Neff entered at the 126 lb. weight class. Neff lost his first match, which moved him into the consolation bracket. There, he won his first-round match by decision 4-0, but unfortunately, he was defeated in his next match 7-2.

At the 160 lb. weight class, Peyton Shaver came into the tournament with a 44-8 record. Shaver won his first match 5-1 but lost his next match, which pushed him into the consolation bracket. He then won his round-one match by decision 5-4, but then lost the next match.

Entering first for the Girls team at the 100 lb. weight class was Lee Ann Dobbs, who had an outstanding 26-7 regular-season record. Dobbs won the first match by tie-breaker but lost in the quarterfinals, and the subsequent consolation round. She earned two points for her team.

At 115 lbs., with an excellent 31-4 record, Kirsten Klein won her first match by pin. She then lost her next match but pinned her first two opponents in the consolation bracket. Klein, however, lost in the semifinals, but managed to earn a 9-4 decision in her final match, to finish in fifth place, providing 13 points for her team.

Lastly, Lauren Mills, wrestling at 130 lbs. came into the tournament with an amazing 36-4 record. Mills won a decision in her first match, but lost in the quarterfinals. She then rattled off four wins in a row, including two pins, en route to a third place finish. Mills brought home the Bronze Medal and added 19 team points.

The Tigers battled tough all season, and made an impact with their individual wrestlers. Even with only three entrants, the Festus Girls did manage to earn 34 team points, which landed them in thirteenth place overall, not bad considering there were 108 total teams that entered. Sheppard added, “Overall we had a strong showing and I couldn’t be happier with how everyone performed, especially since none of these wrestlers had ever wrestled at the Mizzou Arena.”

Festus will now take the offseason to heal up, and more importantly recruit younger athletes to try their merits on the mat. With a little luck, the Tigers could become a force to reckon with next season, when October rolls around.