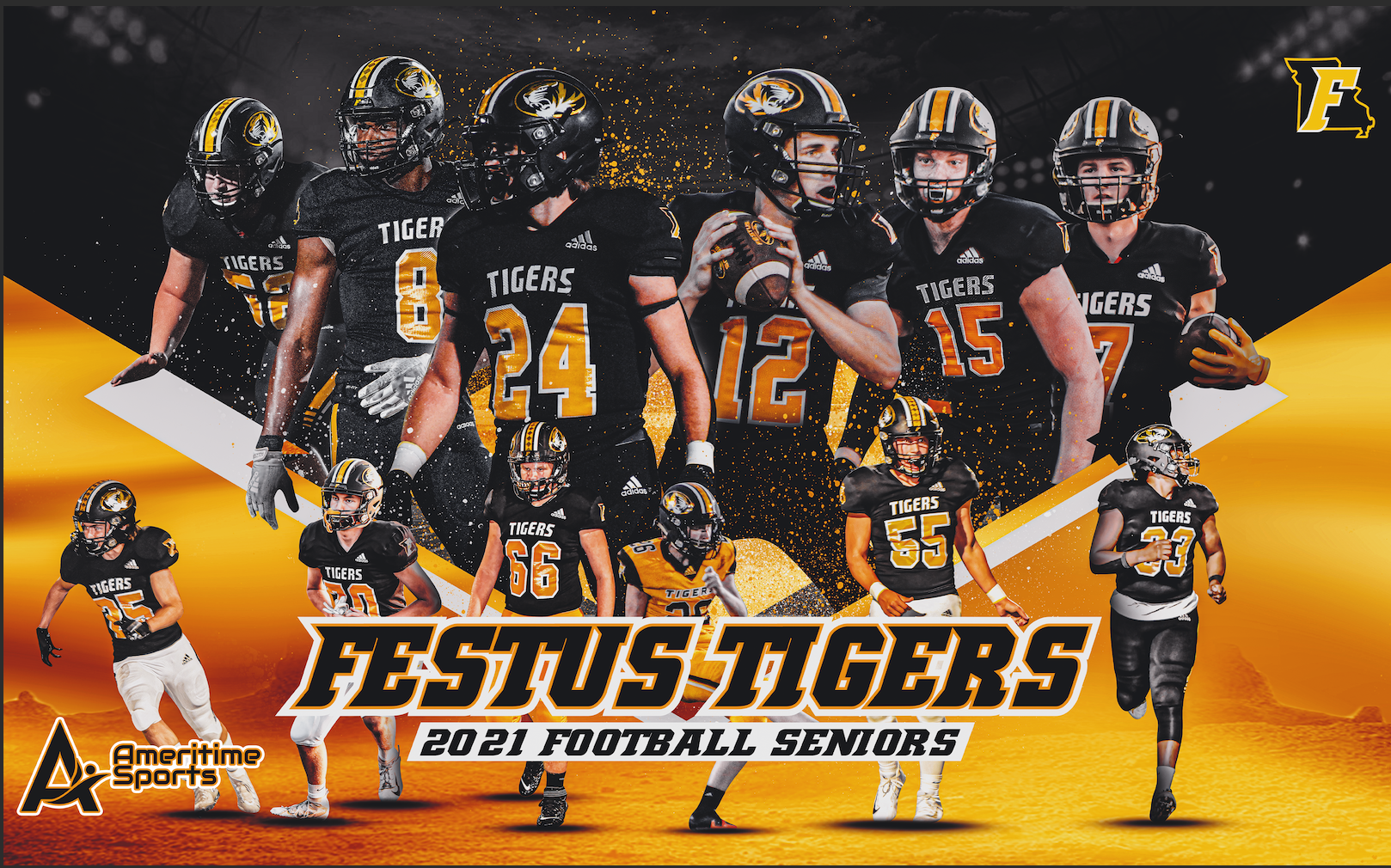 The Festus Tigers have an up and down season, falling in the District Semifinals, but earn 10 All-Conference nods and have plenty to be proud of in 2021.

The 2021 season for the Festus Tigers was a true rollercoaster ride filled with ups and downs, surprising turns and a sudden stop. They managed to make it to the District Semi-Finals, but the ride ended there. It was an interesting season to say the least, and had many bright spots and impressive accomplishments, but came with its fair share of heartbreak as well.

Week one was one of those heartbreakers. The Tigers had their hands full with a revamped Ste. Genevieve team and found themselves trailing most of the game. A big fourth quarter comeback behind QB Cole Rickermann, who had nearly 350 yards passing and five TDs, fell just short and Festus lost on the final play of the game 36-33.

Weeks two and three were much more indicative of the Tigers that Festus fans know and love. A 26-12 win at Sullivan set the stage for a 62-14 beat down of Windsor. Rickermann was once again huge in these contests and routinely found WR Arhmad Branch and new transfer Eric Ruess in the end zone. Stud running back Kaian Roberts-Day finally got involved well, and Festus made some history on the way to their first winning record of the season.

Kicker Emily Holt broke the gender barrier and became the first female athlete to compete on the football field in the history of the program. Her arrival was sudden and brilliant, as she went on to dominate in the kicking game for the rest of the season.

Week four saw the Tigers eat the De Soto Dragons’ lunch, 62-6, as they moved to 3-1 and created a legitimate winning streak. It was all sunny skies in Festus, but storm clouds were on the horizon. In week five they would face crosstown rivals, the Hillsboro Hawks, in the annual Battle for Highway A, but this year to honor the military it was renamed the POW/MIA game. It was a hard fought back-and-forth battle, but with Festus trailing 34-29 and just seconds remaining, a costly goal-line fumble ended the game… and Festus’ winning streak. In a word, heartbreaking.

That trend would continue in week six as the Tigers lost another gut-wrenching fourth quarter, last second game. This time to the eventual District Champion North County Raiders, 41-35. Then the tide turned in week seven as the Tigers mounted a huge fourth quarter comeback and beat the Pacific Indians 35-32 to move to 4-3 on the season.

The following week showcased another last-second fourth-quarter misstep. The 28-20 loss to Farmington was the fourth time this season the Tigers lost a game in the final seconds where they had a chance to tie or win outright. Then in the final regular season game, Festus put it all together and took down St. Charles West 49-7, ending with a winning record heading into the District Playoffs.

The playoffs were a microcosm of the Tigers’ season, as they were filled with domination and then once again heartbreaking defeat. Festus whipped the Sikeston Bulldogs 48-6 in the quarterfinals, but then in the semis they had to roll across town to meet Hillsboro once again. Neither team could really get their offense going, but the Hawks eventually came out on top of the defensive showdown with a narrow 13-7 victory, ultimately ending the Tigers’ season.

That’s not to say there aren’t excellent achievements to focus on, because there are plenty. The Tigers finished 6-5 and outscored their opponents 404 to 229. That’s a point-per-game average of 36.7 for Festus and just 19 for the opposition. In fact, if not for some bad luck and a few hard moments in crunch time with the clock winding down, the Tigers could have realistically won every game this season. Most of their wins were blowouts, but each of their five losses they were within a touchdown. A few things break the other way and we might still be talking about the Tigers in the State Championship Quarterfinals.

Regardless, the chips fall where they may during the season, but the Tigers have a lot to be proud of. They had ten All-Conference achievements and a handful of truly standout players. See below:

So Landen Yates (Defensive Back)

Individually, it comes as no surprise that Rickermann stood out. On top of being named First Team All-Conference, he was also crowned the Conference Offensive Player of the Year. Throwing for 2,651 yards with 27 TDs and just three INTs is a good way to earn that honor. He’s one of the true leaders of this team and was quite versatile in his achievements. He was the third leading rusher on the team with 341 yards and a touchdown and also handled the punting duties. Some college or university out there is going to be very pleased with Mr. Rickermann.

As for his receiving core, Branch had an incredible season with 34 catches for 1,049 yards and 10 touchdowns. Breaking the 1,000-yard barrier in High School is quite the notable achievement. On his heels was Isaac Stucke with 32 grabs for 734 and seven scores, and two-way standout Ruess was excellent as well with 26 catches for 347 yards and five TDs as the Tight End.

On the rushing side of things Landen Bradshaw and Roberts-Day were the big difference makers.The latter led the way with 628 yards on just 59 carries and an impressive 12 TDs, while Bradshaw was the workhorse, toting the rock 91 times for 518 yards and four scores.

Defensively, the big three were Carter Cupp, Eli Ortmann and Ruess, who gave opposing defenses hell this season. Cupp led the team with 88 total tackles (30 of them assisted), had a pair for a loss and snagged an interception, while Ortmann and Ruess were the ones who wreaked havoc on the quarterbacks. Ortmann had 68 total tackles (49 of them solo) and led the team with four sacks. Ruess nipped at his heels with 67 tackles (42 solo) and sacked opposing QBs three times.

The 2021 season may not have been the one that the Tigers dreamed up, but it was certainly a notable and successful one. These talented young men and one young lady laid it all out on the field every Friday and have all the reasons in the world to be tremendously proud.