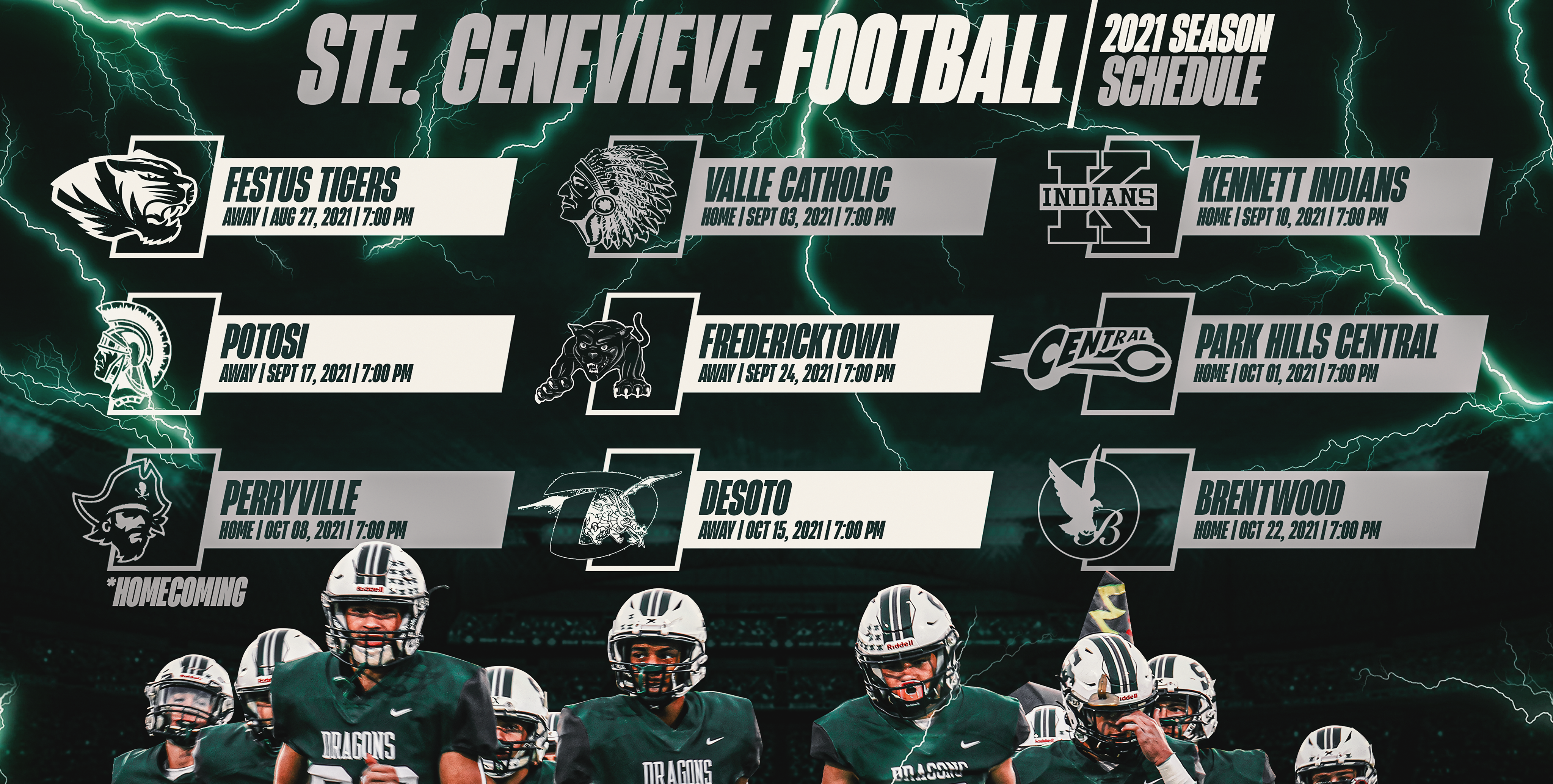 The Ste. Genevieve Dragons have a new Head Coach and are looking to improve on last year’s 4-5 finish. Ameritime Sports dives into the details of their 2021 schedule and expectations.

The 2020 season wasn’t especially kind to the Ste. Genevieve Dragons, as they went just 4-5 on the year.  They lost their first three games to start the season in grand fashion, but found a way to rebound after that.  They found their offensive groove in the next two, putting up 101 total points against Potosi and St. Pius X for their first two wins.  The second half offense was on display, as they scored over 40 points in each of their wins during the year.  Still, the team felt they needed to go in another direction and made a coaching change.  Jay Pope, a former assistant at rival Valle Catholic will be the new Head Coach of the Dragons in 2021.  It’s still a tough schedule this year, but some new blood should certainly give the Dragons a boost. 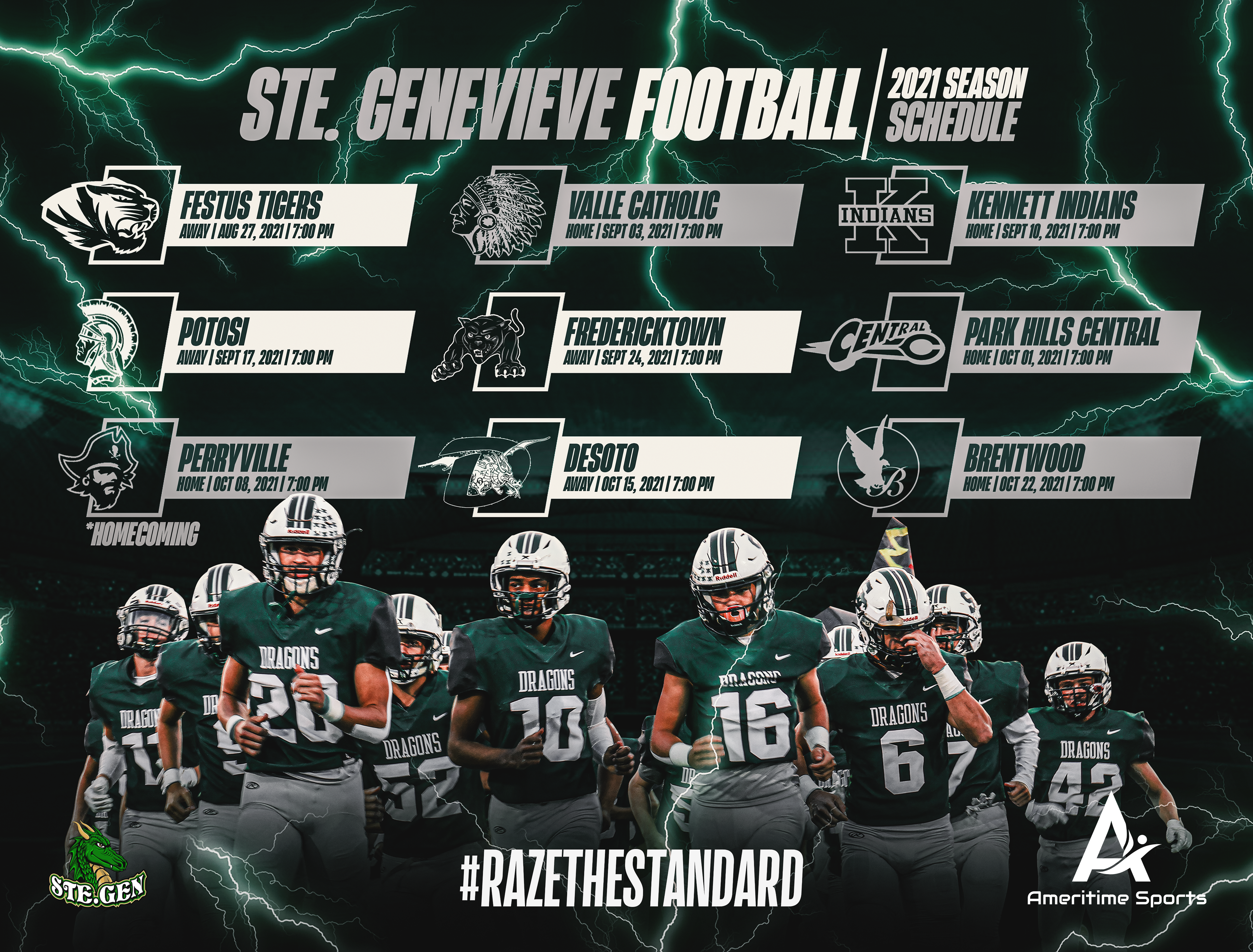 The opening week of the season is a tough one for the Dragons as they travel to take on the Festus Tigers.  Festus went 10-2 last season, including a big Week 1 win over Ste. Gen, who fell 41-13. They will really have to come out firing on all cylinders to take advantage of the losses Festus took with graduating seniors if they want to start the season with a winning record.

Week two doesn’t get any easier as the Dragons have to take on geographical rival Valle Catholic.  There is a long history between the Warriors and the Dragons, and the overall record is nearly even, but Valle has had the better of Ste. Gen recently, winning eight of the last 11 games.  Another early tough test for the Dragons, but hopefully new Head Coach Jay Pope can use some former Valle magic in the Dragons’ favor.

Things certainly don’t get any easier in week three as the Dragons have to take on the prodigious Kennett Indians.  Last season the Indians were 11-1 and were responsible for ending Ste Gen’s season in the State Tournament in 2020.  A historically tough draw, this year won’t be any easier, and the Indians hold a 6-3 record over the last nine meetings of these two clubs.

Finally a favorable matchup.  The Dragons have had recent and storied success against the Potosi Trojans, going 12-2 in their last 14 head-to-head meetings.  Last year the Dragons earned their first win against Potosi in spectacular fashion, taking them down 42-7.  The Trojans had the better overall record last year at 5-5, but the Dragons seem to always give the Trojans fits.

The Central Rebels have been a bugaboo for the Dragons over the last decade or so.  They won a squeaker vs Ste Gen last year, 31-26, and the Dragons are just 5-13 over the last 18 meetings between the two schools.  The Rebels went 8-2 last year and are likely poised for another strong season.  The one thing the Dragons can hang their hat on though is that they were responsible for ending Central’s season in the 2019 State Tournament.  Maybe they can build on that.

The Perryville Pirates are one of the teams that the Dragons have owned in the past.  Ste. Gen has won 13 straight matchups and it’s fair to say the Dragons have had their way with the Pirates. Last year they obliterated Perryville to the tune of a 41-0 shutout victory.  The Pirates were just 3-6 last year and look like chum in a shark tank for a Ste. Gen squad that needs some wins they are “supposed” to get.

Another team that has been burned by the Dragons of Ste. Genevieve are the Dragons of De Soto.  Ste. Gen has won the last eight straight matchups and last beat De Soto in 2019 by a convincing score of 42-7.  They didn’t face each other last year, but De Soto was just 2-7 in 2020 and appears to be a struggling program.

The Dragons close out the regular season against the Brentwood Eagles.  The Eagles were one of the severely victimized Covid teams of 2020 and played their ball in the Spring.  They only managed four games total, but were able to win them all.  They have had their troubles with Ste. Gen though, going just 1-3 over their last four games. The two clubs last met in 2019 and Ste. Gen walked away with a blowout 55-14 win.  A repeat of that would be a great way to close out the regular season.