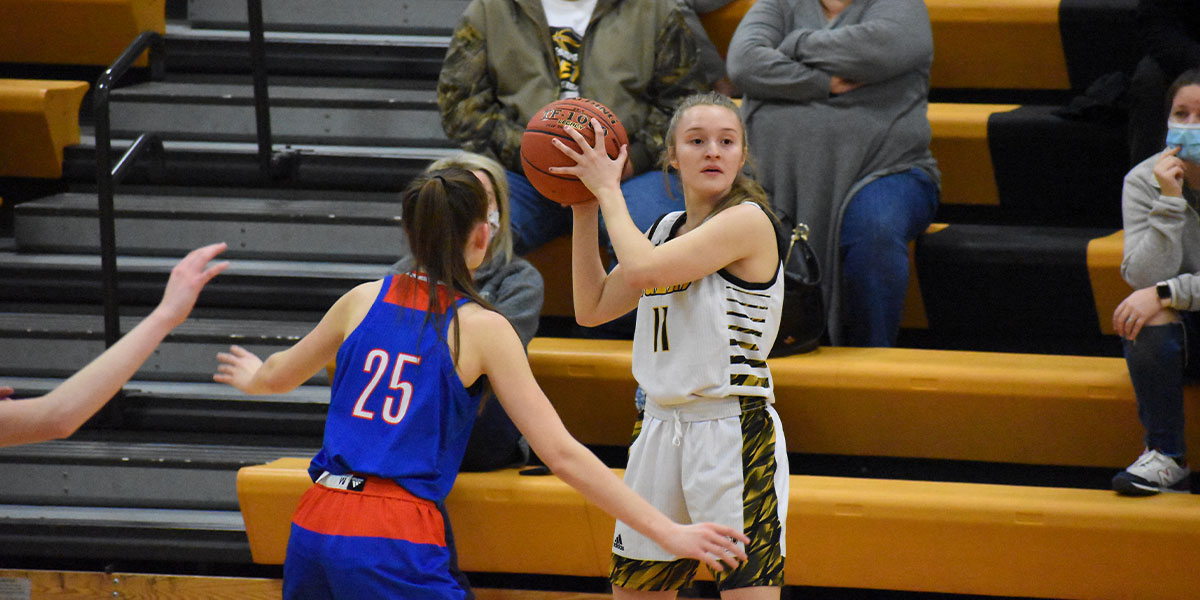 Festus Sneaks Past Pacific, Improves to 8-7

The Festus Varsity Lady Tigers hold off the Pacific Lady Indians 65-59 for their eighth win of the season. They are 2-3 against Pacific since 2016, and are now 8-7 on the season with one game left before the District Tournament.

The Festus Tigers Girls Varsity Basketball team held on to beat the Pacific Lady Indians 65-59 on Monday. The Tigers are 2-3 against Pacific since 2016.

The Tigers came into this game ready to play with fresh legs. They had not played a game since their loss to Hillsboro on Feb. 4th, and they were eager to get back on the court. Festus showed they weren’t rusty in the first quarter when they outscored the Indians 14-13 and held the early advantage.

The Tigers locked in on the defensive end in the second quarter. Pacific could only muster up six points, and Festus took full advantage. The Tigers put up 16 points in the second and extended their lead to 30-19 by halftime.

Pacific was able to make some adjustments at halftime and get back on track in the second half. They scored 16 in the third, but Festus was still able to maintain their lead. The Tigers put up 15 in the quarter and led 45-35 heading into the final eight minutes.

Pacific was not going to go away quietly. They exploded on the offensive end of the floor in the fourth and had their highest scoring quarter of the day with 24 points. However, the Tigers also had their best quarter of the day with 20 points. Festus successfully held off the Indians’ comeback attempt and secured the 65-59 victory and bumped their record over .500 to 8-7.

“We moved the ball very well this game,” Emily Holt said. “We did have some trouble early into the game getting our posts to want the ball more. We finally started moving and were able to make many of our shots. We worked as a team and saw the court well.”

Josie Allen led all scorers with 25 points. She also pulled down nine rebounds, passed out four assists and swiped six steals. Holt and Lily Knickman each put up 12 points. Holt also had four steals, three assists and 11 rebounds which gave her a double-double. Mya Courtois had 11 points and eight rebounds. Tristan Foulk and Samantha Helbrueck had six points combined, all from the free-throw line.

“We stepped up on the defensive end,” Allen said. “Our post players did well rebounding which helped us out big time.”

With the long layoff and the district tournament just around the corner, the Tigers were in need of some meaningful minutes in a real basketball game. They built their lead in the first half and did a solid job of maintaining it to pick up the win. They have one game left before the District Tournament tips off. That game is against Windsor on Thursday, Feb. 25.

Festus Sneaks Past Pacific, Improves to 8-7