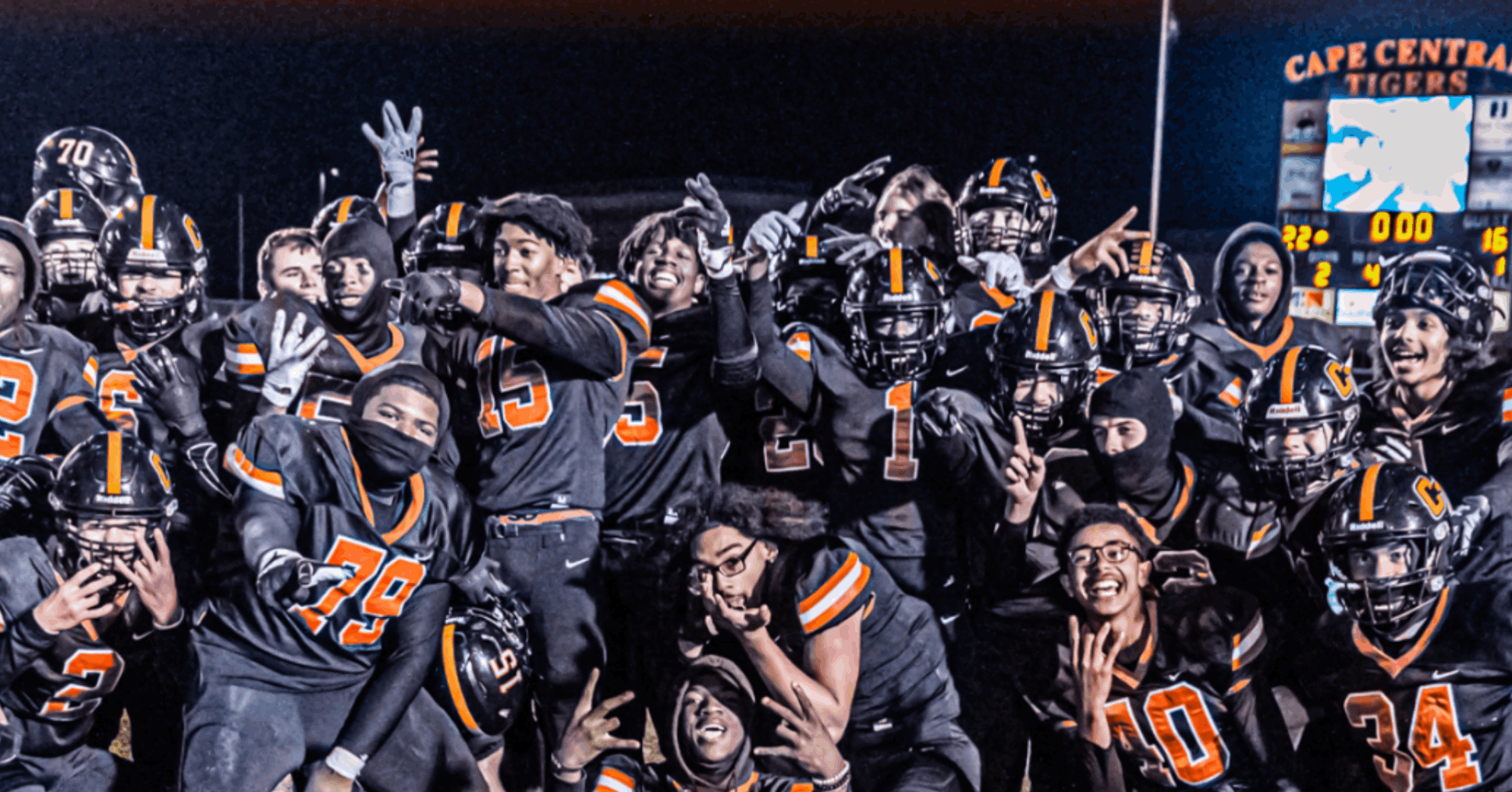 The Cape Central Tigers take down MICDS in a defensive battle that sends them to the State Semifinals.

The Cape Central Tigers went off book in this one and flipped the script, but it worked in a pinch, as they downed the MICDS Rams 14-10 in a defensive showdown on Saturday to advance to the State Semifinals. Two-way standout Clayton McClard had more than a hand in the victory. Details to follow.

The Tigers set the stage for their victory early in the first quarter, taking the opening kickoff and turning it into a 15-play, 80-yard scoring drive that was capped of by a 3-yard Keyshawn Boyd TD run. Cape went for it on fourth and goal, and the wise decision by Head Coach John Gibbs paid off. That would be the sum of all the first quarter scoring, so the Tigers found themselves with a 7-0 lead after 12 minutes of play.

There was more to the drive than just the TD though. QB Morgan Diamond ripped off a 28-yard run and Zai’Aire Thomas cleaned up a McClard fumble after a 12-yard completion. McClard made up for the gaffe though with a 23-yard catch on the next play with a diving effort on a tipped ball that put Cape on the 18 yard line. Coach Gibbs called it “a pure hustle play”.

He followed up with, “the opening drive used up a lot of the first quarter, and also I believe was a confidence builder for our kids.”

After the Tigers held the Rams on the ensuing possession, they failed to convert on a fourth-and-one situation after a long drive, and MICDS got the ball back. They worked their way down the field and eventually scored on a 9-yard TD run to even up the game at 7-all.

The Tigers had fire in their collective bellies though, and weren’t going to let the half expire without a fight. Diamond hooked up with McClard for a huge 44-yard completion to get Cape into the red zone with just 40 seconds remaining on the clock. After a cluster of incompletions they were forced to kick a field goal on 4th-and-3, and the boot sailed through the uprights.

Unfortunately, a questionable chop block penalty was called and the FG was negated. That ended any chance of scoring and the half ticked down with both teams owning seven points.

After the break the Tiger defense stood fast and squashed the Rams’ opening drive. On the followthrough, after getting the ball back at mid-field, Diamond hit Marshon Edwards for a 25-yard gain. The stud QB followed that up with an 11-yard strike to McClard, who secured the ball in the endzone for a 14-7 lead.

The Rams were pumped up after that drive and marched their way down to the 8-yard line, earning a 1st-and-goal. The Tiger defense stood fast though and kept MICDS out of the endzone. They forced a field goal, which was good from 25-yards out and cut the lead to 14-10.

In the final quarter the two teams traded possessions to start, and the Central defense made a big 4th-and-1 stop to get the ball back. Unfortunately, the Tigers threw an interception on their next possession and set up the Rams with quality field position at the 41-yard line.

But the Cape Central defense came to play, and they weren’t going to let this one slip through their fingers. On two of the first three MICDS plays from scrimmage, the Tigers recorded sacks that resulted in 12 and 11 negative yards, respectively. That forced the Rams to punt the ball with just 2:47 remaining in the game.

The Tigers ate as much of the clock as they could with a big first down, but eventually had to punt the ball back to the Rams with a sliver of time remaining on the clock. MICDS had it at the 20 with three seconds left on the clock and the Cape defense forced an incomplete pass that sealed the 14-10 victory.

It was a defensive nail-biter, but the cream rises to the top and the superior defensive squad took this one down.

McClard was a monster in the biggest game of his career, as he led the team with 103 receiving yards and scored the game-winning touchdown. He also had 12 tackles on defense with two going for a loss and registered a pass breakup.

His QB was good for 145 yards and a score on 9-of-18 throwing, and Diamond also rushed the ball 10 times for 46 yards to pace the offense. Not to be outdone on both sides of the ball, he also had eight tackles and a sack in this one.

Thomas led the rushing attack with 73 yards on 13 carries, but was bottled up for the most part in this defensive standoff.

The Tigers couldn’t have pulled off the victory though if it wasn’t for Gavin Pittman and Davarious Nunley on defense. Pittman led the team with 15 tackles (two for a loss) and had a key sack and a pass break-up, while Nunley had 14 takedowns with two of those going for a loss.

Coach Gibbs spoke to the grit and hard-nosed quality of the game, saying, “this was a really good, tough, physical game. Both teams played hard with few penalties. Really a great team effort against a good football team.”

The Tigers have now won eight games in a row and are headed to the State Semifinals. They get to host the next game on Saturday at 1pm against Fort Osage with a trip to the finals on the line. It’s going to be a wild one, so get your rest, eat your vegetables and head down to Cape on Saturday for the game.