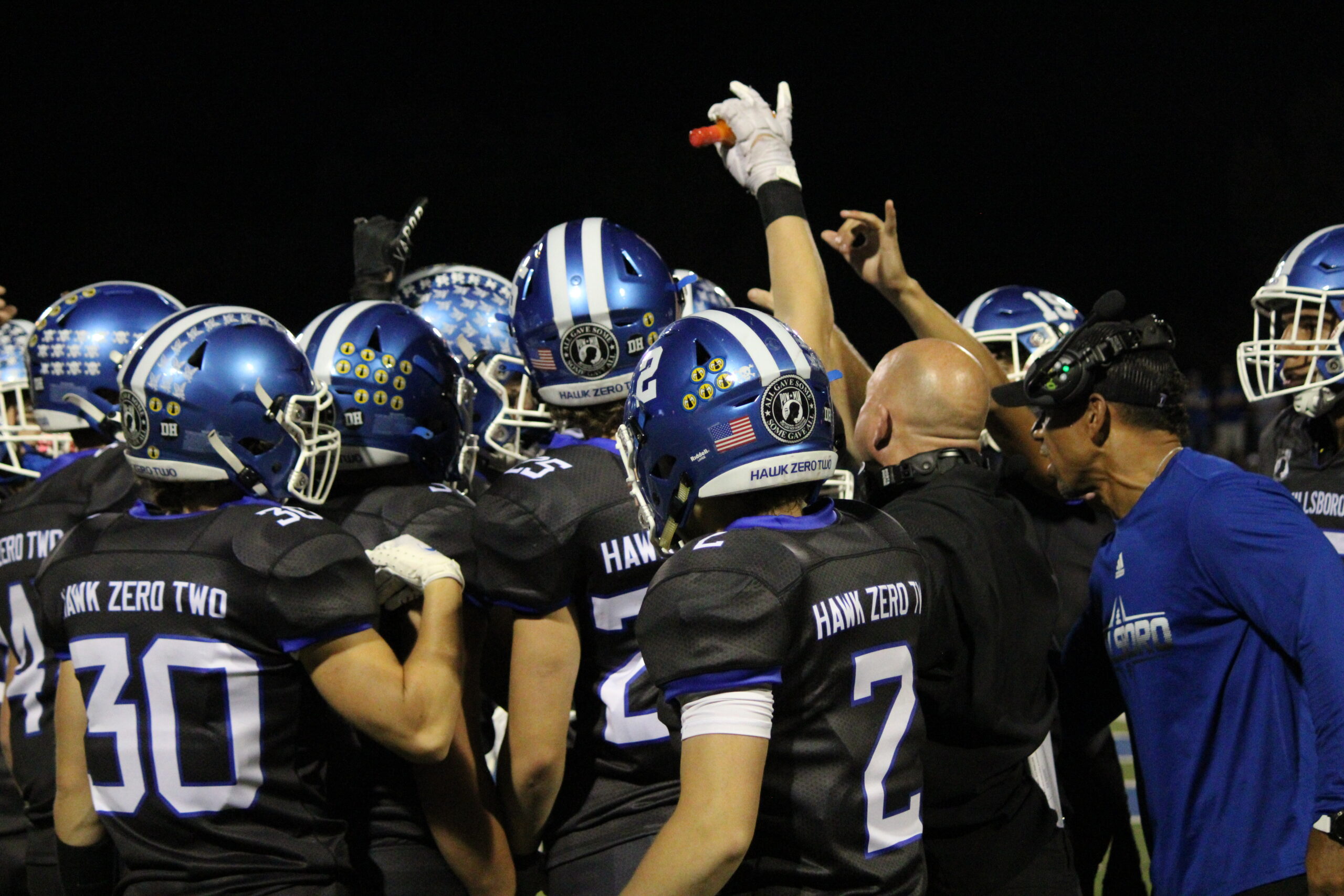 The Hillsboro Hawks saw a halftime lead evaporate in the Class 4 State Quarterfinals against the defending Class 3 State Champs in St. Mary’s.

Hillsboro’s impressive 2022 season came to a sudden end Saturday after St. Mary’s put on a remarkable second half comeback that featured big play after big play.

With the win, the Dragons advanced to the Class 4 State Semifinals while the Hawks concluded a dominant campaign with a record of ten wins and two losses.

Things started well for the visitors from Jefferson County when just 3:44 into the game, Austin Romaine caught a four-yard touchdown pass from quarterback Preston Brown. Nick Marchetti added the extra point to make it 7-0.

It took just 1:16 for St. Mary’s to answer when quarterback David Leonard connected on a 40-yard scoring strike to Farand Washington. Robert Schillinger III added the point after to tie the game 7-7 at the 7:00 mark of the first quarter.

The Dragons took their first lead of the game with 4:03 left in the opening period when Leonard tossed a 23-yard touchdown pass to Chase Hendricks. The PAT made it 14-7.

But the rest of the first half belonged to the Hawks.

With 10:29 left in the first half, Jaxin Patterson raced to the end zone from 39 yards out. Marchetti nailed the extra point to tie the game 14-14.

Hillsboro took the lead it would eventually take into the locker room at the 7:17 mark when Romaine crossed the goal line on a 28-yard run. The extra point failed and it was 20-14 at halftime.

But the defending Class 3 State Champions showed their mettle almost immediately to start the third quarter.

A mere 18 seconds into the second half, Jamal Roberts did what he does about as well as anyone in the region this season and that’s find the end zone. He ran it to the house from 76 yards out to tie the score for the third time. A failed PAT ensured the score would remain tied, at least for a moment.

Roberts started to take control 1:25 later when he scored again, this time from four yards away. Another failed PAT kept the score 26-20 in favor of the Dragons.

Roberts was not done in the third quarter when he scored again from the four-yard line at the 5:51 mark. The two-point conversion was good on a run from Leonard to make it 34-20. The three straight rushing touchdowns for Roberts gives him 25 on the season on just 137 attempts. If you look up big play running back in the dictionary, you may see this young man’s picture. To go along with the incredible touchdown production, he has now amassed 1,666 yards for the season.

Hillsboro was not going to go quietly after the barrage by the Dragons though. The Hawks scored a critical touchdown with just 48 seconds left in the quarter on a three-yard pass from Brown to Nick Doerner. The extra point made it 34-27 heading to a wild fourth quarter.

The Hawks made it all the way back at the 9:25 mark when Patterson scored his second rushing touchdown of the game. This one for three yards. The PAT tied it 34-34.

Unfortunately for the Hawks, St. Mary’s assumed control the rest of the way.

On the ensuing kickoff, Hendricks returned it 89 yards for what proved to be the decisive touchdown. The point after made it 41-34 with 9:09 remaining.

If Hillsboro had plans on another comeback, they were effectively dashed when Kaliel Boyd picked off Brown’s pass and returned it for a score. It was Boyd’s ninth interception of the season. The kick made it 48-34 with 7:42 left. The Hawks committed five turnovers on the day.

The Dragons put the icing on their cake three minutes later when Leonard connected with Hendricks on a backbreaking 59-yard touchdown pass with just 4:41 to go. The kick made the final 55-34.

The Hawks ran 13 more plays during the game, but it was the big play that did them in as St. Mary’s produced 512 total yards on 50 snaps. That’s a whopping 10.2 yards per play. Hillsboro finished with 259 total yards.

“Kids played hard and we had it tied in the fourth, but just could not finish,” said Hillsboro Head Coach Bill Sucharski. “Really proud of our kids on an outstanding season.”

Team success is usually built on outstanding individual performances and Hillsboro had plenty of those this season.

Romaine and Patterson both finished with over 1,000 yards rushing and they combined for 35 touchdowns. Romaine had 19 and Patterson 16. Payton Brown added 839 yards on the ground and another 13 scores. Preston Brown chipped in with 697 yards and eight scores of his own. As a team, the Hawks compiled an impressive 64 rushing touchdowns from eight different players.

Preston Brown was efficient in the passing game with 849 yards and 13 touchdowns with just three interceptions. Blake Larson was on the end of four of those scoring strikes and Dalton Ross caught three.

These are the key skilled position contributors to an offense that averaged just under 49 points per game. Of course, I am sure these young men would credit their offensive line for helping them put up such prolific numbers.

The defense allowed just under 15 ppg. Romaine led some of the key statistical categories on this side of the ball as well with 117 total tackles. He was second with seven sacks and 22 tackles for loss. His running mate, Alex Medina led the team with nine sacks and 25 stops behind the line of scrimmage. Canyon Stout led the way in takeaways with six interceptions.

This was a team that has to say goodbye to 16 seniors, but the future is still bright, especially considering the quarterback Preston Brown is just a sophomore and one of the top rushers, Payton Brown, and a top receiver in Ross have another year of eligibility.

The Hawks have a lot to be proud of with a 10-2 season against a challenging schedule that featured three teams still alive in the MSHSAA playoffs. They own a win over Class 5 Semifinalist Cape Girardeau Central and losses to Class 3 Semifinalist Cardinal Ritter and of course to St. Mary’s.

By winning 19 of 23 games the past two seasons, Hillsboro seems to be regaining the magic that led the program to seven consecutive winning seasons from 2011 to 2017.

Congrats to the Hawks on an incredible 2022 campaign.