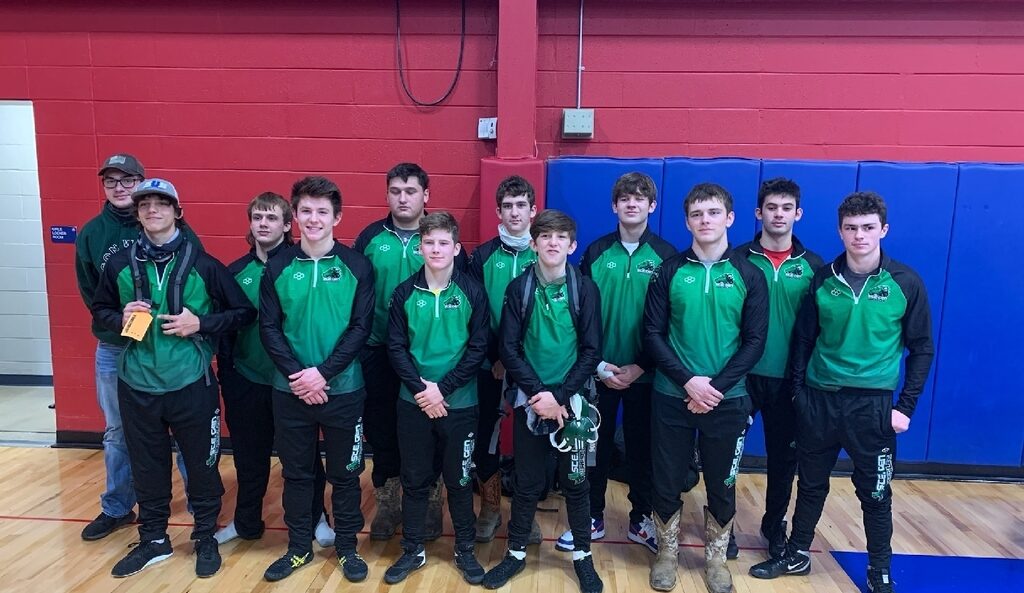 Both the Ste. Genevieve Dragons Girls and Boys Varsity Wrestling Teams compete in tournaments over the weekend and perform admirably. Maggie Myracle earned another gold medal in the Cape Central Tiger Classic, while the Boys team went 2-3 in the Moberly Duals.

It was a typical weekend in December for the Ste. Genevieve wrestlers, as they practiced all week in preparation for the tournaments on Friday and Saturday. The girls headed to Cape Central, while the Boys drove to Moberly, to meet their respective opposition.

On Friday, December 18, the Ste. Genevieve Girls Varsity Wrestling Team entered two wrestlers into the Cape Central Tiger Classic. The team has been plagued by injuries, but the two Dragon grapplers represented their school admirably. Head Coach Jared Bonnell stated, “We have a couple of girls that are banged up right now, and it was better to rest them at this time instead of risking further injury.”

Isabel Basler wrestled at 127 and went 2-3 on the day, good for fourth place in the tournament. She pinned her first opponent in 1:34, and took only 26 seconds to pin her second. Bonnell was complimentary of Basler, and said, “Izzy is performing well. I have to remind myself that she is only a second-year wrestler, even though at times it seems like she has wrestled for years. She has an impressive work ethic and I know she will continue to make improvements as the season progresses. She has placed in all the tournaments she has wrestled, so she is definitely doing something right.”

Maggie Myracle had an incredible tournament, sweeping her bracket, pinning all of her opponents. She went 5-0 on the day, and took home the gold medal. “Before a tournament, my stomach gets all twisted and I get so anxious. After the tournament is done it’s a big relief,” said Myracle.

Bonnell commented on Myracle, “She is on a mission! She was extremely sick late last year during the State Tournament and now feels a sense of redemption. I can’t blame her after being undefeated all last year and then losing only two matches all year at the State Tournament. Not to mention having pinned the girl who won State twice during the regular season. She’s got a little bit of a chip on her shoulder to say the least. She’s determined to finish what she started.”

The next day, Saturday, December 19, Moberly High School hosted its annual duals wrestling tournament, and the Ste. Genevieve Boys Varsity Wrestling Team was primed and ready for battle. The Dragons competed in five different dual meets, and came home with a 2-3 record. The Dragons were victorious over St. James and Moberly, but lost to Bolivar, Cameron and Pleasant Hill.

Bonnell overall was satisfied with the results, and said, “It was a great test for our team. I knew going into the tournament that we were going to be matched up with several tough schools. It’s important for our kids to get those tough matches, so that they get acclimated to that type of wrestling before we reach the State Tournament. I was pleased with how we wrestled despite going 2-3 on the day.”

In the first dual against Bolivar, Ste. Gen was defeated 52-22. Dalton McNeal, Nathan Selby and Ethan Ogden all were victorious. McNeal pinned his opponent at 4:26, Selby won a major decision 14-2 and Ogden also pinned his foe, at 3:34.

Myracle commented on his teams’ grit, “My team and I were hard-nosed and wrestled tough. Personally, I just need to move more in my matches.”

Ogden then won a decision 6-0, while Gage Gross won by technical fall 17-1. Elijah Holifield was next and pinned his opponent in 1:44. Holified mentioned staying focused, “All day I just think about what I will do in the upcoming match. Even if I lose, I just think about what I did wrong and try and correct it so as to not make the same mistake. Then I immediately start thinking about the next match.”

The Dragons then lost to Pleasant Hill 50-18, winning three matches. Gavin Gross pinned his opponent in 1:57, Ogden won another decision 6-0 and Ryan Schmelzle had a decision 4-2 victory.

Ste. Gen then turned it around in grand fashion against St. James, winning 60-12, and rattling off seven pins in a row.  Justin Schwent started it off and pinned his opponent in 3:18. Schwent, who was nursing a back injury last weekend, said, “This weekend my back felt great and we had good competition. I had a great time at Moberly. Our team just needs to work on a couple of different positions and moves in order to improve.”

Gavin Gross then earned a fast pin in 51 seconds. Selby also pinned his opponent in 1:59. Levi Wiegand earned a pin in 2:39. Next, Kaleb Myracle won with an impressive 15 second pin. Ogden kept the pin streak alive with another one at 1:33. Holifield also pinned his opposition… at the 1:33 mark as well.

The Dragons finished their day with a 42-32 win over Moberly, featuring six wins that included four more pins. Gage Gross, still undefeated on the season, won by pin at 2:33. Bryant Schwent took 3:56 to earn the pin, while McNeal got back in the win column with a pin at 1:32.

Gavin Gross earned another pin at 1:03 and shortly after Wiegand eked out a 6-5 decision. Then Ogden, who seems to be improving every tournament, won a 4-0 decision. Lastly, Holifield dispatched of his opponent by pin at 47 seconds.

Bonnell summed it up, “We had a lot of quality matches. This tournament has given us some solid points of emphasis to address during the holiday break.”

Up next, the Junior Varsity squad will be in action Monday, December 28, in the Cape Central Tournament. The Varsity teams will have a break from competition until Wednesday, January 6, when the team travels to Hillsboro. Until then, the teams will continue to practice and improve their technique and conditioning, while maintaining a championship level of focus.