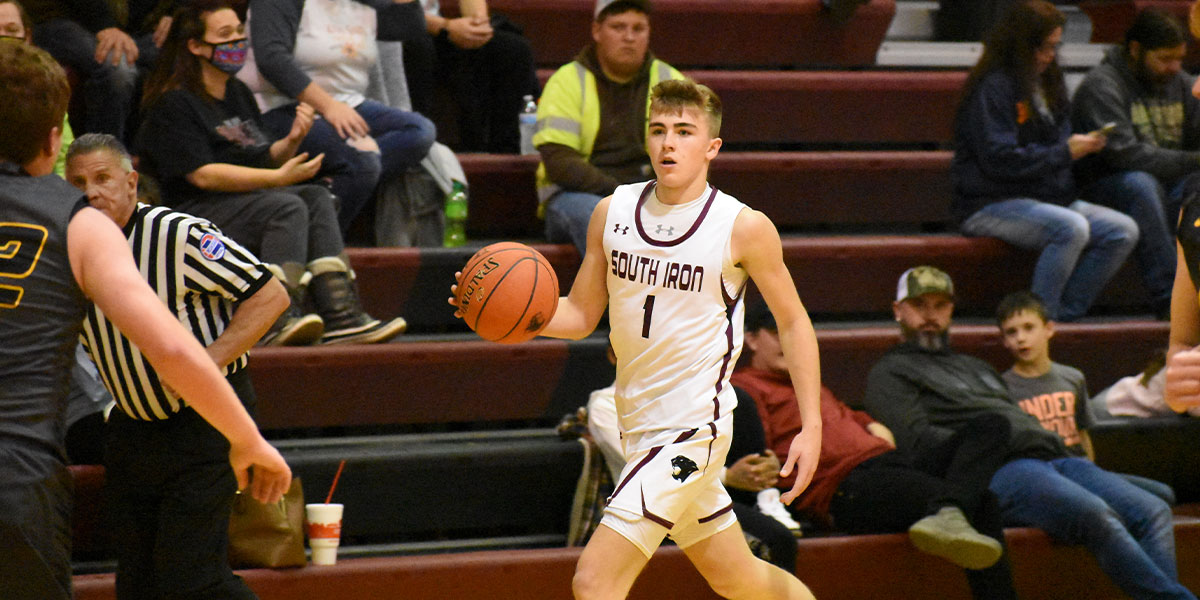 The South Iron Panthers beat the Arcadia Valley Tigers 106 to 48 on Tuesday. The Panthers have won their last four meetings with the Tigers and haven’t lost to them since 2017.

The South Iron Panthers boys’ varsity squad blew past the Arcadia Valley Tigers 106 to 48 on Tuesday. The Panthers won the last four meetings with the Tigers and are 15 and 5 against them all-time.

South Iron came into Tuesday hoping they could bounce back from their first loss of the season and only their second loss in the last calendar year. South Iron attacked relentlessly from the moment the ball was tipped off. The Panthers applied a suffocating press that the Tigers couldn’t break.

“We like to get up in the passing lanes, put pressure and just create havoc. ” Drenin Dinkins said. “That leads to steals and transition buckets for us.”

South Iron forced turnovers and scored off them at will. The Tigers struggled to get the ball past half court. They did not register a point until the final minutes of the quarter. South Iron was ahead 38 to 5 after one quarter.

Arcadia had a bit more luck offensively in the second but still could not stop the Panthers’ offensive attack. South Iron poured in 27 more points and outscored the Tigers 27 to 12 in the quarter. They held a 65 to 17 lead at halftime.

The second half saw more of the same from both sides. South Iron ended the press to conserve energy and focus on defensive execution in the half-court. They kept the pressure on Arcadia throughout the third quarter. The Panthers took a 93 to 29 lead into the fourth. The starters were able to get some rest in the fourth while the bench wrapped things up. The Tigers did win the quarter 19 to 13, but it didn’t matter. The Panthers won 106 to 48 and secured their fifth win of the season.

“We have a lot of players that can create their own shot off the dribble and create for others.” Brock Wakefield said about his team’s offensive success. “It makes it easy when we can find open teammates and they knock down shots.”

Tuesday’s win put the Panthers’ record at 5 and 1. As the season moves on, the opponents grow tougher. The next two games on South Iron’s schedule will provide a real test for the Panthers.  They are going on a two-hour bus ride to Vashon on Saturday, Dec. 19 to play the Wolverines at 2:30 pm.