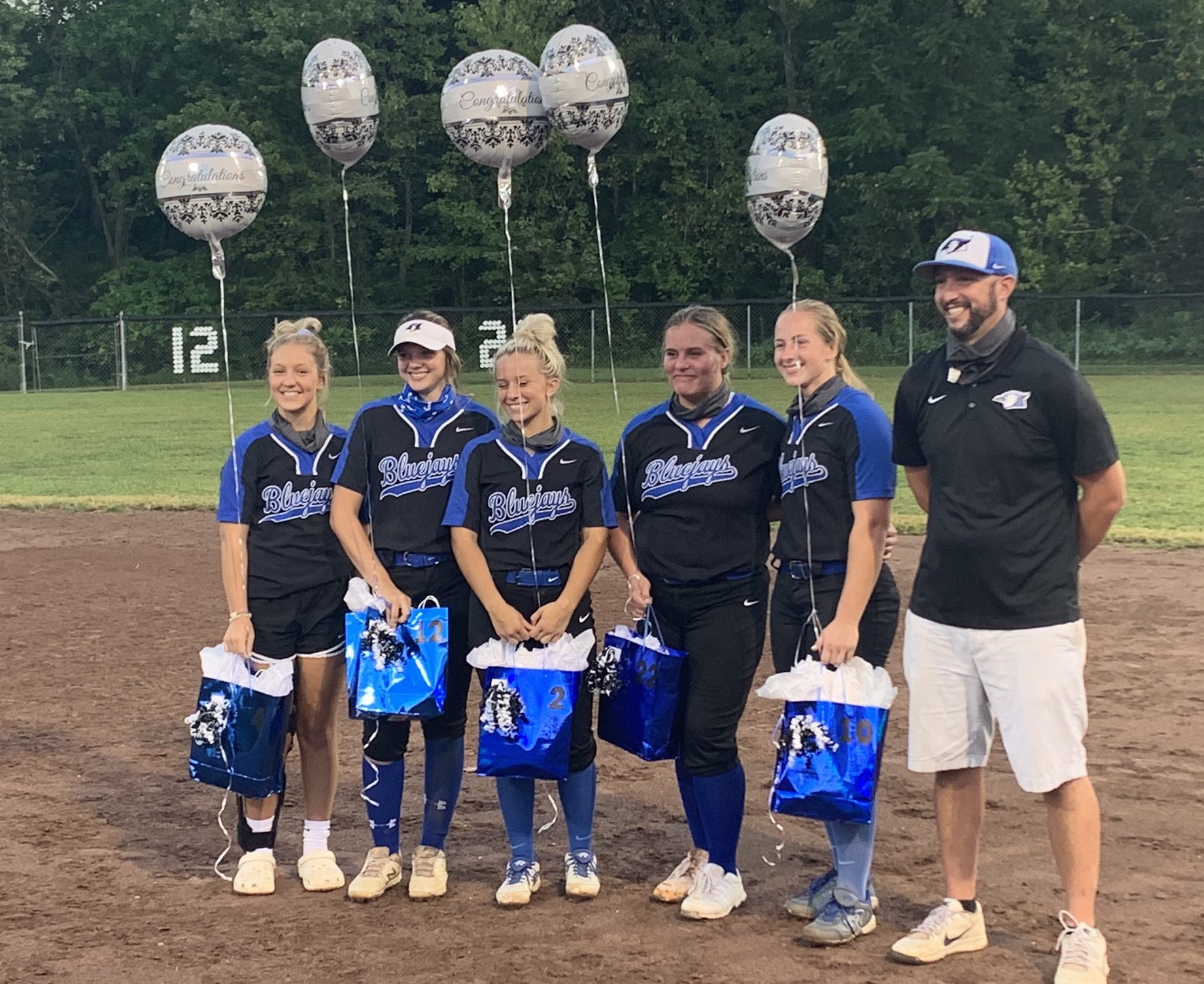 There’s nothing like opening your season and honoring your seniors with a 16-run victory. That’s what happened for the Jefferson Blue Jays varsity softball team on Monday at home.

This year has been uncertain, to say the least.  That’s why most schools are holding their senior nights so early in the season.  The Jefferson varsity softball team is no different, but there was a little more uncertainty added to Monday’s season opener…the weather.  But the Blue Jays weathered the storm, pushed game time back a little bit, and gave five seniors the celebration they deserved.  Jefferson downed Fredericktown 17-1 to start the season with a bang.

“We had a lot of girls play very well tonight,” head coach Robert Kuehnle said after the game.  “Megan Payne threw it well, striking out nine in four innings.  The line up, up and down, struck the ball well, and we pulled away with the 17-1 victory.  I can’t ask for much more on senior night.”

A nine-run first inning pretty much put an end to any suspense about the outcome of the game.  Fifteen batters came to the plate for the Jays, using hits from Morgan Figliolo, Brittany Bittick, and Allison Campbell, several hit batters, and a couple of errors to put the game out of reach.

There’s no doubt the Blackcats helped the Jays’ cause, but a staple for the Jays, for years, has been to put pressure on the opponent and its defense.  Jefferson added five runs in the second and three runs in the third to end the contest early.  Figliolo and Bittick ended the night with two hits each, and Chloe Vaughn, Cami Menke, and Campbell had one apiece.  Payne pitched four innings allowing just two hits.

But Monday was all about the seniors.  Catryn Cattoor, Maggie Brunke, Sydney Stewart, Bittick, and Payne each began their final season with Jefferson.  And each had something to say about their experience.

Catryn Cattoor—”This team and this season are so important to me.  Tonight’s game was such a great start, and I’m really thankful for everyone that made this night so special for me and my teammates.”

Maggie Brunke—”I was just really glad we had the opportunity to get our senior night in.  It meant a lot to all of us!  I thought we played really well especially in hitting.  We had a lot of great hits.  Pitching was also on point, and the defense was there when we needed it.”

Sydney Stewart is injured and likely won’t be able to play her final season for Jefferson.  She did get to start the game and was in

the outfield for one pitch.  She then exited the field one final time.

“Even though this season has been a little different than normal, it means the world to me that I was able to start for one pitch because I am out for the season due to my meniscus tear.  It shows Coach Kuehnle cares a lot about his seniors!”

Brittany Bittick—”I’m so grateful to have had a senior night.  I felt that since it was in the beginning of the season, it didn’t really feel like a goodbye or a sad feeling of our season ending.  It felt more like a celebration, like a welcome to the seniors.  I’ve always played softball, and I grew up with these girls. There is absolutely no other group of seniors like us.  These past four years of Jefferson softball have been a blast.  I remember saying goodbye to the seniors every year, and I thought it would be so hard to be the one on the other side. However, that was not the case.  Our team has such a bond with each other that we are always in touch and supportive of each other, even after graduation.  And as much as I wish I was on the field again with some of my old teammates, I know that I have a new group every year to make memories with too.  So far, we have learned to play every game like it could be our last, to cherish the moment, and have hope to see another game.”

Megan Payne—”My senior night meant that this will sadly be the last year that I get to spend with Cattoor and my other teammates.  That next year, I won’t be here…and that will be, and is, the toughest thing ever.  I remember when I came from Pius, and I really didn’t know anybody.  I was scared, and they took me in and didn’t judge me, and that was the best thing ever for me.  But at the same time, it means that no matter what, they will always be family to me.”

The Blue Jays will continue their 2020 journey on Friday, as the team has picked up a game at Herky beginning at 4 p.m.