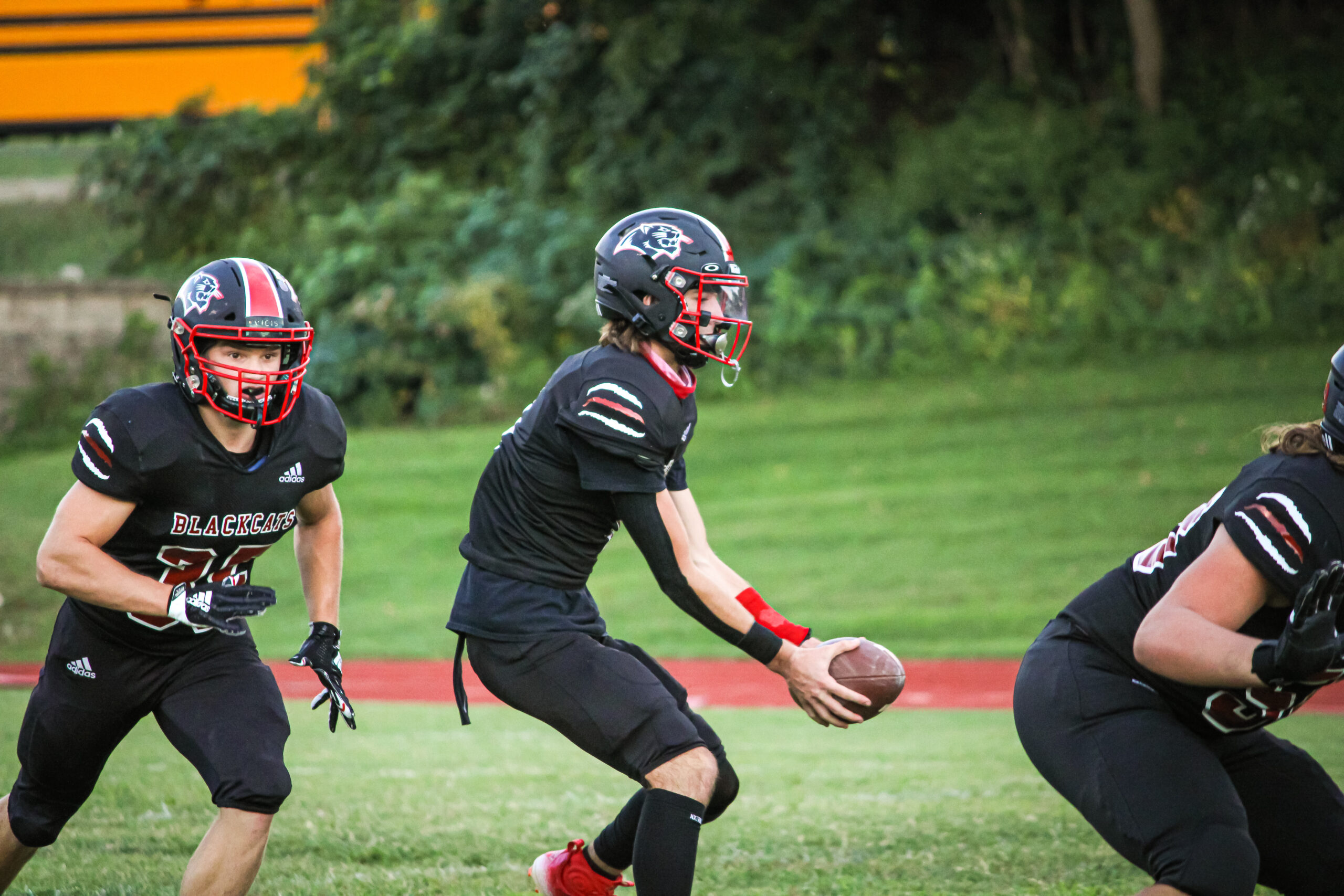 Herky Gets Big Win Over Bayless on Senior Night

The Herculaneum Blackcats flex their muscles against the Bayless Bronchos on Senior Night to move to 5-2.

The Herculaneum Blackcats celebrated Senior Night in style on Friday as they hosted the Bayless Bronchos, and the home crowd could not have witnessed a more dominant all-around effort. The Cats absolutely dismantled the Bronchos with a seemingly endless series of big plays on offense and defense en route to a 44-6 victory that pushed their record to 5-2 on the season.

The big names were on display in this one as QB Jackson Dearing was responsible for five total touchdowns and WR Lucas Bahr had over 200 all purpose yards and a pair of TDs. The Blackcats led from the jump and never looked back in the dominant victory.

Dearing was at it again in the second quarter as he found defensive standout Mike Moloney on a 16-yard pass to extend the lead to 22-0. On the ensuing drive, the Bronchos made their way down the field, but Herky forced the ball free and Dearing was Johnny on the Spot and pulled off the scoop and score from eight yards out. He then hooked up with Luke Liles on a 20-yard passing TD to close out the half and put the Blackcats up 38-0.

The second half was much less eventful, as Herky took their foot off the gas a bit, but the third quarter was highlighted by an incredible 78-yard run for a touchdown by Bahr. Bayless finally got on the board in the fourth with a 1-yard run, but that was all she wrote. The final score was 44-6 and Herky had successfully ripped off their second consecutive victory, outscoring their last two opponents 90-6.

Dearing was the big star in this one, going 10-of-12 for 232 yards and four TDs through the air, and he tacked on the fumble recovery for a TD as well. Bahr had 125 yards and a score on just three receptions, and also rushed four times for 85 yards and a touchdown.

Moloney and Meyers were a huge impact on both sides of the ball in this one. Moloney led the team with seven total tackles and also caught three passes for 19 yards and a score, while rushing for an additional 35 yards on nine carries. Meyers was responsible for three of the four Herky turnovers, as he picked off three Bayless passes and also had 56 yards and a TD through the air.

Head Coach Blane Boss was pleased with the overall effort, saying, “It was a very good team effort on defense, similar to last week. Offensively we relied on some chunk plays in the run game and some big plays in the pass game. Our offense had some lineman shuffled around in different spots, so we could have minimized our blocking miscues and had more success with the run game. At the end of the day I was happy our Seniors were able to experience a win on Senior Night.”

This was a statement game for the Blackcats, who are now looking solid at 5-2 on the season. This was their final home game though, so they will have to gear up for Districts on the road. They travel to Perryville next week and will take on a struggling 2-5 Pirates squad.

Herky Gets Big Win Over Bayless on Senior Night