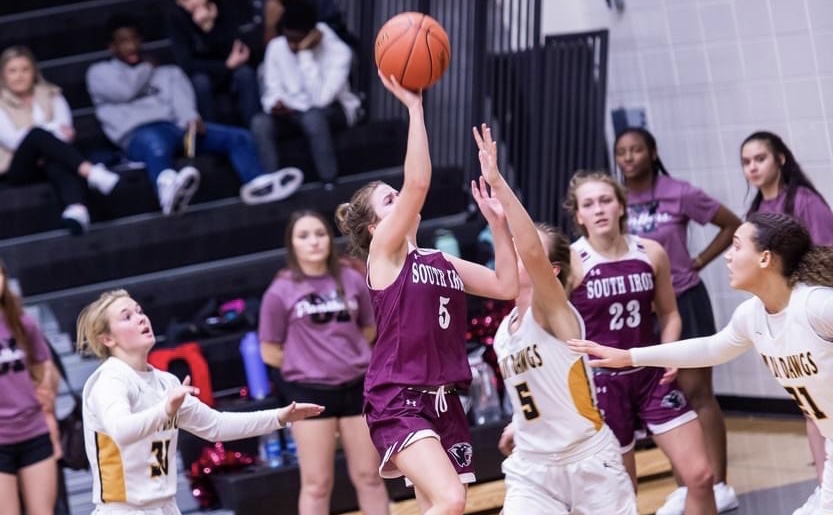 The South Iron Lady Panthers win their 12th in a row and will coast into the Black River League Tournament next week as the top seed.

The 14-1 Lady Panthers of South Iron are on cruise control. Tuesday they traveled to Van Buren and easily dispatched of the Lady Dawgs 75-42 to boost their winning streak to a cool dozen. It was the girls’ only contest this week, so they will get some time to rest and also fine-tune their game before the Black River League Tournament next week, where they will be the number one seed.

The game against Van Buren was like so many others this season, and can be described in just two words. Not fair. The Panthers were all over the Dawgs from the jump and busted out with a 20-9 first-quarter lead. Anna Parker set the tone with with a pair from beyond the arc and 10 points, and the girls hit four threes in the frame overall.

The Dawgs did show some moxie in the second quarter, but it wouldn’t be enough to close the gap. In fact, despite their best effort of the game, South Iron still outscored them 18-16. Parker was huge again with another pair from downtown and eight points. Enzley Dinkins made three buckets and Madison Ayers had four points in the frame. That gave the Panthers a comfortable 38-25 lead at the half.

Despite the big lead, South Iron came out gunning after the break and poured in 27 points, while holding Van Buren to just 10. Ayers blew up with 11 points and Parker hit another pair of threes. With the game all but over at this point, the Panthers rolled into the fourth with a commanding 65-35 lead.

The final eight minutes of play were pretty uneventful, as the Panthers slowed the pace and chewed up the clock. The defense stood tall though and held the Dawgs to just seven, squashing any hopes of a miracle comeback for the home team. At the final buzzer South Iron had themselves a 75-42 victory and 12 consecutive wins.

The dynamic duo of Parker and Ayers were unstable in this one. Parker had 26 points to lead all scorers and drained a whopping six three-pointers, while Ayers put up 24 of her own, nailed a pair of treys and went 6-for-10 at the line. Dinkins had 13 points on six buckets and Allecia Cornell hit three from beyond the arc.

The outside shooting game was on point in this one, with the girls combining for 12 makes from downtown, and the defense was as smothering as ever. It was yet another classically-executed South Iron performance.

Ayers also hit some milestones in this one. Her efforts put her over 1,650 points, 550 steals and 500 assists in her illustrious High School career. She has been a stalwart from the moment she stepped on the court and will most certainly go down as one of the most celebrated and exceptional athletes in South Iron Panthers history.

Now the Lady Panthers will put it in neutral until next week’s all-important Black River League Tournament.