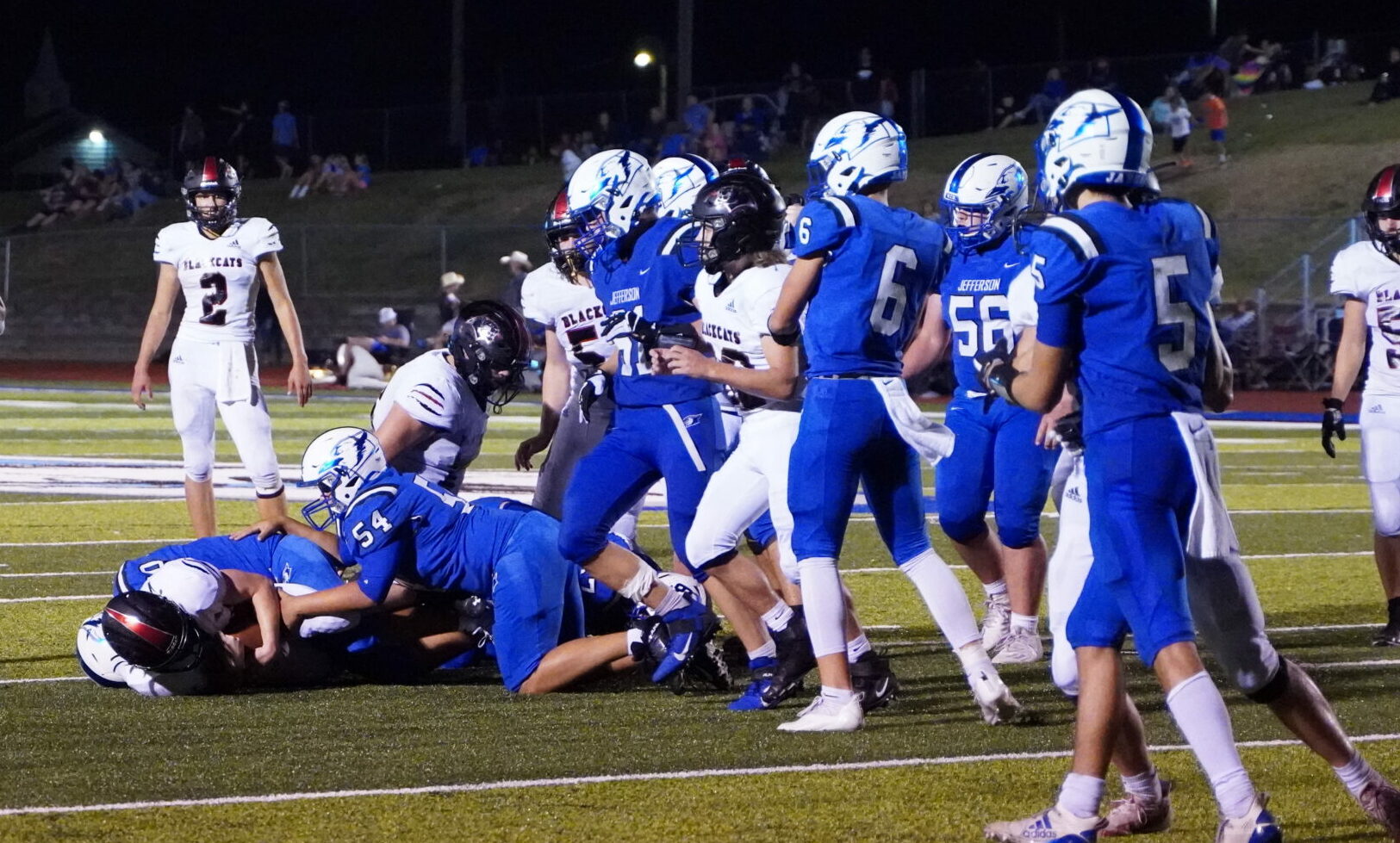 TheJefferson Blue Jays Varsity Football squad holds nothing back as they continue to dominate, winning 48-14 over the Black Cats to stay undefeated at 3-0.

Head Coach Alex Rouggly was thrilled with the Blue Jays’ performance, and said, “We are really proud of the way that our kids came out and played against a very tough Herculaneum football team. Our kids are playing selfless team football and understand that for us to be able to succeed we must continue to do so.”

The Blue Jays wasted very little time, handing the ball to Robbie Hurley to take it in for the first touchdown of the game at 9:26 of the opening quarter, giving the team an early 7-0 lead. That score would stand for a while as it wasn’t until quarter two when the Blue Jays really got rolling.

In the second quarter, Sam Stokes took a handoff 14 yards in for a touchdown, spreading the lead to 14. However, Herculaneum answered back two minutes later, scoring a touchdown and adding a two-point conversion to make the score 14-8.

Two minutes after that, Gavin Theodoro had a 24-yard carry to put up another seven points for the Blue Jays, making it 21-8.

Shortly after, Jefferson got the ball back and scored another touchdown. This time it was quarterback Drew Breeze connecting with Stokes on a 15-yard pass to make the score 28-7 after one-half of play.

It was all Blue Jays in the third quarter, including a defensive touchdown. Colton Richardson scooped and scored on a fumble, taking the ball 24 yards in to tack on another seven.

The next touchdown came on a Richardson pass to Will Breeze from four yards out to extend the lead even further. The two-point conversion try failed, making the score now 41-8.

In the final quarter, D. Breeze found Richardson for an 11-yard touchdown pass to add on the final seven points. Herculaneum eventually scored again with two seconds remaining to make the final score 48-14.

The Blue Jays were successful both in the air and on the ground. “Our passing game was on this evening along with a very solid defensive performance. We have to clean up some penalty issues in order for us to excel against very good programs. The great thing is that it is a fixable issue,” said Rouggly.

D. Breeze threw for 231 yards, completing 14 of 20 attempts, including two touchdowns. Richardson had one completion for four yards and a touchdown, and also caught four passes for 75 yards and one touchdown. Chase Politte had one catch for 39 yards.

Combs commented on the game, saying, “We are doing great with keeping our heads up when we play. We play like a different team this year. I have nothing but high hopes for the rest of the season.”

Coach Rouggly concluded, “We will continue to work hard at what we do. Our kids should be commended on their 3-0 start, but also realize we have work to do. A very good St. Pius Football team is waiting for us next Friday.”

Sean Usery added, “The team is doing amazing right now. There’s small mistakes that we need to fix, and once we can fix those our team is going to have a great season.”

Jefferson will now prepare to travel to St. Pius this Friday, September 17th, to challenge the Lancers, as they look to keep their undefeated streak alive.