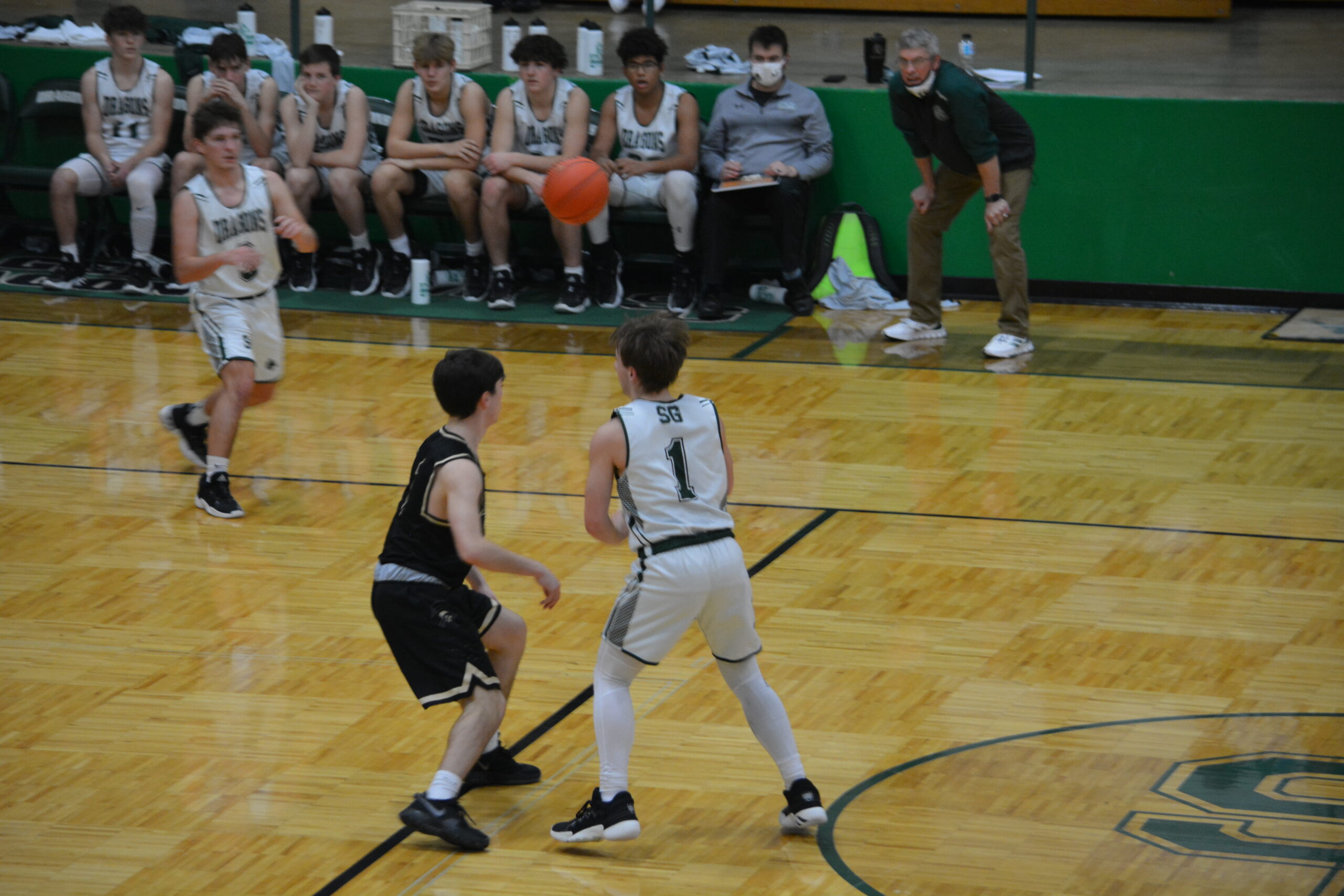 Ste. Gen Basketball Strikes First in Third Matchup with Farmington; Moves to 9-5 on the Season

In the third matchup of the year against Farmington, the boys from Ste. Gen Look to win the tie breaker after going 1-1 against the Knights.

The Ste. Genevieve boy’s basketball team cruised to a win over Farmington this past week, taking the 76-58 win and moving to 9-5 on the season.

“I am very proud of our guys and their effort,” said head coach Rob Coleman. “We played with more energy and passion that we had all year.”

Coach Coleman has every right to be proud of these young men. Ste. Gen beat Farmington early in the year to win the Sullivan tournament and Farmington got their revenge in the Parkhills Holiday tournament. Coleman was also facing veteran head coach Terry Noble, who’s been coaching and around the game forever and knew he’d have his team prepared to win this round.

The Dragons were tested in the first quarter by a Knights squad prepared for battle. Farmington tried to put the pressure on defensively, but that led to the Dragons going to the charity stripe to pick up most of their first quarter points.

After a close first quarter, Ste. Genevieve applied their own brand of pressure, putting the Knights defense on their heels as Ste. Gen started scoring at will. Anthony Nash applied most of the pressure draining two buckets from the field and nailing another from downtown. Nash wasn’t the only factor, Blake Morganthaler added another six points with two dimes from beyond the arc. Toss in the rest of the Dragons crew and you get another 16 points, making it a 29 point second quarter explosion. Ste. Gen headed to their locker room with a 43-17 lead.

The Dragons opened up shop to start the second half, getting another 20+ point performance from their offense. Ricky Hunter decided he was done missing out, Hunter banged two of his own shots from deep and another from the field, leading with eight points in the quarter. As per usual, the rest of the gang got in on the fun adding another 16 points. While their offense shined, their shutdown defense was what helped them take a 67-45 lead heading into the fourth quarter.

“I think we did a good job on defense forcing turnovers and staying in front of the offensive player. We attacked the basket really well and got them into foul trouble which helped get us open shots on the perimeter,” said Logan Trollinger.

The Dragons were able to breathe easy in the final 10 minutes of play, getting up by as much as 29 with three minutes to play.

In the end, Ste. Genevieve took the 76-58 to win their fourth game in a row, behind a game high 16 points from Ricky Hunter. Along with Hunter, Logan Trollinger added in 15 points , while Aiden Boyer and Rudy Fleig chipped in 14 and 10 points, respectively.

“We came out hitting our shots and making big stops and we kept on pushing until the game was over,” said Chaytin Lea.

“I told the guys this was the result from all the hard work and competitive practices we have been having,” said Coach Coleman.

Next up for Ste. Gen is Desoto and we’ll see which Dragon can fly higher… Our bet is on the Dragons! Tip-Off is at 7pm

Ste. Gen Basketball Strikes First in Third Matchup with Farmington; Moves to 9-5 on the Season