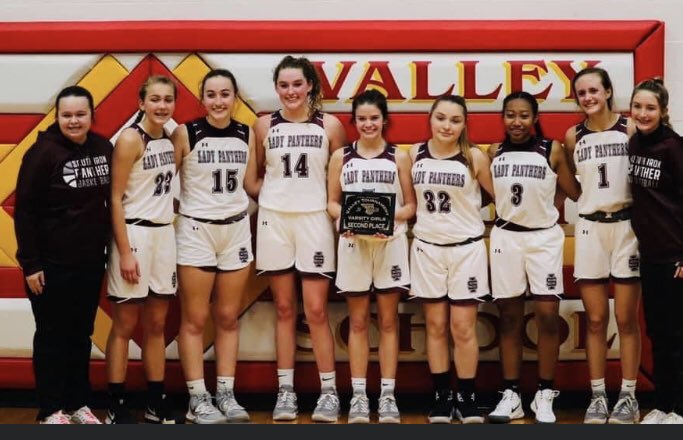 The West County Bulldogs beat the South Iron Panthers 48-46 in the Valley Caledonia Tournament Championship. West County avenged last season’s loss to the Panthers that was also in the championship game of this same tournament.

The South Iron Panthers suffered a heartbreaking 48-46 loss to the West County Bulldogs in the championship game of the Valley Caledonia Tournament.

South Iron started in attack mode. They scored  14 first-quarter points and suffocated West County defensively, taking a 14-3 lead into the second quarter. West County figured something out offensively in the second and scored 14 points of their own. South Iron scored 11 and went into the half with a 25-17 lead.

The contest stayed tight in the third. Each team scored 13. South Iron entered the fourth quarter of the championship game with a 38-30 lead. The game slipped away from the Panthers in the fourth. They began to have difficulty finding the bottom of the net and West County had its biggest quarter of the game.

“I think we were sped up a lot,” Anna Parker said. “I think what we could’ve done differently to come out with the win was to slow down on offense so we could get better shots.”

The Bulldogs outscored South Iron 18-8 in the fourth. They took down the Panthers as well as the tournament championship.

“I believe that we gave our all-out effort but we made many little mistakes that helped West County throughout the game,” Megan Lashley said. “My team and I realize what we could improve on and we’re striving to get better for when we face great opponents in the future.”

Madison Ayers played 31 minutes and scored a team-high 20 points. She also had eight rebounds and two steals. She was the only Panther scoring in double-digits. Allecia Cornell had nine points, three rebounds and four steals. She also went 2 for 5 from beyond the arc. Drew Gayle scored eight points and went 4 for 6 from the field. Enzley Dinkins and Lashley scored four points each. Dinkins also added three assists and seven rebounds. Lashley had two assists and five rebounds. The team shot 33 percent from the field as a whole.

“These types of games help us sharpen ourselves both physically and mentally, which ultimately helps us grow,” head coach Lawrence Graves said. “We saw a lot of good things out there against West County. As a team, we are going to learn from the moments that we didn’t do so well and move forward.”

An early-season loss can humble a team with such high expectations. This was a learning experience for the Panthers. They are 2-1 and have their entire season ahead of them. If there is ever a time to lose, it is early in the season. South Iron will look to get back on track Tuesday, Dec. 8 against Ellington.