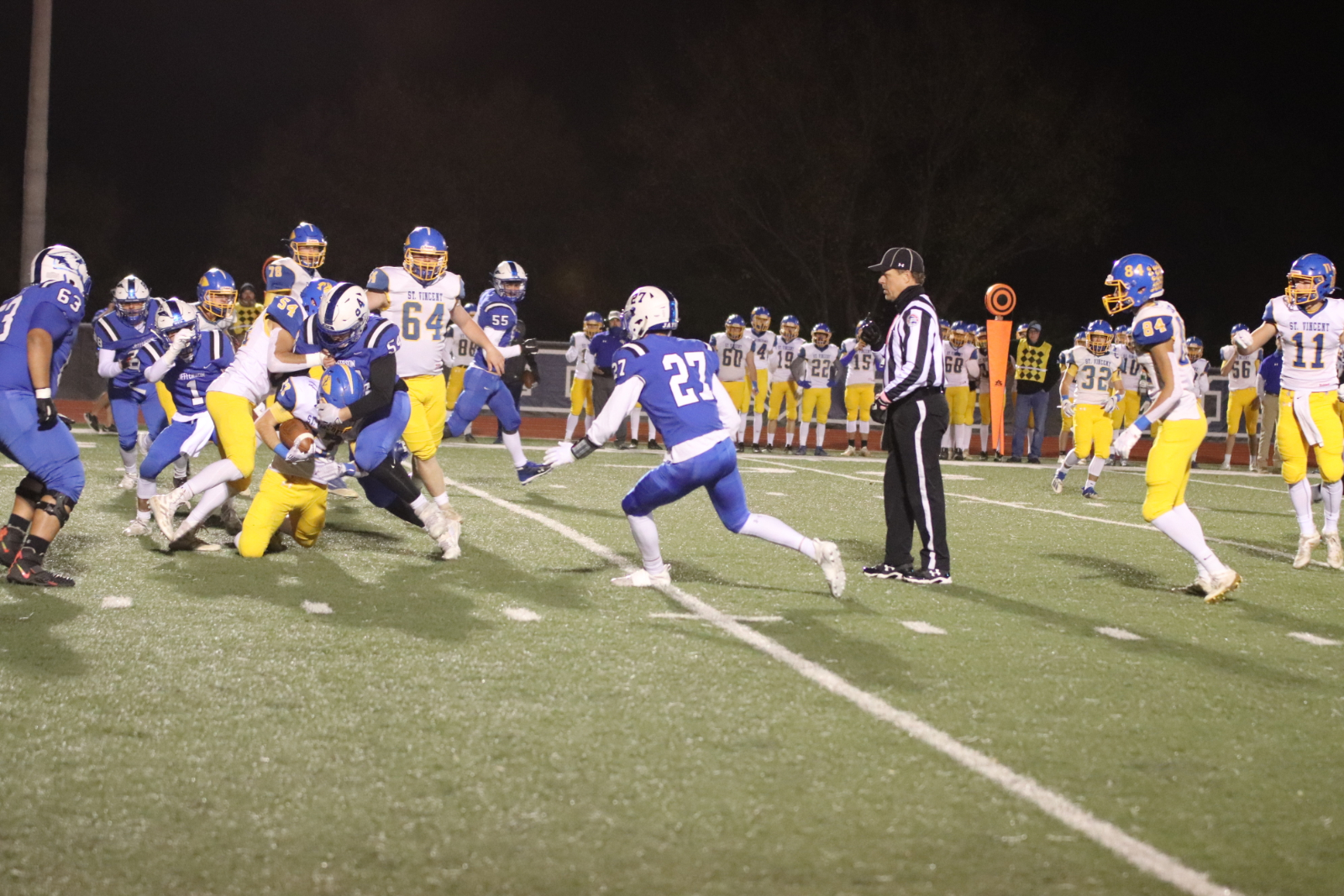 Jefferson Comes Out on Top in Back and Forth Game

The Blue Jays defense protects a late lead in a 35-28 win over St. Vincent on Homecoming night!

Friday night was another fast-paced, high-scoring affair for the Jefferson Blue Jays. The offense led the way, but the defense held strong and protected the lead. When all the dust had settled, it was the Blue Jays walking away over the St. Vincent Indians by a score of 35-28, for a special Homecoming game victory. Head Coach Alex Rouggly stated, “This was a game of two teams who were red hot coming into a very meaningful week-nine football game. Our kids were completely locked in.”

Dylan Schnitzler opened the scoring on the first possession with an eight-yard run for a touchdown. Will Breeze added the extra point for the early 7-0 lead. That lead wouldn’t last long though as St. Vincent scored two touchdowns on back-to-back possessions that gave the Indians a 14-7 lead. With just nine seconds left on the clock in the first quarter, the Blue Jays fired back, scoring on a monster 47-yard touchdown run by Colby Ott. Breeze again was successful on the kick, tying the game at 14 apiece.

St. Vincent was first to score in the second quarter, jumping ahead 21-14. However, it was D. Schnitzler again with a rushing touchdown from four yards out to answer back. Breeze tacked on the extra-point tying the game, 21-21. Rouggly commented, “The resiliency shown by our young men throughout this game was fantastic. They stayed level headed all night and put themselves in a position to win a big football game.”

Three minutes later, Ott took a handoff four yards for a touchdown. Breeze notched another point, giving the Blue Jays a 28-21 lead. The defense did its job, and the held off the opposition for the final 2:07, which allowed Jefferson to carry the momentum into halftime. Ott noted, “The offensive line did a great job opening up some holes for the running backs. We’re a really hard team to guard because we have so many weapons.”

In the third quarter, D. Schnitzler scored again, this time on an 18-yard run. Breeze nailed his kick, and gave Jefferson the lead 35-21. The defense blanked St. Vincent in the third, giving Jefferson a two touchdown lead going into the final quarter.

St. Vincent wasn’t done yet though, as they managed to score early into the fourth quarter, narrowing the lead to 35-28. Jefferson didn’t score again in the game. However, the defense continued to come up big and held off the Indians for the final 10:44 of the game, giving Jefferson the victory. They locked in the prized Homecoming win with a final score of 35-28.

Rushing was the name of the game for the Blue Jays in this one as they managed to rack up 312 yards on 44 carries. Ott and D. Schnitzler were the main rushers for the team, each with 18 carries. D. Schnitzler was responsible for 126 yards and three touchdowns, while Ott ran for 166 yards and two touchdowns.

Passing made up the other 61 yards, as Quarterback Drew Breeze connected on six of nine attempts. Ott received three passes for 38 yards, and Will Schnitzler had two catches for 27 yards.

The Jefferson defense had an outstanding game, setting a school record for sacks with seven. Dawson Jakoubek was seemingly everywhere with 13 tackles, and one sack. Jakoubek was complimentary of the defensive efforts, “Our line flat out dominated all night and put a lot of pressure on the quarterback to force him to make mistakes.”

Jefferson will now prepare for next Friday’s match-up against St. Pius X. Breeze was very happy with the efforts of the entire team, “We had great execution on offense and all of our DB’s stepped up greatly. Boyer and Ott played great defense which led to big plays being made. W. Schnitzler also came up big with an interception. And lastly, Deal getting things done on defense and offense, you really can’t ask for better effort from our guys!”

Rouggly noted, “We are extremely proud of all of our young men. They deserved to win this football game. We also want to thank everyone who made our homecoming week so successful. This was a special week, that our kids will remember forever. We now have to put our focus on another big week ahead, with a battle against a very solid St. Pius Lancer football team.”

Jefferson Comes Out on Top in Back and Forth Game