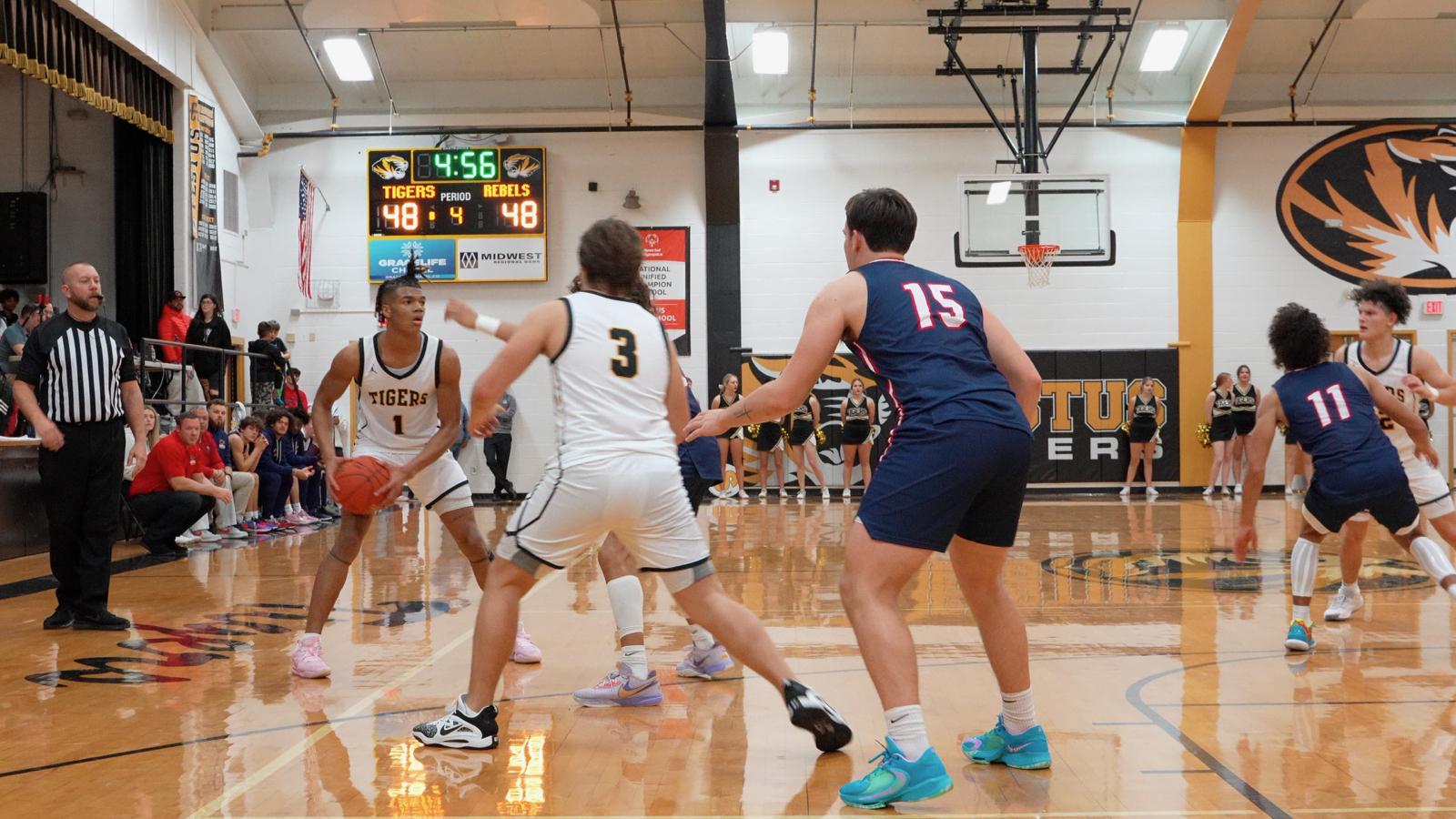 Tigers and Rebels Gut it Out in Tight Matchup

The Festus Tigers and Central Rebels duke it out in an early season battle that lands Festus’ way with a 57-52 victory.

Both of these talented teams are just getting started this year, but the Tigers have kicked off their season 2-0 after Friday’s 57-52 victory, and the Park Hills Central Rebels are now 0-1 after having to travel to Festus in defeat.

This was not a light affair though. These teams traded leads like currency and it was a furious fight the entire night.

The Rebels came out firing on a foreign soil in the first quarter and dropped 14 points on the stunned Tigers, helped by a pair of three-pointers by Caden Casey. But Festus came roaring back in the second with 16 points. They were led by Arhmad Branch, who after putting up five in the first, followed with another six in the second.

Jobe Bryant was big on the free-throw line, and hit three of four shots in the second quarter, but the Rebels couldn’t muster much offense with just seven points. That made the score a razor-thin 23-21 Festus lead at the halftime break.

The Rebels took advantage of Tiger turnovers in the first quarter, but Festus contained and maintained the rest of the way with just two TOs the rest of the game. It was a pick-em heading into the second half.

The whistle blew and then the third quarter was nuts. Both teams, scored 17 points to keep the score the same, but Branch and Casey kept up their high level of play. Casey hit three from downtown for nine of the Rebels points in the quarter and Branch hit three buckets and a trey to keep the Tigers in the lead.

Jeremiah Cunningham was huge at the charity stripe in the third as he was consistently fouled and hit 4-of-5 five from the line, while the Rebels didn’t have a single free throw attempt. It was 40-38 Festus heading into the final eight minutes.

Central knew Branch was the biggest threat, so he was hit early and often, but managed to nail 6-of-10 shots from the line. That, coupled with a big three from Hunter Bates, pretty much sealed the deal for the Tigers. They amassed 17 points in the final frame, and while the Rebels managed 14, it still wasn’t enough to overcome their previous deficit, despite a seven-point effort from Bryant.

Branch was a stud in this one, scoring a game-high 26 points, while Bates had a big night with his clutch fourth-quarter three and led the team with eight rebounds.

Casey was the leader for the Rebels with 15 points, all coming from behind the arc. Bryant was nipping at his heels though with 14 of his own, and Tristan Stewart was a beast on the boards with a game-high nine rebounds. He chipped in with eight points on the scoreboard as well.

Tigers Head Coach Jason Therrell respected the matchup by saying, “It was an entertaining early season game. Both teams are very athletic.”

On the same page, Rebels’ Coach Mark Casey quipped, “It was a tough one for us but a good learning experience. There will be a lot of takeaways we will get from it that will help us get better as the season goes on. Festus deserves a lot of credit. They played a very good game. They had a good game plan and executed it well. They are a tough team and are going to give a lot of teams problems all year.”

It was a toughly contested affair, but both teams played a heck of a game. They’ll look to get back to action on 12/5 as Central takes on Northwest Cedar Hill and Festus will battle Seckman on 12/6.

Tigers and Rebels Gut it Out in Tight Matchup