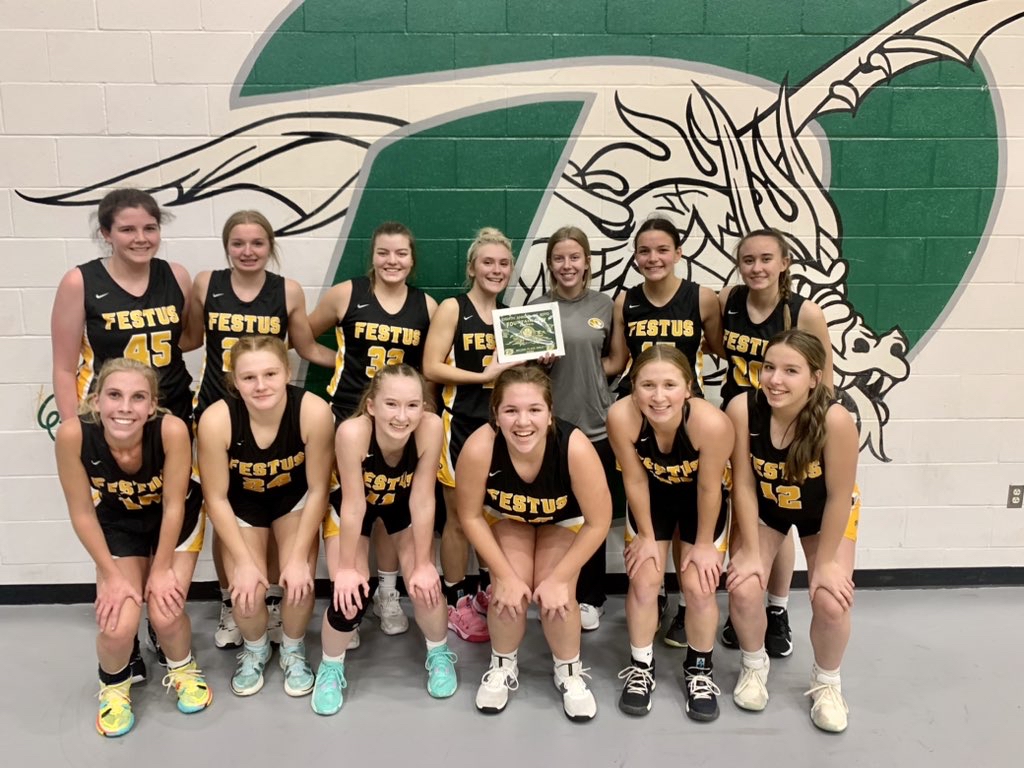 The Festus Girls Varsity Basketball team goes 2-1 and finishes 2nd in the Fountain City Class to move to 3-1 on the season.

The Festus Girls Varsity Basketball team had a fantastic week, going 2-1 and taking 2nd place in the Fountain City Classic Tournament in DeSoto. And they had to play the final game without their best player. Josie Allen, the team’s leading scorer, was sidelined for the tournament finale.

Still, the Lady Tigers gutted it out and showed grit and poise on the court to move to 3-1 on the season.

The Tournament kicked off on Wednesday against the host team, the DeSoto Dragons. The Tigers used a 13-point first quarter to get the ball rolling and found themselves up 21-19 in a tightly contested battle going into the half. But they would pull away in the third frame with a massive 15-4 advantage, and didn’t take their foot off the gas.

They won the fourth quarter battle 13-6 and held on to win 49-29 to move on to the Semifinals. The biggest difference in the game was turnovers. The Tigers didn’t have a single one in the first quarter, but recored 10 in the second. They committed just two the rest of the way, proving that when they hang on to the ball they win.

Allen led the way with 22 points, seven rebounds, six assists and six steals, while shooting 50% from the floor. Ciara McDonald had 11 points and 10 rebounds for the double-double, shooting 75% from the line (3/4) and 80% from the floor (4/5). Alyzah Skaggs had eight points and eight rebounds.

Head Coach Steve McFarland touched on the game, saying, “We didn’t play poorly, but made some mistakes that are to be expected when only two of your top seven players have Varsity experience and the others are Freshmen and Sophomores.”

The Semifinal match pitted the Tigers against the Seckman Jaguars, and this one came down to the wire. Festus led from the jump, outscoring Seckman 10-9 and 13-4 to go into the break with a 23-13 lead, but the Jags came back hard in the second half.

They matched the Tigers 7-7 in the third and then took advantage in the fourth when Allen went out with a knee injury, outscoring Festus 14-10. The Tigers bent but didn’t break, and hung on for the 40-34 victory, earning a trip to the Finals.

Allen, despite getting injured, still led the team with 16 points and had five rebounds and two steals before exiting. Others stepped up in her absence. McDonald had five points and nine rebounds, Elizabeth Skaggs notched six points, two assists and two steals, while Mya Courtois had seven points and a pair of steals as well.

Coach McFarland on the win: “We used free-throw shooting to maintain our lead through out the fourth quarter and did a good job handling the pressure that Seckman applied after Josie Allen left the game.”

The Finals would be a different story though, with the Tigers having to trudge through without Allen. The St. Pius X Lancers are no easy match even with a full roster, and the Tigers just couldn’t catch up in this one.

They didn’t score a point in the first quarter, while Pius put up a ridiculous 23. Festus bounced back in the second with 10, but still trailed 34-10 at halftime. They owned the second portion of the game though to make a go of it, but ultimately fell 52-30, despite outscoring the Lancers 20-18 in the second half.

Playing without their scoring leader and main ball-handler the Tigers saw several other players step up.

Courtois (3) and Delaney Schmitt (2) combined to hit 5-of-11 from 3-point range and Olivia Madden, just a Freshman, made the most of her first Varsity action by playing a well-rounded game offensively and defensively. Another Freshman seeing her first Varsity action was Addison Smith. She pulled down three rebounds and had a steal in limited action.

Courtois led the team in scoring with 12 points and had four rebounds and three steals. Her Coach, had this to say after the Tournament exit, “Turnovers were a problem from the start in this game. Combined with poor shooting in the first quarter we fell into a hole that they couldn’t climb out of.”

Still, not a bad effort without your superstar. Hopefully Allen heals up and the Tigers can continue to roll. They take on Northwest Cedar Hill on 12/8.